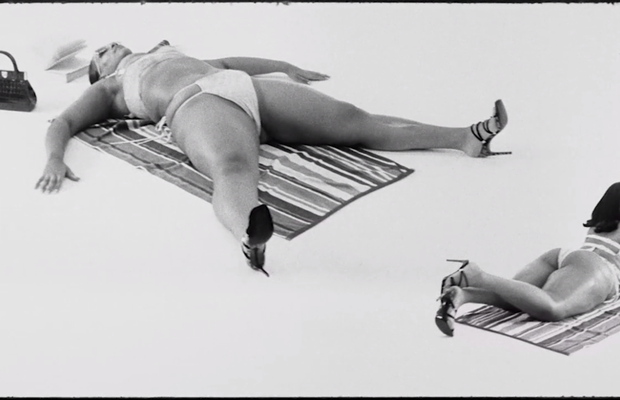 In Women Walking, Stink director Netti Hurley faces down the male gaze, fighting how women are portrayed today with a powerful vision of female sexuality. The two-minute short deconstructs the contemporary idea of glorified female body norms and presents us with women unafraid to be themselves on camera. As a series of black and white vignettes depict women in a variety of domestic scenarios - sunbathing, watching TV or just walking across the screen - dressed in lingerie, bikinis or nude, it’s apparent in their demeanour that they are owning their bodies and the viewer’s perception of them. Paired with the lyricism of Merc The Big Body Benz - an MC from Queens, New York - the piece is a clear statement on the beauty and strength of the female body.
LBB’s Alex Reeves spoke to Netti to understand what went into the film.

LBB> Where did the first germ of an idea that became this film come from?

Netti> From Helmut Newton’s ‘Women Walking (1981)’. It made me think about how beauty ideals are transitory, and that the strength of the subject is defined by the photographer and the audience. And so the power is with us.

LBB> When did you decide it was going to be the film you ended up making and why was that the pivotal moment?

Netti> I don’t think it ever had that deciding moment - it was a process that kept developing until the final delivery. That was what made it special, the way it evolved and the collaborative aspect.

LBB> As much as the status quo on how the female body is perceived is still far from good, there has been a lot of discourse and art around the subject. How did you envision this film interacting with that existing backdrop at first?

Netti> I think you just have to do it. Say it how you feel it. And then it’s up to the audience how they consume it. But ideally I wanted it to challenge any potentially rigid perspectives that exist towards women and beauty ideals today.

LBB> You say it's inspired by the work of Helmut Newton. Why is his work such an influence here?

Netti> I love the strength of Newton’s female subjects. And that as the creator, you have the choice of how you choose to empower your subject. This was a really strong message for me.

LBB>  Where did the poem / voiceover come from? How does that interact with the visuals of the film, as you see it?

Netti> Merc The Big Body Benz was someone I had wanted to work with for a while, and this seemed like the perfect project to collaborate with her on as lyrically and personally she really embodied the message that we wanted to communicate. Once it came to the cut it was important that her vocal existed over the credits as I wanted people to really listen.

LBB> How did you cast the film, seeing as you had a clear vision about how you wanted to represent women’s bodies?

Netti> It was a collaboration with Brother Model’s Curve Board. The beauty of these models led the idea and inspired the ideas, concept and representation of the female body.

LBB> What is your enduring memory of the shoot?

Netti> The energy of the shoot - the feeling in the studio that day was really special.

LBB> How do you hope people will engage with the film?

Netti> I hope people feel it, that it inspires them and that it motivates them. I hope it makes women feel represented, understood and relieved. And that it might inspire a different expression in the media moving forward.

LBB> Is there anything else you'd like to add?