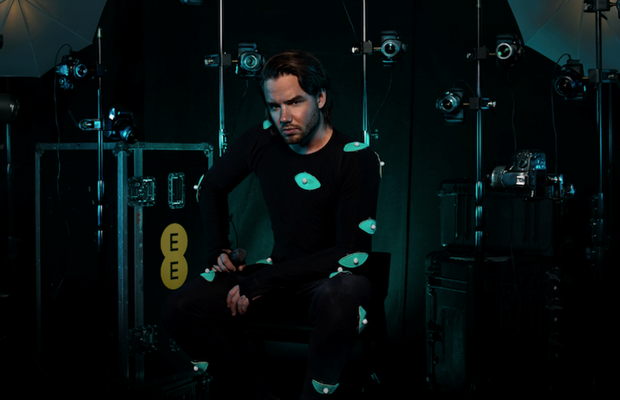 Platinum-selling artist Liam Payne performed in an EE BAFTA world-first, real-time augmented reality (AR) mobile experience on Sunday, ahead of the EE British Academy Film Awards. The real-time AR experience, which has been created using EE’s award-winning 5G network, was recorded live and beamed to fans in the UK on their mobile phones via the AR app ‘The Round’, wherever they were. This will be the first-time fans get a look at Liam’s avatar before his 5G-powered EE BAFTA opening performance on BBC One.

On the night, Liam’s body, facial movements, and live audio data were instantly transformed into 3D animations to create the immersive experience. For the first time ever, this data will be live-synced and transmitted in real-time for fans across the UK to experience the performance live through their mobile handset, whether they’re at home or on-the-go.

Following the first-of-its-kind AR app performance, the avatar will join the real-life platinum-selling artist as a hologram on the stage of Royal Albert Hall, as part of a spectacular EE BAFTA opening performance at 7pm on BBC One.

Having recently celebrated hitting 5.1 billion streams worldwide and having sold more than 23 million singles as a solo artist, BAFTA viewers can expect Liam to put on a show like never seen before. Surprising and delighting fans across the globe, Liam’s avatar performance will be incorporated into the innovative stage production, through state-of-the-art holographic technology, powered by EE’s award-winning 5G network.

Liam Payne in Your Pocket

The UK’s number one network will put this next-level experience in the hands of fans across the UK by offering the chance to get a first-look at Liam’s one-of-a-kind avatar, through a custom-built AR app, ‘The Round’.

The immersive AR experience has been tested using EE’s award-winning 5G network on the ground-breaking Samsung Galaxy Z Fold2 5G handset. For those watching from home, or on-the-go, ‘The Round’ app’s pioneering technology is optimised to be viewed on single-screen mobile handset*, and available to fans on any mobile network.

Liam’s real-time performance will be captured in perfect synchronicity as he wears a custom-made inertial motion capture suit containing sensors that pick-up the artist’s every movement, and a specially designed headset that tracks his facial and live audio. This data will be instantly transmitted to the 3D AR app animation, which is beamed live to mobile handsets for fans to enjoy in the comfort of their own environment – whether that be their living room, garden or on public transport.

The experience highlights how 5G will transform the future of virtual performances and entertainment, so this coming Sunday we’ll be using our network to show how the next generation of mobile connectivity is helping to deliver the best experiences and enable fans to enjoy real-time performances on-the-go.

Ahead of his EE BAFTA performance, Liam Payne said: To be able to perform live via my very own Avatar blows my mind a little bit…! I’m really excited for everyone to see what we’ve been working on. The strides in tech at the minute are phenomenal and I can’t wait to see what we’ll be doing next. For now, this Sunday, you can take a first-look at my EE BAFTA performance, delivered by my real life Avatar live in your kitchen, bedroom, on the bus or at the park…see you there.

Emma Baehr, executive director of awards and content at BAFTA, said: “We’re so excited to be opening Sunday evening’s show with something very different this year. Liam Payne’s performance, through the transformative power of EE’s 5G technology, will bring the show right into people’s homes, kicking off an evening of entertainment and celebration. I look forward to what will no doubt be a one-of-a-kind performance.”

Marc Allera, CEO of EE, added: “While the EE BAFTA Film Awards might look a little different this year, we’re using our award-winning network to provide an unmissable evening of entertainment. Whether you’re a customer or not, we’re bringing you closer to the action than ever before with two incredible performances from Liam Payne: our EE BAFTA AR real-time music performance at 6:45pm, available on mobile, followed by Liam’s 5G-powered opening performance on the BAFTA stage on BBC One. And we're delighted to give our EE 5G customers a front-row seat to Liam’s AR performance on their mobiles. Thanks to our superfast, reliable 5G connection, they won’t miss a beat!”

Pip Brignall and Thomas Winsor, founders of The Round app, said: “We are dedicated to finding unique ways for artists to express their creativity and tell engaging stories. With our advanced AR technology and EE’s 5G network, the world really can become a stage! Our virtual venue offers a meaningful and intimate experience at a time when we are all craving those personal connections. Liam is such an incredible artist, so we're sure fans will be delighted to have him in their front rooms as a holograph, putting on a show!”

EE has been a long-standing partner of the EE BAFTA Film Awards for the past 24 years, working with BAFTA to bring film fans closer to the awards through the magic of technology. Having used its award-winning network to create new and exciting opportunities for film fans to be part of the action on the red carpet, including the world’s first 5G-powered AI stylist, and the world’s first 5G-powered AR dress, worn by Maya Jama.

Download the live performance facilitating AR app, ‘The Round’, on the Google Play and Apple App Store to experience this ground-breaking EE BAFTA AR performance, created using EE's award winning 5G network, on your mobile, wherever you are this Sunday 11th April at 6:45pm.

The EE BAFTA Film Awards will take place over a weekend of celebration across Saturday 10th and Sunday 11th April. Saturday’s show, hosted by Clara Amfo, will be broadcast on BBC Two and BBC Two HD, with Sunday’s show across BBC One and BBC One HD from 7:00pm – 9:00pm. The prestigious EE Rising Star Award winner will be announced on Sunday, crowning one of the talented nominees; Bukky Bakray, Conrad Khan, Kingsley Ben-Adir, Morfydd Clark and Ṣọpẹ́ Dìrísù, the unique aqua trophy to take home. Voting is open until midday on April 9th 2021 at the website.

Ahead of the show on Sunday 11th, radio and television presenter Clara Amfo will also be interviewing award presenters from Royal Albert Hall as the official EE presenter. Through the magic of technology, Clara will also be interviewing Award recipients as part of EE BAFTA’s ‘Winner Reactions’. All exclusive content and interviews will be available on EE’s social channels throughout the evening on Sunday 11th April.