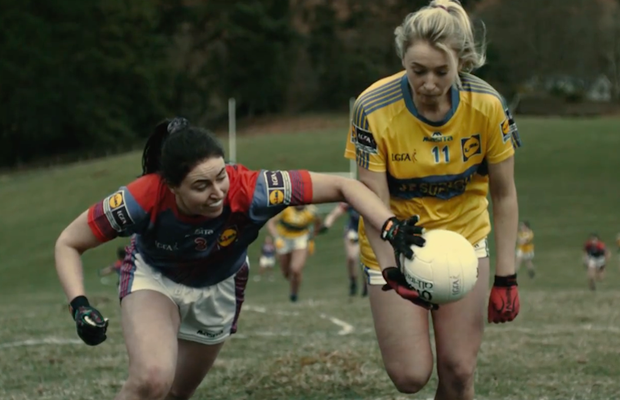 A powerful new campaign by BBDO Dublin - https://bbdo.ie - on behalf of retailer Lidl Ireland, went live this week to mark its sponsorship of the Ladies' Gaelic Football Association (LGFA). Launched across TV, OOH and multiple digital channels, ‘Level The Playing Field’ is a campaign that acknowledges the generations of players who have battled for equality and is a rallying cry for all present and future players.

With the aim of highlighting the fact that the battle to level the playing field in sport is an ongoing one. Lidl Ireland have been serious supporters of the LGFA since 2015 and during that time, the profile of both the sport and the players has risen to previously unseen levels.  But the women of the LGFA are still up against uneven odds with comparatively fewer resources, less coverage and less recognition of their achievements.

Art directed by Rob Murray, and copywritten by Des Kavanagh, who spoke about how significant the location was in making such a visual impact: “We had always wanted to shoot the film for real, to capture the visceral nature of the ongoing struggle to level the playing field, a CGI representation of the game held no appeal for us. The Glendalough (Co. Wicklow) location that Red Rage our production partners provided, worked perfectly. The hill was incredibly steep and the surrounding landscape was incredibly dramatic.

This allowed us to not only portray the intense effort involved in fighting inequality but also to show how necessary and beautiful the end goal of equality is, for all the women and players involved. It was the perfect physical and metaphorical space.”

Since 2016, Lidl has invested more than €4 million into the partnership with the LGFA and during this time, ladies football players across the country have noticed significant changes in how the game is perceived thanks to the support of the retailer. According to research carried out on behalf of Lidl Ireland in 20201, 85% of LGFA female members recognise the uplift in support over the last four years, specifically in the media and among the general public. The research also found that 51% of females claim that they are currently participating in sport, an increase from 2017. However, 31% of girls who used to participate in sports stated they stopped playing in primary school with over a third claiming the reason for this was because their friends were not playing.

“At Lidl we are dedicated in supporting the phenomenal effort the LGFA players put in. It’s important to recognise their achievements and make people aware that the challenge for a level playing field is an ongoing one. Both teams featured in the ads are St Sylvester’s from Malahide and Robert Emmets from Perrystown, Co. Dublin, and demonstrate how seriously they take the sport as we are passionate in supporting it.”, added Fiona Fagan, deputy head of marketing at Lidl Ireland.

On Monday, 15th February, a fundraising initiative launches in store and via the Lidl Plus app to raise much needed funds for their local club.

Speaking about the agency’s work, Sinéad Lee, agency director leading the account added: “We began working on this campaign over a year ago, just before the Covid-19 lockdown was put in place, so we are absolutely delighted to finally introduce it. We wanted to create something that really dramatised the challenges that LGFA players face and the mountain metaphor that writer Des Kavanagh and art director, Rob Murray based the concept around, does that in a visually powerful way.”

Lidl Elves Have Re-Entered the Building for Joyous Christmas Campaign