Walrus’ Jillian Dresser, Chrissy Mihaljevic, and Olivia Johansson discuss getting to know the region and how the campaign has fared in target markets 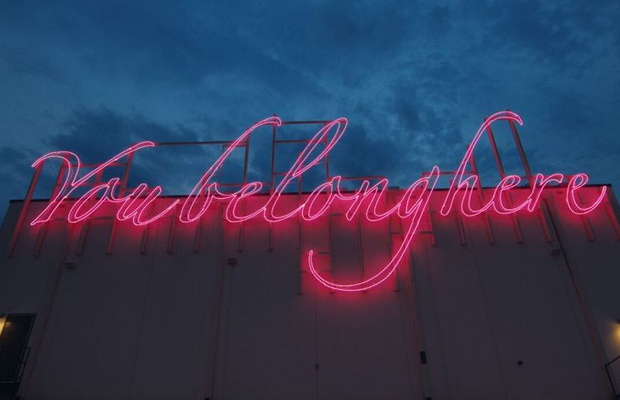 Large scale working from over the past two years of Covid-19 has caused a huge shift in how people want to live their lives. It’s no longer apparent that to perform well in many job requires five-day-per-week presence in an office in select big (and expensive) cities. So, people are looking further afield.
The Northwest Arkansas Council wanted to get in on the action, and so, along with New York agency Walrus, launched ‘Life Works Here’, an appealing campaign that extols the cultural, economical and nutritional virtues of living in the area.
A few months on from launch - and with some results to reveal - we spoke with Jillian Dresser, creative director, Chrissy Mihaljevic, account supervisor, and Olivia Johansson, senior integrated producer.

Q> What’s the purpose of the ‘Life Works Here’ campaign, and what is it trying to achieve?

Chrissy> The purpose is twofold. We need to raise the awareness of Northwest Arkansas and then change the narrative by rewiring the way people think about it. We need to help our target audience realise that it’s actually an attractive and relevant option. People don’t know much about it, so we’re trying to change that and bring it to life.

LBB> Where did the ‘Life Works Here’ brand platform come from?

LBB> What did the clients think about the idea when you ﬁrst shared it?

Chrissy> It was the favourite concept right out of the gate. We had multiple stakeholder meetings, and it just kept rising to the top. It was simple, it encompasses everything Northwest Arkansas has to oﬀer, and it connects with ambitious talent who are looking to contribute to the community, grow their career, but also have that work life balance that we all crave.

LBB> What do you think would surprise people about Northwest Arkansas?

Chrissy> There’s a lot of natural beauty and unlimited recreational opportunities. Everything from aviation to biking and hiking, world-class museums, theater productions, and lots of seasonal events. And there’s an incredible food scene.
Olivia> One of my favourite things was the nature – how absolutely stunning it is. Coming from New York, it felt like I was free. I was like, "Oh my God, this is a place where I could seriously see myself living". But also the arts and the food scene was unbelievable.

LBB> Tell me about the campaign production process and the full scope of the project.

Olivia>  We worked with our reps to ﬁnd the perfect production partner, and a director for the campaign who shared our creative vision and eagerness to capture the beauty of this part of the country. [Walrus] and our director ﬂew in from New York, our line producer came from Portland, and our DP ﬂew in from Los Angeles.
The rest of the crew was all local to the area, about 30 people. We also worked with a local casting agency to cast real-people talent from Northwest Arkansas. So, it was a big production, but the biggest thing was the number of locations. We were shooting for three days at 30+ locations, which meant we had ﬁve to ten location moves a day. 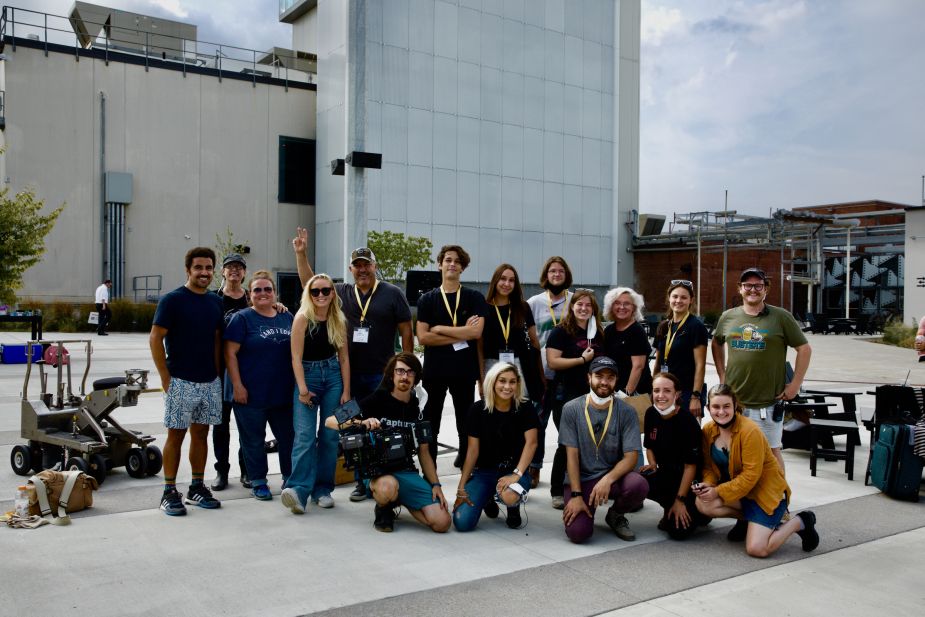 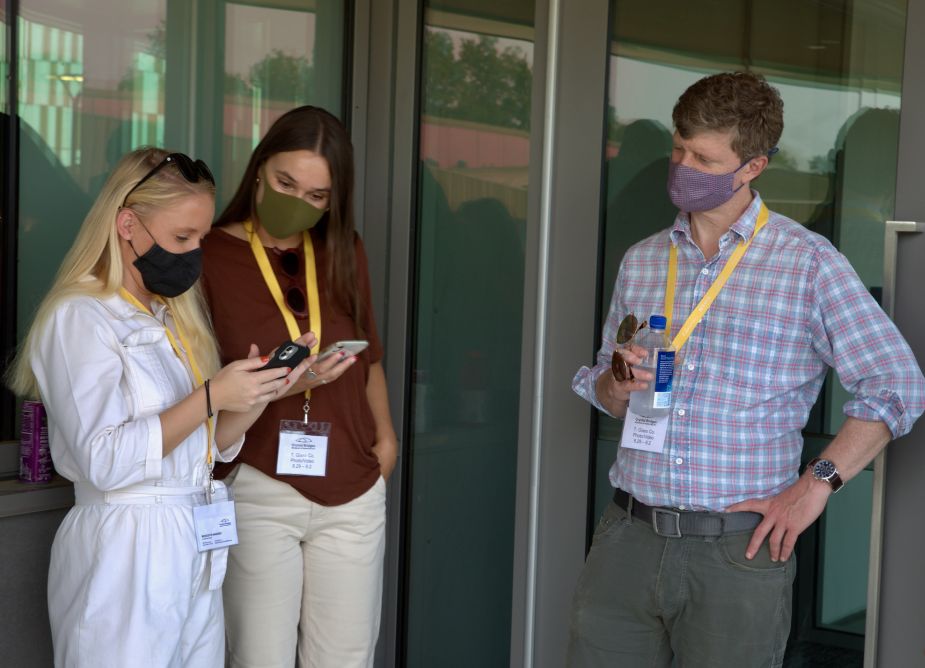 Walrus team members pose with some of the local crew

LBB> Wow, so you were on the move pretty much constantly.

Olivia> I want to give kudos to the local team for how fast we were up and down in moving to all of these locations, shooting not only stills and video, but drone footage, too. We were just covering the entire area, shooting everything we possibly could for three days nonstop.

LBB> What were some of your favourite locations you ﬁlmed?

Olivia> My favourite place to shoot was also the place that was the least accessible, the Coler Airship Coﬀee place. We literally had to walk through the woods to get there.
Chrissy> I loved shooting at The Momentary when we were inside capturing the art on the ground ﬂoor. I thought that was really cool, just a really beautiful shot.

LBB> What was the most challenging aspect of managing a large production like this?

Chrissy> Shooting that many locations in three days. There were so many location changes right down to the last second. That meant that Olivia and the team had to ﬁgure out how to shift the schedule to make it work. It was a constant moving target.
Olivia> And then the Covid aspect, you know, making sure people are vaccinated. How many tests did we do, Chrissy? Two in ﬁve days? And the crew was tested each morning. So it was just a whole other aspect to the shoot, making sure everyone was safe.

Olivia> The biggest change is you’re adding an hour to the schedule each day [for Covid protocols], plus the added cost for PPE and testing. It’s deﬁnitely a budget thing to be aware of. And I think we’re going to see this in productions for the next few years, unfortunately. We had a Covid Compliance Oﬃcer on set, making sure people had masks on, that there was hand sanitiser, that all the food was individualised. For me, it was just an amazing experience to be on set again. I've missed it so much, and I was so happy to be right there in the action again and not just watching the magic happen via Zoom link.

LBB> How do you keep Walrus clients really close to the process?

Chrissy> We bring the client into every key step of the process and make sure that we’re fully collaborating. There’s lots of transparency. We make sure that [the client] is happy and aligned before moving forward to the next step. [Our client] understands the pressures we’re working through, and understands where we need his involvement and guidance. He was super helpful in vetting things with other stakeholders and really making this happen.
Olivia> Jillian and Chrissy are part of the brieﬁng process and are working with the client so much sooner than I am, but the entire Walrus team did such a great job building trust with the client. I think you see a lot of that trust reﬂected in the ﬁnal edit.

LBB> What forces are at play that make Northwest Arkansas a prime option for relocation?

Jillian> We live in an unprecedented time. In some ways, I think drawing people to a new area is easy right now because a lot of people are still working from home. In other ways, it’s more    challenging than ever. So, I think it’s all about the messaging.
It’s important to meet people where they are in terms of their perception of the place you're advertising. Just saying, “Come to Arkansas, it’s really cool, trust us” isn’t going to work. No one’s going to believe you. But if you say, “Hey, we know what you think of Arkansas but let us prove you wrong,” you’re more likely to get people on board.
Chrissy> Lots of people are looking for aﬀordability, too. That’s a big thing people consider when they’re moving. ‘Life Works Here’ does a really good job of highlighting aﬀordability, and I think other places will catch on If they’re not already doing that.

LBB> What would you say is Walrus’ superpower in creating this type of work?

Jillian> Putting our audience ﬁrst. We talk with people, not at them.
Chrissy> We’re such a close-knit team and we just get stuﬀ done. I feel like a lot of the time, we’re on our phones calling each other trying to make it work and troubleshoot things. We’re always pretty open to being available to try and achieve what we need to achieve.

LBB> Seeing the campaign out in the world, what are you the most proud of?

Jillian> We started with rebranding the region, kicking oﬀ with a logo, a name, and a tagline. We built everything from the ground up. So for me, to see a campaign that has every single element that we’ve created is something to be proud of.
Chrissy> I think what I’m most proud of is that we are going to be able to show what we all know is so special about Northwest Arkansas – because we’ve been there. We’re really bringing that to life through the screen, and that’s really cool.
Jillian> We are all converts. I think we’d all move to Northwest Arkansas in a heartbeat.

LBB> How is the campaign performing?

Chrissy> We launched in four markets – Seattle, Denver, Minneapolis, and Austin – where our top tech, entrepreneurial, and creative talent live. And the great news is that the ‘Life Works Here’ campaign is working. We’ve seen a 185% increase in web traﬃc from Denver and Minneapolis, a 600% increase from Seattle, and a 500% increase from Austin. This tells us we can win on the coasts and in the heartland. And, we know location-speciﬁc messaging is hitting a nerve with the locals in our target markets. We’ve seen over 22,000 visitors to FindingNWA.com as a result of our paid digital ads, and over 2,000 people have looked into job opportunities on the site.
Jillian> Additionally, we partnered with PR ﬁrm Fleishman-Hillard to execute a series of promotional activations incentivising people to move to the region. The most recent was the ‘Bitcoin and a Mountain Bike’ activation that launched last week, and already we’ve seen a lot of press coverage, from CNBC and Insider to Bloomberg and Fox & Friends.
In 2021, our Relocation Incentive promotion oﬀered $10K and a bike for remote workers to move to the region, and the results blew everyone's expectations out of the water. 190+ media placements, 2.3 billion impressions, and 35,000 submissions and counting.
It’s clear that a combination of earned, owned, paid, and promotional activity has made signiﬁcant strides in raising the proﬁle and rewiring how people think about Northwest Arkansas. Overall, we are building a positive narrative about the region.

Chrissy> Walrus and the NWA Council are prepping for a phase two campaign launch mid-February 2022. We’ll continue to target key markets where prospective top talent lives and potentially introduce new markets. Overall, this is a multi-year eﬀort with the goal of telling a more cohesive and elevated story about all the amazing things that are happening in Northwest Arkansas.

Walrus Appoints Jeff Hale as Its First Head of Design

Production Line: Becoming the Master of Zoom with Valerie Hope