Created by ENGINE Creative and directed by TRAKTOR through Stink, the mobile network campaign depicts the British actor’s effortless stroll down a sunny boardwalk 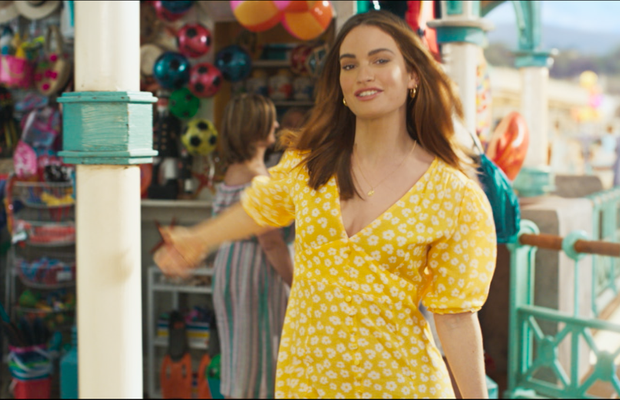 Sky Mobile has launched the next instalment in its ‘Hello Possible’ campaign in which British star Lily James shows just how easy it is to switch to the award-winning network.
The latest iteration in the Hello Possible campaign, created by ENGINE Creative, looks at how good life can be when switching to Sky Mobile is as easy as sending a single text.
In the new 30-second TV ad, Lily James takes an effortless stroll down a sunny boardwalk, which is every bit as easy as switching to Sky Mobile. Her journey is the smoothest you could possibly imagine, as she makes her way through a stampede of surfers before a Ferris wheel seamlessly whisks Lily up without her breaking stride.
Every footstep Lily takes unlocks another effortless example of just how easy it is to make the switch to the award-winning Sky Mobile when you “text to switch.”
The campaign launches across TV and VOD on ITV, Channel 4 and Sky Media, on April 2nd and will run for an extended period.
The TV ad, which was again directed by Patrik von Krusenstjerna through TRAKTOR / Stink, features The Beach Boys’ ‘Wouldn’t It Be Nice’ as the soundtrack.
For the shoot, Covid restrictions meant that flying to a warmer destination to work on location at an actual boardwalk was not a possibility, so ENGINE Creative collaborated closely with its production partners to build a set in a controlled environment at the Roger Moore stage in Pinewood Studios.
Covid testing was carried out rigorously each day on set, while a remote video village was assembled to enable the agency and client to join virtually from home. The visual spectacle was brought to life by a smooth post production process that involved presenting and feeding back on everything remotely. Many of these processes are new, but work so well that they will be retained far beyond the pandemic.
Pierre Coppin, director of marketing at Sky Mobile, said: In this new instalment of the world of possibilities, we show how the best things can be just a moment away. Want to switch to the best mobile network? All it takes is a simple text and you’ll be ready to switch to Sky Mobile in a split second.”
Leon Jaume, creative director at ENGINE Creative, said: “Wouldn’t it be nice to flee the English winter for sunnier climes and film the delightful Lily James beside the seaside?
“Not going to happen. Get your arses down to Pinewood on a frosty December morning and make it look good. Thanks to TRAKTOR and NINETEENTWENTY – and the delightful Lily James – that's what we did. And it does.”
The Hello Possible platform for Sky Mobile is born out of a belief that the old, rigid mobile networks of the past are too inflexible. Sky Mobile provides a welcome antidote, offering customers the freedom of a more flexible network and making possible what was not previously so.