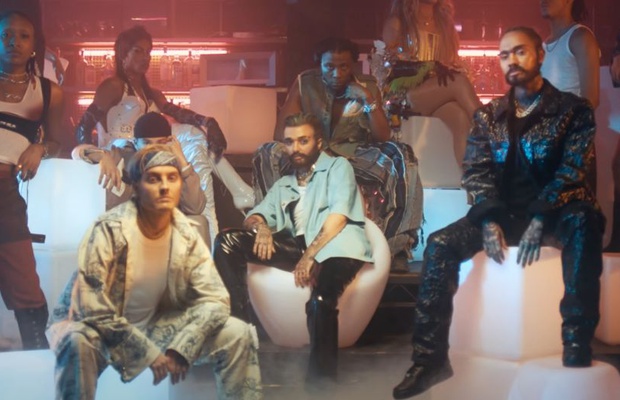 This week we saw Little Mix make history. They are the first girl band ever to win the best group category at the brits.

So it came as little surprise that the girls jumped at the chance to be transformed in to their male alter-egos, Pez, Lenny and J-Dog and perform in a dance battle against themselves.

The music video for the title track from Little Mix’s latest album 'Confetti' was released, featuring a new verse from US rapper Saweetie. This is the band’s first release as a three since the departure of Jesy Nelson.

In the words of director Samuel Douek, the film is “A love letter to London nightlife”. The project was very personal to him, casting dancers and party starters from his personal circle who he met on nights out and features icons from the latest Drag Race UK series – Bimini, Tayce and A’Whora. The feature has been described as, “Undoubtedly the most iconic crossover of all time”.

If you thought the three guys on the opposite side of the dance floor looked familiar, it’s because they are. The six-minute long film features Perrie, Jade and Leigh-Anne with fake beards, neck tattoos and contoured jaw lines created by feature film prosthetics artist Alexa Riva Ravina.

When Samuel presented the idea of Little Mix in a dance battle against themselves they jumped at the chance having always wanted to do a gender swap. Samuel collaborated closely with the girls, their stylists Zack & Jamie the prosthetics make up artist to develop the characters. Leigh-Anne said, “It was probably the funniest day of my life. It was hilarious. It’s the best video we’ve ever done.”

Little Mix have been known to champion the drag and LGBTQ+ community in their videos in the past. Jade has appeared as a judge on series one of Drag Race UK in 2019, with the bottom two queens lip syncing to Little Mix anthem, Power. Jade also has a podcast Series with Bimini Bon Boulash.

From a production point of view we were thrilled, the girls and their team were a dream to work with. It's the first film they have ever created that had no edit changes which is testament to the collaborative nature of the project.

Special Thanks to our queens

Jumping the Fence: Fredrik Bäckar on Directing with a DOP’s Eye