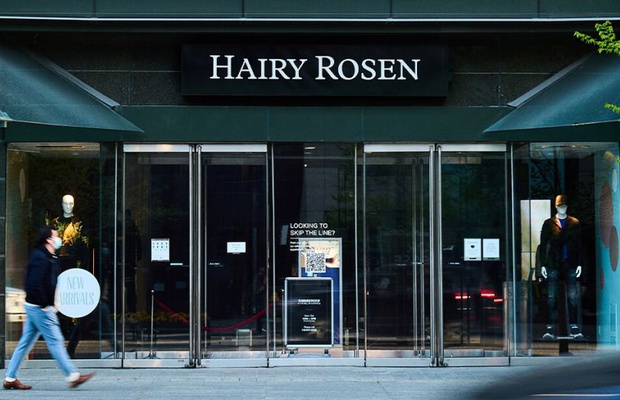 Harry Rosen has been tailoring men’s suits since 1954. And now the brand is making a slight alteration to its name. This Monday morning, people across Canada woke up to a peculiar site. After 67 years, Canada’s iconic luxury menswear retailer, Harry Rosen, had suddenly changed their name to ‘Hairy Rosen’. The signage on their flagship store in Downtown Toronto had been changed, as well as on their website, all social channels, and even employee email signatures. Canadians took to social media to express their confusion and to notify Harry Rosen that their signage has been misspelt.

The sudden name change is part of the menswear retailer’s launch of premium men’s grooming products. Following up the temporary name change is a content series entitled ‘Different Strokes,’ that aims to change the conversation around men’s grooming. The series features six men from different cultural and professional backgrounds discussing a topic that men don’t often talk about: their personal grooming routine.

The series features men who are role models on the public stage and in their communities, including Justin Bieber and Ariana Grande guitarist Dan Kanter, TV host Joey Salmingo, and Indigenous educator Michael Solomon, among others. Each story reveals the different ways men groom: from the empowerment that comes with deciding to shave your head to the cultural significance of long hair for First Nations men.

“This series really highlights all the ways men groom their hair, face and body, and speaks to the breadth and depth of our selection of grooming essentials,” says Harry Rosen Chief Marketing Officer Trinh Tham.

Developed with agency partner Zulu Alpha Kilo, the initiative is the next evolution of the brand’s Set the Tone platform, which launched in 2020. The retailer’s expanded offering, going from fashion to grooming stems from its founding principle—to help men with more than dressing well, but also to help them feel their most confident.

The Hairy Rosen sign change has already raised some eyebrows, with prominent Torontonians such as La Palma chef Craig Harding and others posing in front of the new sign and sharing it on social media organically.

Cairns Oneill handled the media buy for the campaign, which includes social videos, print, and digital.