Limited edition prints can be purchased via billboard interactions 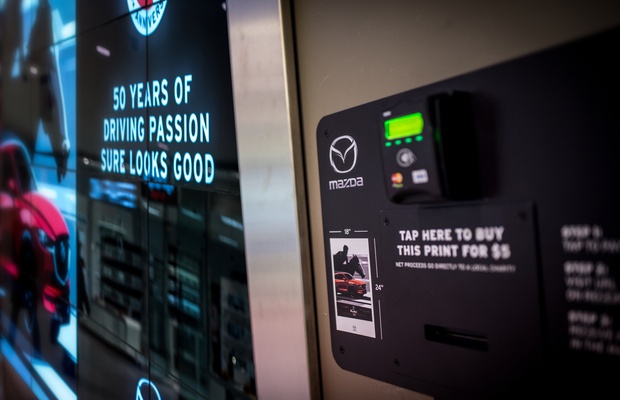 Mazda is celebrating 50 years in Canada with a series of limited edition prints available for purchase through a digital billboard in downtown Toronto. The prints were created by British automotive artist Guy Allen to showcase the brand’s philosophies and most iconic vehicles over the past half-century.

In partnership with agencies of record, J. Walter Thompson Canada and Excelerator Media, Mazda will have this innovative billboard selling prints through a tap-to-pay terminal in the busy retail concourse of the Royal Bank Plaza on Bay Street for the next four weeks, as part of a larger out-of-home campaign in-market during the same time period.

Each week will feature a new print for sale at $5.00 a piece, giving passersby an opportunity to collect all four. The first print available is of a horse and rider, representing the Japanese philosophy “Jinba Ittai” (oneness of horse and rider) which is the basis for Mazda’s engineering philosophy. The following prints feature the 1967 Mazda Cosmo, the four generations of the Mazda MX-5 Miata, and the 1991 Le Mans winning Mazda 787B. At the end of the billboard’s run, all net proceeds will be donated to a local charity of Mazda’s choosing.

Neal Bouwmeester, National Manager, Brand Communications at Mazda Canada said: “We love the idea of acting more like a clubhouse of driving enthusiasts than just another automotive company. This campaign is about celebrating 50 years of Mazda in Canada in a way fellow car lovers would appreciate.”

The unattended tap-to-pay terminal is a first for Mazda, media partner PATTISON Onestop, and Fourth Wall, PATTISON’s interactive arm that managed the production. The tap-to-pay terminal issues buyers receipts with unique codes that verify their purchases and direct them to a dedicated website where they can input mailing addresses for their prints.

“Mazda has such a rich, yet often overlooked, history in Canada and we felt it was important to share that history in a way that feels less like advertising,” noted Ari Elkouby, VP, Creative Director, J. Walter Thompson Canada. “The prints allow us to tell Mazda’s incredible brand story in a way that feels more like art, which better encapsulates the feeling of Mazda’s clubhouse philosophy.”