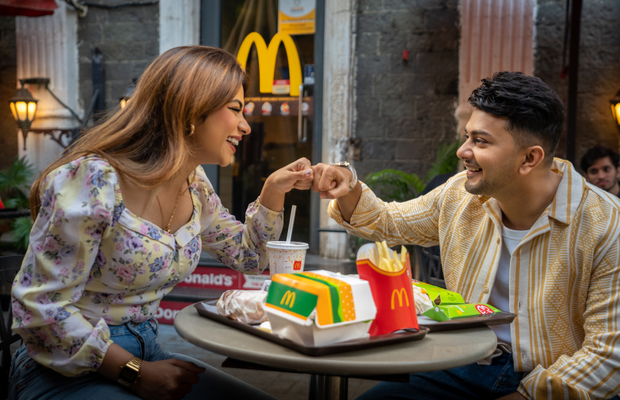 From birthday parties to first salary treats, from getting together with family and friends over meals to all occasions big or small, McDonald’s has been a part Indian customers’ lives for the last 25 years. To celebrate this important milestone, McDonald’s India - North & East has launched #25YearsOfLovinIt campaign capturing fun, light-hearted, feel-good moments that McDonald’s is known for. Featuring popular social media celebrities and real-life couple Awez Darbar and Nagma Mirajkar, #25YearsOfLovinIt is a contemporary rendition and continuation story of McDonald’s memorable ‘Hum dono boyfriend-girlfriend hai kya’ campaign which struck a chord with its awe-striking appeal.

Commenting on the campaign, Rajeev Ranjan, chief operating officer, McDonald’s India – North and East said: “We have had an amazing 25 years in the country. Bringing smiles to millions of our customers through our great tasting delicious menu offerings and providing delightful memorable experiences to our guests has been extremely satisfying. Our new campaign beautifully captures the nostalgia, the excitement, fun and the sheer joy of happy times spent by two friends meeting after 25 years at their favourite McDonald’s restaurant enjoying their favourite meal. Through the film we reinforce our promise of providing delicious feel-good moments easy for our customers, we are optimistic that our customers would relate to and love the campaign.”

Conceptualized by DDB Mudra, the film opens up with a typical moment in this social media age, when Awez (male protagonist), accidently double taps on Nagma’s (female protagonist) old profile photo, reconnecting them after many years. Are they still ‘boyfriend-girlfriend? Or just two strangers?  The new campaign brings out the moments of happiness when two friends reunite to relive their cherished memories over their favourite food at McDonald’s.

Iraj Fraz Batla, executive creative director, DDB Mudra North said: “I remember the excitement of the first ever McDonald’s opening up in India, right next to the college I ended up going to. 25 years on, I feel the same childish thrill when I’m near a McDonald’s. And as we celebrate 25 years of McDonald's in India, it’s the same thrill we capture using the characters who appeared in one of our most iconic films. While they reunite, we’re reminded how much they, McDonald's, and by extension all of us have grown over the years. After all for 25 years, McDonald's has been the place where happy memories are made."

Spreading the joy of completing 25 years, McDonald’s India- North and East has introduced its Rs. 25 Menu. Customers have the option of adding McPuff/Small Fries/Small Sundae/Small McFlurry/Medium Drink and Iced Tea to any Extra Value Meal or Large Extra Value Meal at Rs. 25.