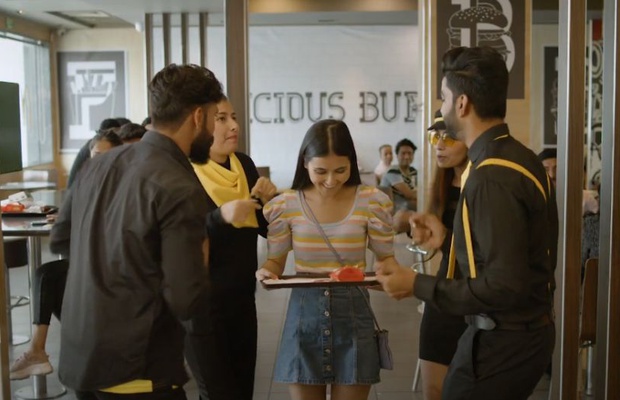 McDonald’s India – North & East has unveiled a new digital campaign titled ‘#TheRealDeal’ to promote the launch of its brand App (iOS or/and Android device). The McDonald’s mobile app provides customers with special deals & offers that can be redeemed at dine-in, takeaway or drive thru.

#TheRealDeal campaign features four digital films based on a social experiment, capturing the reactions of different customers as they find out about the McDonald’s app and their surprise while availing the amazing offers. The opening film showcases a couple walking into the restaurant and redeeming a deal on the new McDonald’s App, followed by a surprise visit by a baraat to hand them their free delight. The other films similarly capture customer's reactions who are delighted/ left-in-awe as they receive their freebies in a rather dramatic style – featuring superheroes, balloons, and an acapella group.

In addition, an explainer video is also released with the famous McDonald’s Fries explaining people about the #TheRealDeal and how to redeem the offers on the McDonald's app.

“McDonald’s app is for those who want to make the most out of their experience with the brand, be it availing exclusive offers and deals at dine-in, takeaway or drive thru or sharing feedback or learning more about the menu. The app is all about making every interaction with the customers even more convenient and delightful,” said, Rajeev Ranjan, chief operating officer, CPRL (Connaught Plaza Restaurants Pvt. Ltd. operates McDonald’s restaurants in North and East India).

Ashutosh Sawhney, managing partner – North, DDB Mudra Group said: “Based on a social experiment, this unique campaign is designed to celebrate our customers and deliver delightful and exciting experiences for them through #TheRealDeal. With aspects such as a baraat, superheroes, balloons and an acapella group joining in the celebration, we are looking forward to providing similar kind of feel-good moments to customers when they redeem deals and offers on the new McDonald’s app.”