From FCB/SIX comes ‘me too.’ Act Too - a first-of-its-kind platform converting awareness into action that is permanently blockchain-protected 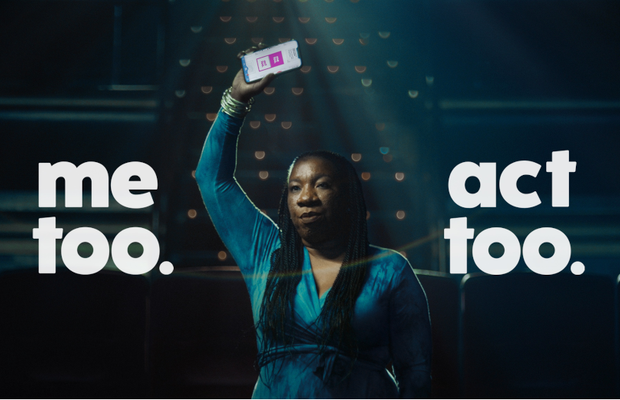 On 15th October 2017, two words thrust into the public consciousness and ignited a global movement: #MeToo. Three years later, FCB Global helps ‘me too.’ movement founder and activist, Tarana Burke, launch the next chapter of her organisation’s evolution. Brought to life by FCB’s creative data marketing agency, FCB/SIX, ‘me too.’ Act Too is a breakthrough platform and brand campaign that engages the world to take part in ending sexual violence.
On this three-year anniversary of the day the hashtag #MeToo went viral, FCB/SIX introduces ‘me too.’ Act Too, an interactive website and crowdsourced, blockchain-powered tool that encourages people to take action. It’s part of the nonprofit organisation’s mission to demonstrate that it’s more than just a hashtag by showing not only survivors but also advocates and allies alike how they can take tangible actions to join the fight against sexual violence.
“FCB Global has been moved by recent events to apply our industry leadership position to catalyse social change,” said Carter Murray, FCB Worldwide CEO. “Fresh off FCB/SIX’s award-winning ‘Go Back To Africa’ campaign, we set out on a bold, new social justice mission: to help the ‘me too.’ Movement define the next chapter of its evolution. It’s been a personal honour to work with Tarana and her inspiring team through our two-year journey and to continue the legacy of their incredibly important work. There’s still a tremendous amount of change needed to win the fight against sexual harassment and assault, but we’re emboldened by the progress made and optimistic for lasting impact ahead.”
From Awareness to Action
‘me too.’ research found that the original hashtag movement in 2017 was effective in waking the world up to the prevalence of sexual violence and giving survivors a powerful voice. However, unlike causes such as climate change or Black Lives Matter, it was less clear where allies fit in or the ways in which they can help. A second challenge was that the success of #MeToo had reduced the movement to a hashtag in certain people’s minds. Working with FCB/SIX, Tarana’s team envisioned its next chapter to be about inciting action — such as changes to laws and policies — and increasing the accessibility of the movement so it had an equally important role for advocates and allies, as well as survivors.
To counteract the historic silencing of survivors’ voices, the work involved a novel application of blockchain technology, so that each user’s contribution to the movement is recorded permanently in a public ledger that can’t be silenced, altered or erased.
“Awareness is nothing without action and that’s what we wanted to convey in our next act,” said Tarana. “Today, we all have the chance to write another chapter, and to contribute to everyday activism as simple as joining a march or reading a book. Working with FCB/SIX opened my eyes to the possibilities of applying innovative technologies in service of a future free from sexual violence. Through ‘me too.’ Act Too, the history of this movement will be written by the activists themselves, and recorded for posterity to a permanent archive on a public blockchain so that their voices can never be altered, disputed or erased.” 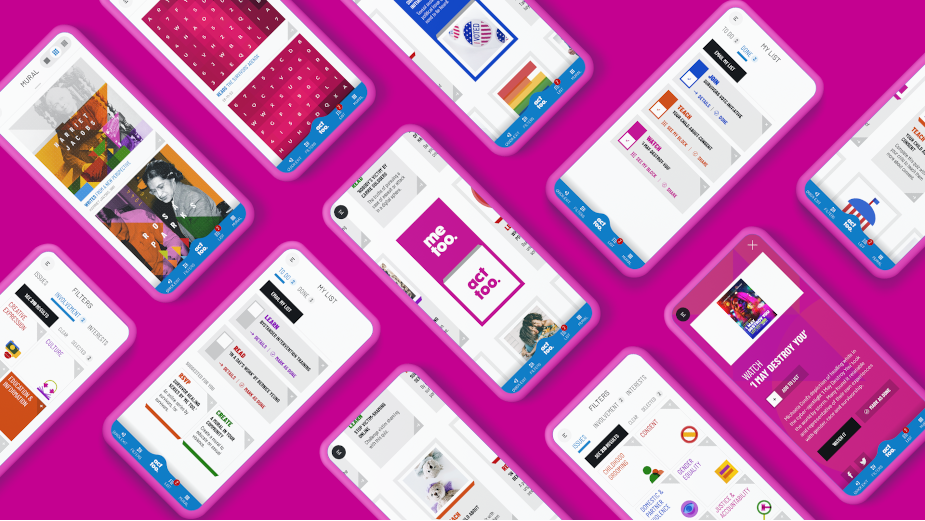 Powered by Everyday Activism
The ‘me too.’ organisation worked with the creative data specialists at FCB/SIX to concept, create and build the technology platform and supporting brand campaign. Central to ‘me too.’ Act Too is an 'action hub', an interactive platform featuring:
- Nearly 1,000 Actions: Powered by a recommendation engine modelled after best-in-class e-commerce sites, the utility uses intelligence to recommend personalised actions people can take to support the movement. From micro-actions (like watching an educational video) to formal actions (like donating or volunteering), the platform curates suggestions based on each individual’s interests, level of commitment, location and more.
- To-Do List: Users can create their own personalised plan, saving meaningful actions and crossing them off as they go.
- Blockchain Record: When a user completes an action, they are given a unique block that gets added to the blockchain-powered indelible record, a new way to write history.
- Monument to the Movement: For every action taken, a 64-character block image becomes one piece that is stitched together into a larger blockchain visualisation, a digital tapestry celebrating iconic forebears, from Harriet Jacobs to Rosa Parks, in the fight against sexual violence. 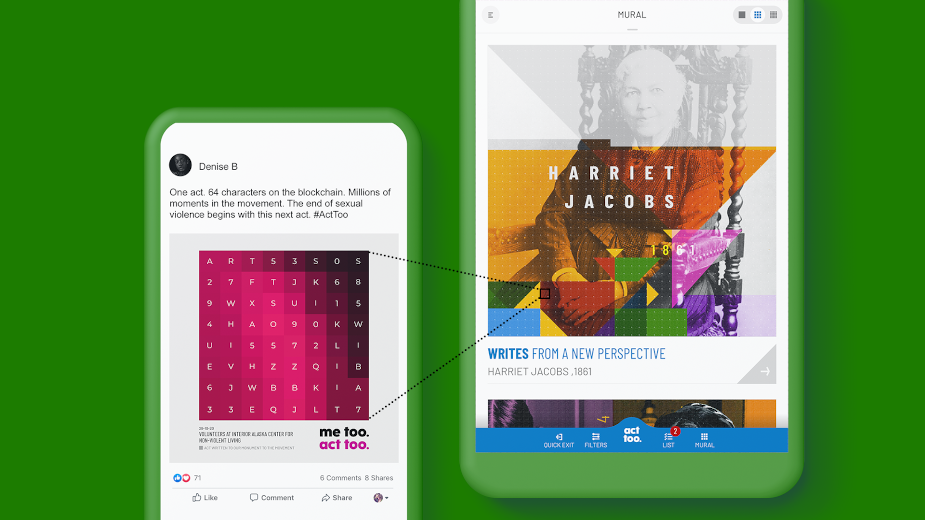 Recorded in a Public Ledger
Too often, people in power write the narrative, while marginalised voices get silenced or disputed. The FCB/SIX team wanted to change the narrative by shifting focus on to the survivors. The platform is powered by blockchain technology, a decentralised peer-to-peer ledger of transactions often used in handling financial transactions that records an indelible public record.
FCB/SIX global president Andrea Cook explains the concept: “We like the poetry of when you take action, you help bring each of those moments to life and you become part of the movement’s history. Through a novel application of blockchain for activism, FCB/SIX wanted to create a living, irrefutable record of the survivors and allies that can never be erased. Everything about this innovative technology — its openness, peer-to-peer approach and transparency — seemed perfectly suited to our goal. Leveraging FCB/SIX’s position at the forefront of technology, data and creative, we created a breakthrough digital platform for civic engagement. We see this as the face of a New Activism.” 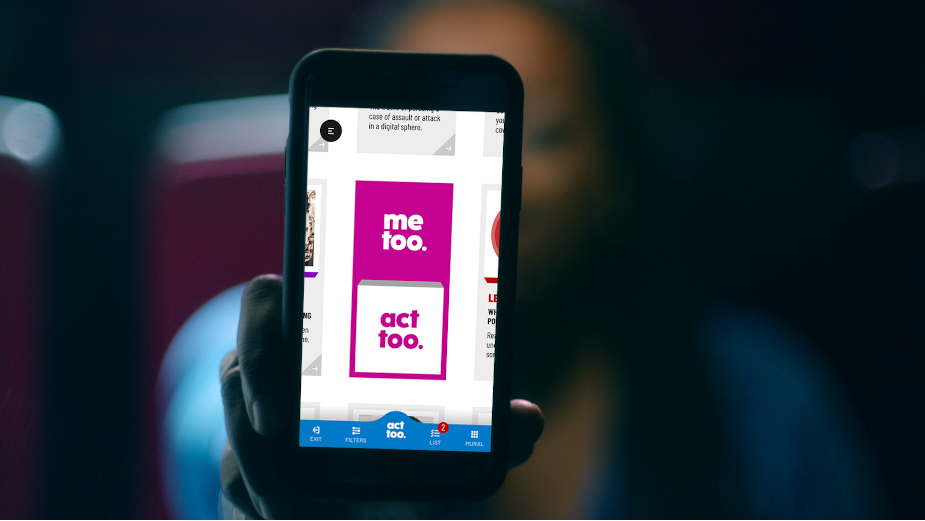 Advocacy Through Amplification
The ‘me too.’ Act Too platform will be supported by a cross-media campaign from FCB/SIX that reaches survivors, advocates and allies alike. Its unique digital mural will be shareable on Instagram and other social media and brought to life in outdoor activations. For example, today, a digital billboard in Times Square and other prominent locations will promote the new platform. Celebrities and influencers will further amplify the campaign on their social feeds. Through a brand partnership program, launch sponsors such as Levi Strauss & Co. can champion an action that resonates with their organisations. For the 360° campaign, FCB/SIX relied on help and support from several IPG sister companies across its network, including Acxiom, Current Global, IPG Mediabrands, ITB Worldwide and UM’s J3.
Statistics show that one in four women and one in six men will experience sexual violence in their lifetime, and rates of sexual violence typically rise during states of emergency. The National Alliance to End Sexual Violence has seen that close to 40% of rape crisis centres surveyed noted an increased demand for services in the initial months following the Covid-19 outbreak.
Starting today, users can click here to find ways to get involved and support the movement to stop sexual violence. Interested brand sponsors should contact Dani Ayers here.