Banjoman's head of production on stepping up for bigger jobs, what is takes to be a good producer and the satisfaction in well laid plans coming together 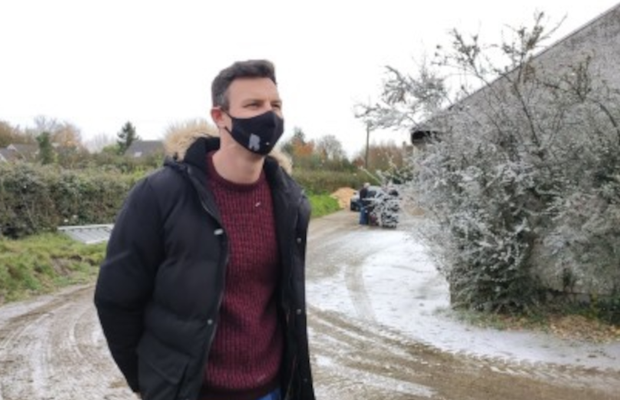 Matt D’Arcy is an award winning producer and partner at Dublins Banjoman. As head of production, Matt represents seven directors to produce advertising, film, TV and other media. A former professional rugby player with Munster Rugby, Matts MO is to create a warm, collaborative, team like atmosphere across all parts of the process, from pitch to delivery.

Matt> I worked in an advertising agency before making the switch to Banjoman years ago so I wasn’t a million miles away from production. I am a people person and relationships are at the heart of producing so that attracted me to it - I also enjoy the satisfaction of a well laid plan coming to life.

Matt> I have worked with Banjoman from day one, in the early days I would do everything on a production from making coffees to all of the EP / managerial stuff. I learned to appreciate every role on a production and the importance of creating the right atmosphere on set - we are all about having a good time while making the best work possible.

Matt> It was very much a sink or swim situation, learn on every job and get better with each production. I surrounded myself with experienced HODs and wasn’t afraid to ask for advice, I probably took “there are no silly questions” to the extreme! Researching and building relationships also helped me to learn the ropes.

Matt> I produced a Nissan commercial with In the Company of Huskies creative agency which was really challenging and a little daunting at the time, it was a bigger scale production than we had done before and a huge brand so the pressure was on. Thankfully it went really well and the commercial ended up winning a few awards including a Grand Prix so we must have done a few things right! That production gave me the little lift in confidence and belief I needed to step up for bigger jobs to come.

Matt> I would tend to agree, I think the skillset for producing applies to most productions/events. Although each can be very different, I think the basics of producing remain the same. A good producer would play to their strengths for any event, film or commercial and also surround themselves with the right people most suited to the type of project.

Matt> I love being on set (especially after a couple of hours when a shoot is up and running smoothly). It is great to see everything come together, to have everyone together enjoying themselves and creating something great. The sense of anticipation and excitement trying something new or different on set is brilliant.

Matt> From a personal perspective the productions have gotten a lot bigger, more interesting and challenging. I’m not sure the industry has changed too much since I’ve started apart from the recent Covid implications with remote working/shooting.

Matt> Relationship management is key, it’s so important to meet new people in the industry and to continue building on existing relationships. Making sure you create the best atmosphere for everyone to work to the best of their ability. I think the best producers are a certain type of person, having said that there are lots of different styles of producing so certain aspects of producing can be learned. Maybe the most important parts are innate though?

Matt> ‘Belong Together’ for Brown Thomas always stands out in my mind. The production was so enjoyable and challenging throughout. We had a great team from client, to cast and crew, it really felt like one big collaboration. The shoot itself was really enjoyable, we shot in some amazing locations around Ireland, including in an underwater tank. Doing our post over in New York with Blacksmith was the cherry on top.

Matt> This is tricky to narrow down because we have had a lot of interesting projects recently, Brown Thomas, RTE Toy Show and Three mobile were all great to work on. Our project with renowned Irish jewellers Weir and Sons presented a unique challenge, the script had an A and B plot - one was set in the 1860’s and the other in present day. Recreating the 1860’s was a fun challenge.

Matt> What goes on tour stays on tour!

Matt> My ambition is to continue creating enjoyable and inclusive film sets - the better the atmosphere on set the better the work will be. I definitely want to keep challenging myself to produce the best work possible while also helping our directors with whatever film goals they may have be they commercial or drama.

LBB> As a producer your brain must have a never ending "to do" list. How do you switch off? What do you do to relax?

Matt> Yes it certainly does - I have a weirdly OCD notebook with endless completed ‘to do’ lists to prove it!! Sport is definitely my go to, I play a lot of rugby and golf. Training for rugby is pretty intense which is great because I can take my mind off work for a couple of nights a week. I also love to travel and socialise, I find having those little breaks are key to not burning out.

Matt> I think its the challenge of something that drives me along, a different technique or trying something new keeps things fresh and enjoyable. Getting good feedback from people both within the industry and those outside of it who notice the work is always a nice fuel to keep getting better.

Matt> Just get started! If you are passionate about something there is usually a way to make it happen - focus on making great work above all else and use that work to keep getting bigger and better scripts. Get to know people in different departments and surround yourself with the most talented people possible.

Matt> I think being yourself and not treating it like a ‘production-client’ relationship is hugely important, obviously the work has to done to a high standard to create trust and confidence but making it a friendly and fun relationship is key - don’t be afraid to have a bit of craic. It should be a collaboration with everyone pulling in the same direction.

LBB> Producers are naturally hands on - they have to be. How do you balance that in the more managerial role of an EP?

Matt> Naturally the busier you get the less ‘hands on’ you become, having trust in your production team and HODs is very important to finding a balance. I am a bit of a control freak but spreading the workload around often leads to better work so I have learned to let other people do their thing - having a well organised workflow and defined roles really helps this.