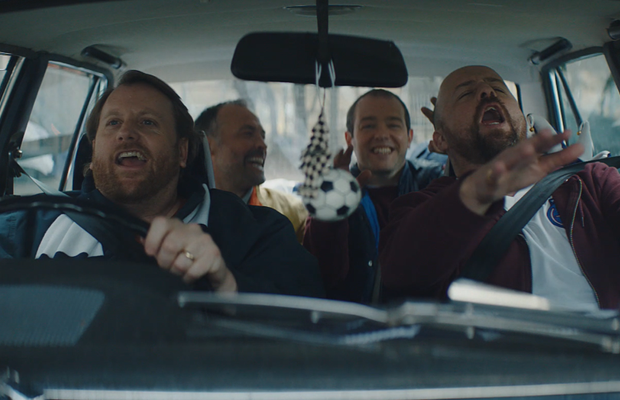 This TVC for William Hill directed by Michel + Nico, produced by Merman London is a fitting celebration of sport and the grand return we have all been waiting for. It celebrates the close bonds of friends and the shared passion they have for sport and gaming. It also recognises the return of people being able to share moments in an authentic and relatable way.

The advert features a music track that transcends generations, nationalities and sport, the Neil Diamond written and composed ‘Sweet Caroline’.

“We were delighted with the passion and drive that Nico and Michel brought to the project. The fact they played rugby professionally gave them a unique understanding of the passion of sport. I am thrilled with the results. They nailed the brief,” said Charlotte Emery, chief brand officer at William Hill.

Directors Michel + Nico commented: "When we first received the script it was kind of lovely to read something with so many people in it, in seemingly normal circumstances. And it’s refreshing it is to see a sports ad that focuses on the people that matter here, the fans. After all what is sport without the fans.

"The ambition then was to look forwards rather than back, creating some excitement and some anticipation about what’s to come in the months ahead rather than being reminded of the situation we’ve found ourselves in these past 12+ months.

"More than anything the situation we have faced over the past 12 + months has brought into sharp focus what sport means to us all. For many it is more than just sport, the match day experience a pilgrimage, an opportunity to congregate, to sing together and to praise the teams and individuals we so readily adore.

"It’s more than just watching or being a part of a group of men / women running around. It brings light relief to our daily routine, bookends our working week, bringing structure to our calendar as the weekend really is the weekend. It’s the conversations surrounding the game, before and after; it’s the journey we take, it’s the match day rituals we follow, it’s the superstitions we’re tied to during the highs and lows of a game and it’s the opportunity to share those moments with the friends and family we’ve so dearly missed.

"How we’ve all longed for a return to sport and the opportunity to once again savour the match day experience whether that’s at home, in a bar / pub or on the terraces. "

With a cast totalling more than 500 people, featuring Rio Ferdinand, Jermain Jenas, Robbie Savage and Sir A P McCoy this was shot in 16 locations in and around London during April 2021.

Launched during the Champions League Final it will be running on TV and various media channels throughout Europe.