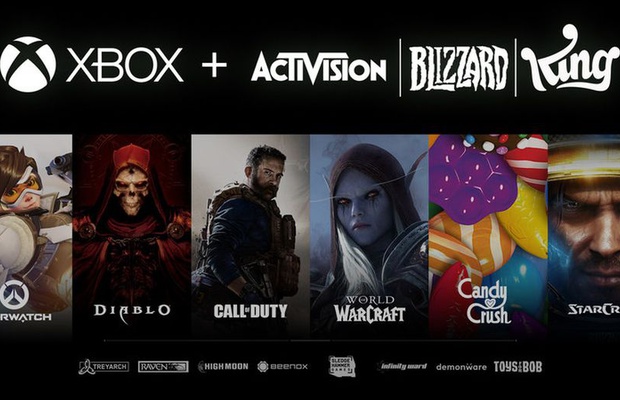 In a transaction valued at $68.7 billion, Microsoft has completed the acquisition of American video game holding company Activision Blizzard, now adding more of the most popular video game franchises under their umbrella. Microsoft, alongside its existing renowned gaming properties like Halo, Minecraft and the Xbox console, now owns an increasingly impressive collection of Activision Blizzard franchises, including Call of Duty, Warcraft and Overwatch, to name a few.

In a statement announcing the acquisition, Satya Nadella, chairman and CEO of Microsoft said: “Gaming is the most dynamic and exciting category in entertainment across all platforms today and will play a key role in the development of metaverse platforms. We’re investing deeply in world-class content, community and the cloud to usher in a new era of gaming that puts players and creators first and makes gaming safe, inclusive and accessible to all.”

Microsoft now has even more industry-leading games to fortify its ‘Game Pass’ selection, as well as hugely valuable opportunities in the world of mobile gaming, as King studios (famed creators of Candy Crush) were the mobile gaming development and distribution arm of Activision Blizzard, and therefore also acquired by Microsoft.

But what does something of this magnitude in the realm of gaming mean for the advertising industry? According to Accenture, gaming is the fastest growing form of entertainment, now worth an estimated $300 billion and it goes without saying that large entertainment sectors provide bountiful commercial opportunities for brands and advertisers alike. Microsoft itself claims that three billion people play video games every single day, with that only set to rise in the coming years. Having a larger share of this audience with more products to advertise inevitably means that the advertising industry - which itself has a growing interest in gaming - will feel the ripples of this acquisition in one way or another.

Neil Hopkins, global head of strategy at M&C Saatchi Sport & Entertainment says that, whilst there is an obvious attraction for Microsoft to oversee development of even more established, successful Activision Blizzard franchises, there are still questions to be asked and success is not guaranteed from a marketing standpoint: “A key question will be whether those franchises can flourish, and the next generation of games be nurtured under the control of a far larger corporate entity.” Neil continues, “Beyond the commercial and partnership possibilities the deal will offer, marketers might also be reassured that, from a reputational point of view, managing the ongoing fallout of the sexual harassment scandal which has engulfed Activision Blizzard will be a priority for its new owners.”

One optimistic advertising voice following the news of the acquisition is NERD Productions, who have previously worked on a fan-favourite Blizzard franchise, namely producing artwork for the Diablo II remaster campaign. They believe that, not only will marketers benefit from and enjoy talking about the acquisition, but there will also be tangible working opportunities and benefits to follow. This includes ‘brand safety’, ‘increased credibility’, ‘better offers’ and ‘bigger audiences’ for marketers that get to work with these Activision Blizzard IPs: “Larger audiences usually mean larger budgets, what’s not to like?”

The NERD team also highlights the collaborative benefits that the Activision and Microsoft advertising teams - and any creatives involved in marketing any of their many products and brands - will have access to, following from the acquisition: “Activision will also get access to Microsoft's portfolio of advertising tools and a great marketing team to work with. For instance, Microsoft's benefit comes from Sony having a marketing deal with Activision that Microsoft had previously lost and it is still likely to keep Sony at the forefront of gaming.”

A challenge for marketers in the gaming industry has historically been the siloed and often-times exclusive nature of the gaming world - your audience is split across different consoles, platforms and tribal fandoms that are often separated by exclusivity deals or even a high cost to enter from the start. With Microsoft acquiring more studios and IPs - especially in the mobile gaming market - Casey Campbell, North American managing director for video game publisher Gameloft, says that this ‘strategic deal’ is all about bringing Microsoft and their brand partners closer to every player, regardless of where or what they play.

Casey says: “It’s become so important to make the most of your IPs across all digital platforms, and Microsoft’s said their approach to the metaverse will be cross-platform and built around key franchises. Well, they just bought some of the biggest! Gaming is such an engaging and interactive experience, compared to just passively watching some video creative. Brands need to be planning how they’ll take part in the digital playgrounds built to feature these big gaming IPs.”

Contrastingly, there is the viewpoint that the acquisition in itself may have very little impact on marketers, especially as this isn’t the first large-scale gaming acquisition to happen - it’s just “another blip in a long line of gaming acquisitions,” according to Gavin Cheng, CEO at DDB FTW Worldwide. He believes that that the industry has always been plentiful with creativity, remaining unaltered by this recent development.

However, he says that the acquisition is part of a more general evolution of the gaming industry, which is now developing into a sector with many more opportunities for marketers than ever before: “The big change recently is that gaming, which was an oddity in the eyes of most brands, has been rebranded as the Metaverse and thanks to Facebook's pivot, everyone is motivated to make sense of it all. What is happening, on a large scale, is that the next face of the internet is emerging. So if you're in the business of communication, this metaverse gaming thing is worth a look.”

These industry experts seem to agree on one thing - marketing and advertising in gaming is only going to get bigger. Microsoft’s acquisition of Activision Blizzard does provide immediate opportunities for the marketing of a number of huge titles now under the Microsoft umbrella, but there appears to be an agreement that this is merely a symbol of something bigger. As Casey Campbell says, this acquisition “does a lot to position Microsoft for the evolution of entertainment.” They are collecting a library of IPs and resources that will allow them to engage with a larger audience and connect that audience to their brand partners in the future.

This is especially prescient as the gaming industry is evolving into a new era of commercial opportunity, exceeding that of merely a source of entertainment, brought on by the rise of the metaverse and mobile gaming.This evolution will provide no shortage of opportunities, especially for Microsoft and Xbox, who many consider to have recognised the creative potential that lies in the further development of AI, VR and cloud-based gaming.

M&C Saatchi Sport & Entertainment’s Neil Hopkins says that, as far as marketers are concerned, the fact that Microsoft’s competitor Sony saw their share price fall by $20billion after the acquisition news ‘underlines the extent to which Microsoft will be able to expand its entire gaming ecosystem’. He says: “Its reach could grow from mere millions to billions of gamers and create the type of valuable, engaged and connected audience marketers crave access to.”

Is Purpose a ‘Hero Trap’?

The Power Of Immersive To Transform Your Marketing