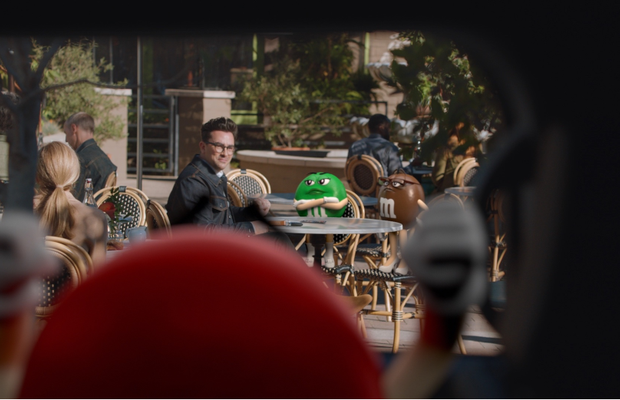 Today, M&M’S brand unveiled its new Super Bowl LV ad in advance of its scheduled broadcast during the first quarter of this Sunday’s Big Game. The new commercial features Emmy award-winning actor Dan Levy, as well as three of the brand’s iconic spokescandies – Ms. Green, Ms. Brown and Red – and highlights how fun, humour and a few M&M’S have the power to help bring us closer together. Fans can view the spot on YouTube and on its website.
Titled 'Come Together', the spot features a variety of relatable 'wow, I really shouldn’t have done that' scenarios and the people in them choosing to make it better with a bag of M&M’S. Like the person who kicked your airplane seat when you tried to recline, or the friends who botched their gender reveal party, or even the guy who can’t stop mansplaining, no matter how hard he tries. The new ad was created by BBDO New York.
“I always try to take part in well-intentioned campaigns with brands that align with my sense of humour, so this ad was a perfect fit,” said Dan of his appearance in the spot. “One of the things I loved most about this campaign was the message about how something small – like sharing M&M’S - can help bring people together.”
The ad, which was unveiled virtually in a live event via OnZoom earlier today, marks the first time Dan Levy has appeared in a Super Bowl commercial. Fans who missed the virtual unveil will be able to watch a replay of the premiere event this Friday on M&M’S social channels.
“M&M’S is a fun and colourful brand – so tapping into that humour to help us laugh and feel more connected to each other felt very right this year,” said Sarah Long, chief marketing officer, Mars Wrigley North America. “Of course, having Dan bring his incredible talent and comedic wit only makes the story stronger. The new commercial is a great extension of our Mars Wrigley’s purpose to create better moments that make the world smile.”
The full 30-second spot will air during the first commercial break following the kickoff of Super Bowl LV, which will be broadcast on CBS on Sunday 7th February 2021. This will be M&M’S sixth Super Bowl ad in the past decade.
For more information, visit M&M’S on Facebook, Twitter, Instagram or at the website.