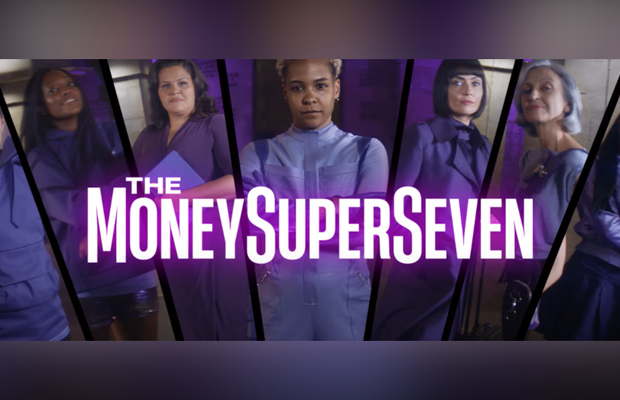 MoneySuperMarket is re-launching its brand with a new positioning that highlights the breadth of savings that customers can make on their household bills and the benefits of saving on multiple products. With over 50 ways to save money, from banking to energy and insurance on its price comparison service, MoneySuperMarket’s new strategy reminds Britain that there’s always more ways to save.

The new direction, which accompanies a complete refresh of the brand (including a new logo and brand identity) launches with an all-new advertising campaign, introducing us to The MoneySuperSeven.

The MoneySuperSeven are a squad of money saving specialists who work out of secret headquarters at MoneySuperMarket, dedicated to the mission of saving Britain money. Each one an expert in their individual saving areas of Car Insurance, Energy, Home Insurance, Broadband, Travel Insurance, Credit Cards and Pet Insurance.

The new ad, directed by MJ Delaney through Merman Films, introduces us to the squad, their HQ, and their mysterious ‘Boss’; who has set two of the seven – ‘‘Wheels’ and ‘Spark’ - out on a daring, high-octane mission to save a customer money on the insurance and energy bills for his new electric car.

The integrated campaign launches on Friday 3rd September with a 60” and 30” TVC advert, supported by OOH, VOD, Radio and Social. It is the brands’ first work with New Commercial Arts since their appointment in March, the agency set up by James Murphy, David Golding, Ian Heartfield and Rob Curran. As well as brand communications, the agency is also retained for Customer Experience with MoneySuperMarket, with a variety of workstreams in progress for the brand.

Mel Stonier, head of brand and communications at MoneySuperMarket, comments: “We were looking for a creative idea that really demonstrates our range of products and the many ways in which people can switch and save money with MoneySuperMarket. The MoneySuperSeven captures this in a fun, exciting and memorable way.

“We know people tend to shop around to compare products when their car or home insurance is up for renewal - typically around once or twice a year, but people are missing out on hundreds of pounds in further savings by not spending a little more time reviewing their other household bills in the same way.

“There are always more ways to save with MoneySuperMarket, and this is at the heart of the new campaign. The more products our customers switch, the more they will save, and we’re on a mission to save Britain money so they can keep more of their hard-earned cash!”

Ian Heartfield, creative founder at New Commercial Arts adds: “There's more than one way to save cash with MSM, in fact there are at least seven.  Hence the MoneySuperSeven.  Each one a ninja at saving money in their area of expertise.  It's a tongue in cheek Bond/Mission Impossible/Ghostbusters mash up.  Energetic, fun, loud, and unapologetically direct with its message to tell Britain they can save more money on more things."