Wunderman Thompson, In & Out Productions and Tim Kendall tell a missed train story like you’ve never seen before 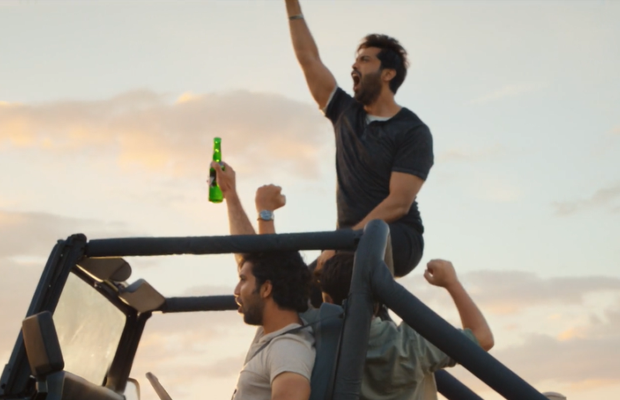 If you’ve ever missed a train, your likely response is probably to sigh, and simply wait for the next one. Mountain Dew’s latest ad, however, proves that there’s a much more exciting option. Creatively devised by Wunderman Thompson and produced by In & Out Productions, the spot follows a trio of friends who embark on a high-octane car chase to connect one man and his missed train.
Directed by Tim Kendall, the action-packed spot stars actors Fahad Mustafa, Ahad Raza Mir, and Aryaan Arora as the three men who bundle into their Jeep, grab a handful of Mountain Dews, and set out on an epic journey reflective of a Hollywood blockbuster. After crashing through construction work and encountering adorable wildlife, the trio are able to use a conveniently-placed ramp to dramatically launch the car into the air, placing them on top of the fast-moving train.
Tim Kendall was approached by Wunderman Thompson early on in the creative process, helping to decide upon the best concept to reflect Mountain Dew’s evolving messaging. Moving beyond the notion of a single hero assisted by a can of Mountain Dew, the team landed on the idea of a group of friends working together to catch a train. Particularly focused on how friends experience an adventure together, Tim worked to give each individual a unique character, ensuring they all contributed something different to the dynamic of the group. He also looked at capturing the struggle they face when working together as a team, suggesting that whilst they may be somewhat at odds, it’s the experience that brings them together.
Despite moments of exaggeration in the spot, Tim approached the action from a human perspective. Setting rules on how to film each scene - such as the camera being unable to go anywhere a normal human cannot - he presented the fantastical elements from a realistic point of view, allowing the audience to connect with the spot on a deeper level.
The team also attempted to shoot as much as possible practically, occasionally combining this footage with CG support. Considering the risks of shooting such ambitious stunts with moving vehicles, the team supplemented practical car action and set pieces with CG trains, working with post production studio UPP to ensure all elements looked photorealistic. For the practical effects, the team also towed the Jeep on a process trailer whilst shaking the cameras to create a sense of speed and intensity.
Behind the scenes on the action-packed spot
Director Tim Kendall comments: “These types of stories are best told with different levels of energy. We wanted to make a multi-faceted adventure that has energy peaks and valleys throughout. I truly believe you can only make the loudest noise by having silence just before it, so each moment we tried to challenge the energy with what can happen next. I always want to be ahead of the audience, giving them a sense of discovery and surprise throughout. Sometimes with testosterone-fuelled action, it’s easy to forget that these heroes are humans too. I thought that a brief moment of pause for a crossing family of ducks could give the characters some heart.”
As the team were dealing with international celebrities capable of speaking multiple languages, they were able to shoot each line in a variety of languages with almost undetectable accents. Remaining culturally aware of the different slang from each country, Tim would suggest random things for the characters to say to each other whilst the actors were delivering lines - encouraging them to elevate their interactions throughout.
Tim Kendall adds: “Extreme challenges come with making extreme stories. It took consistent optimism and positive energy to overcome each obstacle. I’ve created an alternate persona called ‘The Good Mood Dude’ who’s helped me out in many facets of my production life. Special thanks to DP Sam Chase - anyone who’s ever worked on a Mountain Dew commercial knows the drinking shot is very important, and he did a great job creating movement with light whilst the car and cameras are stationary. EPs Frida Sellar and Julia Dangond also did a spectacular job holding it all together. In the end, we successfully made Pakistan out of central Florida.”
The spot will air in Pakistan, Middle East, South East Asia, and Europe.

Production Company: In & Out Productions

More from In & Out Productions

Daniel Azancot: “Creativity Is the Art of the Unexpected”

“The Crazier, The Better!”: In & Out Productions Is Bringing the Impossible to Life