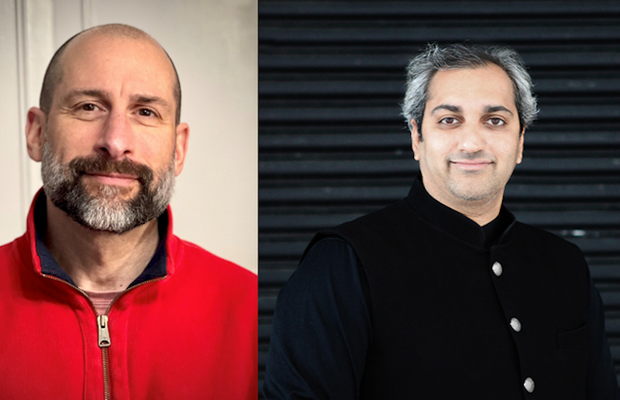 - Above: Left - Stewart Krull // Right - Harsh Kapadia
MRM, a leading marketing agency that is part of McCann Worldgroup, today announced it has named Harsh Kapadia EVP, chief creative officer for MRM New York and Princeton. Harsh moves to MRM from his role as executive creative director (ECD) at VMLY&R New York and previously at Wunderman Thompson (JWT). In addition, Stewart Krull has been named ECD, MRM Princeton, and will report to Harsh.
Ronald Ng, global chief creative officer, MRM, said: “Harsh is a world-class talent with a passion for harnessing technology and innovation to help businesses make a difference in people’s lives. Not too many creatives get letters of recognition from Michelle Obama, and Harsh’s consistent streak of great work across markets like India, Australia, the UK and U.S. makes him a unique talent for clients.”
Ronald was referencing Harsh’s work for Drink Up, Harsh’s award-generating campaign to convince Americans to drink more water as part of a healthier lifestyle. Harsh joined VML New York in 2012, and within two years was instrumental in the agency storming the stage at the Cannes Lions International Festival of Creativity to bring home multiple Cannes Lions. He also worked on and helped win several pitches for the agency, including New Balance, LEGOLAND, Walgreens, Baileys and the United Nations. Harsh was promoted rapidly at VML, and served the agency in creative leadership roles in New York and London.
Harsh’s career began as an art director at JWT Mumbai, followed by a move to JWT Melbourne, where he began to work on global brands and helping to bring in new business. His pitch-winning and award-winning work in Melbourne led Harsh to a larger role at JWT New York, working on larger consumer brands such as Kleenex, Smirnoff, Rolex and Nestlé. Additionally, through his career, Harsh has served on the juries of Cannes Lions Mobile, D&AD Impact, ADC Awards and New York Festivals.
In interviews, Harsh always mentions that he fell in love with advertising at the age of five. Since then, he continues to go by the philosophy that the mix of cultures and curiosity to learn more always leads to great ideas – and that a big idea can make far more than a great ad or an experience.
"It has been an amazing journey at VMLY&R,” said Harsh. “Now, I’m thrilled to join MRM at a time when the industry is going through a real shift. The pandemic has fast tracked the importance for brands to create a more meaningful relationships and experiences. MRM's philosophy to do that really excites me. I’m looking forward to partnering with the team to bring a vision and magic to brands across the MRM network."
Stewart joins MRM Princeton after launching Let’s Make Stuff LLC, a creative marketing services consultancy based in New Jersey. He previously served as ECD for Atmosphere BBDO New York for 13 years, guiding initiatives spanning brand to demand to service design for Citi, Emirates, Hewlett-Packard, Visa and other global brands. Prior to Atmosphere, Stewart held leadership roles at Ogilvy New York and DDB New York, and has received recognition from every major awards show, most recently the New York Festivals and International ECHO Awards.
“A design-thinking enthusiast, Stewart brings an audience-centric approach to the table, along with three decades of expertise across virtually every product category and advertising channel. His digital-first method of problem solving is second to none and we can’t wait to write the next chapter of creative excellence for our Princeton office.” concluded Ronald.