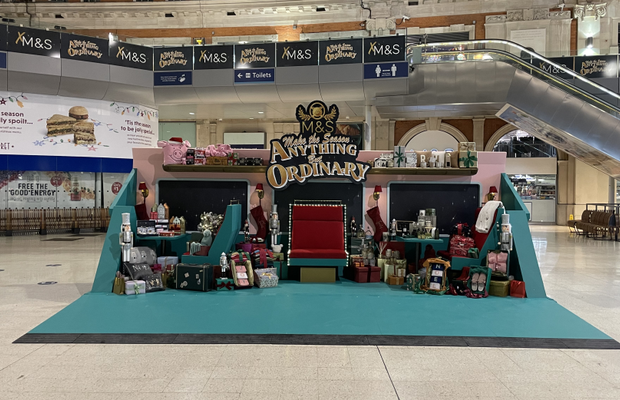 ODD created the all-singing and dancing Christmas TV ad for Marks & Spencer Clothing & Home which premiered last week with a film showing a woman’s joyous daydream of a Christmas season like no other.

Shot by Autumn de Wilde and starring Madisyn Ritland, the TV ad brings to life a whimsical musical world with the star of the ad dancing through the iconic moments of Christmas – from drinks with friends to getting the train home for Christmas to chilling in family PJs. Over the next two weeks, that whimsical world is being bought to life for over 4 million consumers with a beautiful recreation of the commercial in one of the UK’s busiest train stations – London Waterloo.

For the Waterloo Station takeover, ODD has taken elements of the TV campaign to create motion graphics which are shown on the station’s main concourse and a series of digital executions showcased across the station’s digital advertising sites, along with some striking print placements. In a piece of live branded theatre, the gifting train prop from the ad’s original set has been repurposed for Waterloo station to allow people to physically interact with the magical Christmas dream world from the film.

Using a visual language inspired by classic Hollywood musical film posters allowed the creation of an immersive experience at the station. Live experiences such as these are why the campaign focuses so strongly on the striking aesthetics and overall mood, allowing the ad to carry the impact even with the sound turned off. Customers will be invited to come up and immerse themselves in the M&S world through product interaction and a chance to win an M&S Christmas worth £3000.

In addition to unmissable advertising across a range of formats, the colourful train in the TV ad has also been recreated within the station and decked out with the very best of M&S gifting. All the gifts have QR codes attached so passers-by can scan to order on M&S.com. Items can be ordered for home delivery or to click & collect at over 700 locations – including M&S’s store in Waterloo station.

Anna Braithwaite, M&S Clothing & Home marketing director said: “Our Anything but Ordinary campaign celebrates the joy of the season and by bringing it to life in Waterloo we want to make the morning commute anything but ordinary – as well as bring some magic to those coming into London for festive fun.”

Nick Stickland, executive creative director at ODD, said: “This personifies Christmas, with a healthy dose of visual and audio festivity. This is a season of style brought to you by M&S.”