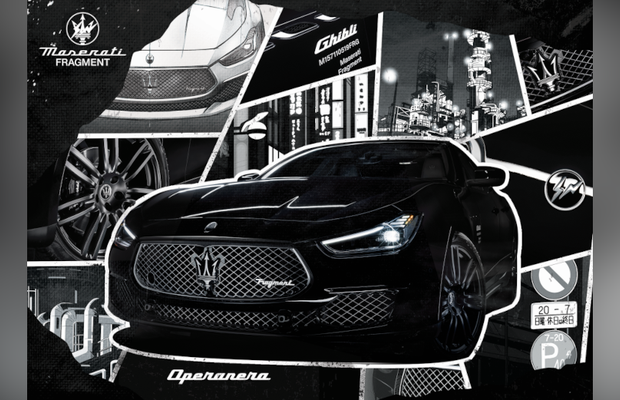 MullenLowe Singapore has created an immersive 360degree campaign to celebrate the launch of ‘Maserati Ghibli Operanera’, a creative collaboration between the iconic Italian automotive brand and Hiroshi Fujiwara, the founder of Fragment Design and a pivotal figure in shaping streetwear culture. This is the first time Fujiwara has collaborated creatively in the automotive industry, interpreting Maserati’s iconic Trident brand through a street culture lens.

To launch the collaboration, MullenLowe Singapore looked to break the rules of traditional automotive marketing, treating it more like a work of art or fashion design. Following a global pitch, the team developed a global campaign that takes inspiration from street art and Anime and uses the streets of Tokyo as a canvas and backdrop for much of the promotional activities and creative work.

The limited-edition Maserati Ghibli Operanera was revealed on the streets of Tokyo on 24th June, alongside an experiential pop-up store on Cat Street, the core of Japan’s Harajuku district and one of Tokyo’s most hyped-up locations. To bring content closer to street culture, the agency also co-created an Anime content piece with Fujiwara for amplification across social channels. The 360degree campaign includes not only digital media, POS, traditional advertising and PR amplification but also gifting and working with key cultural influencers and street artists – all focused on attracting attention of the target Millennial and Gen Z audiences.

Commenting on the campaign, Paolo Tubito, CMO Maserati SpA said: “The purpose of the campaign was to launch the car and the capsule collection born from the unexpected collaboration between the Godfather of streetwear Hiroshi Fujiwara and the iconic Maserati brand. We have been teasing on social media for six months and found the most unconventional location to place a car in the heart of Harajuku fashion district in Tokyo. The result is another One of Its Kind Maserati Meets Fragment launch with very positive results in the media and in terms of sales, reaching out to a new audience for Maserati.”

Daniel Kee, executive creative director, MullenLowe Singapore said: “On very rare occasions do two legendary names ride together. It would have been tempting to treat them with too much consideration and reverence. Instead, we were emboldened by Maserati’s enthusiasm for experimentation, and after our first interaction with Hiroshi Fujiwara himself we were left under no illusion that our job wasn’t to “advertise”, but to bring a work to art alive, through art itself – via all sorts of explorations from street and interactive art to anime and environmental design. It was both humbling and an honour to collaborate with these masters of their crafts.”