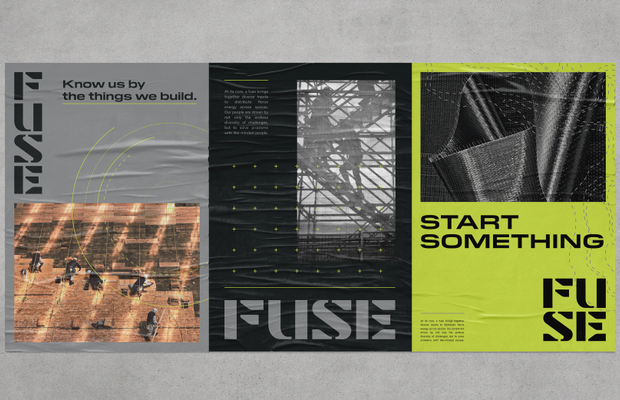 As a construction company that has built some of the most complex and exciting building projects in the US, FUSE Group (formerly Liberty Construction Services) wanted to be known as more than just a great builder, they wanted to be recognized as industry trailblazers. The brand required an identity to claim as its own, reflecting its high performing people and reputation for bold, smart building. To answer this ambition, MullenLowe Design created FUSE, from its new name to its bold, daring and electric brand identity, which will launch internally and externally this month.

“With its new brand identity, FUSE has the flexibility to establish a strong and clear sense of self that is both unique and tied to the Suffolk family of brands,” said Chick Fagan, president and general manager at FUSE. “FUSE’s tight knit teams give us the ability to move fast, unite and spark progress and our new look really projects this image.”

When delving into the culture and purpose of the company to create its new identity, MullenLowe Design was inspired by the core definition of the word fuse: bringing together diverse inputs to distribute fierce energy across spaces. The logo’s bold, 'Fusion' a chartreuse, electric yellow combined with its typography, is deliberately different than typical palettes and identities in the building and construction category. The hero colour Fusion is complemented by a neutral colour palette to help ground the color scheme and balance the high-energy impact of Fusion.

The patterns and graphic elements found in the system speak to the construction industry (being derived from diagrams found in construction documents) while allowing for unique brand expression. The typography, with Pilat as the hero typeface, is designed with a bold weight and square stance. The elements of precision are even calculated into the wordmark of the logo, which evokes a stencil motif often seen on job sites, with consistent negative space and angle cuts using mathematical proportions to render 'FUSE' into a perfect square, vertical, or horizontal lockup.

“FUSE’s brand identity perfectly combines the elements of building with its active and electric culture,”  Sean O’Brien, Director, MullenLowe Design. “Their new look is not unlike a sports performance brand and is a major departure from anything you’ll see on a construction site or in an office. We are confident that the new company image will galvanize a sense of pride and forward-thinking, whether worn on a jacket, presented to client or signage on a jobsite.”

FUSE’s tagline, 'Start Something' channels the company’s commitment to transforming the construction experience and its spirit of revolutionizing an industry. It’s strong mission statement:  “Know us by the things we build.” echoes its “can-do” attitude that permeates its culture and ethics.