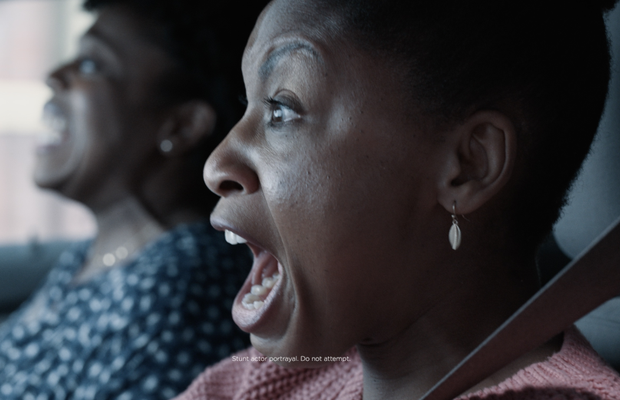 Navy Federal Credit Union (NFCU), launches a humorous new campaign this month with its military members and their families imagining what life would be like without the world’s largest credit union with the promise, ‘Our Members are the Mission.’

The spots, created by MullenLowe US, begin with members casually talking about the benefits of Navy Federal Credit Union, from cash back to savings, auto loans and rewards. They all state, ‘I can’t imagine where I’d be within them.’ The mood quickly changes as the members watch in shock as dramatic scenes unfold in a world without Navy Federal Credit Union. In ‘Freeze,’ a member discovers she left her NFCU credit card at a restaurant and her friend takes her on an action movie-like car chase back to retrieve it before it is compromised. ‘Car Wash’ leaves a member and his friend in the middle of a carwash tunnel chaos without his car, getting sprayed, scrubbed and dried. ‘Game Console’ imagines buddies resorting to a halfhearted game of charades without their gaming system as entertainment. ‘Treehouse’ features kids playing in a DIY treehouse built by a couple who paid for it with their extra savings. Suddenly, the parents are taken aback as the kids are clinging to branches with loud squirrels and no treehouse.

Knowing the dedication of NFCU’s member service team, MullenLowe US approached the creative strategy with scenarios of what would happen to members with the support of Navy Federal Credit Union out of the equation.

“This is our first big campaign for Navy Federal Credit Union where we could start from scratch and create a funny and consistent concept with NFCU as the hero,” said Jon Ruby, group creative director at MullenLowe US. “The sly humour is an outlier in the category, which tends to be a little more straightforward, conservative and serious.”

MullenLowe was charged with featuring multiple branches of the military in the campaign, given that NFCU services active duty, veterans and their families from the Army, Navy, Marines, Air Force, Coast Guard, and Space Force. The creative and production teams work with a military consultant and veterans on the NFCU team and at MullenLowe to ensure that casting, wardrobe, and tone is on the mark and accurate.  NFCU and MullenLowe also worked with Vets2Set, an organisation that helps military veterans find work on production sets.

MullenLowe’s sister agency, Mediahub US handled media for the campaign, which will appear nationally starting this month.