My Most Immortal Ad: Davud Karbassioun on Honda 'Cog' 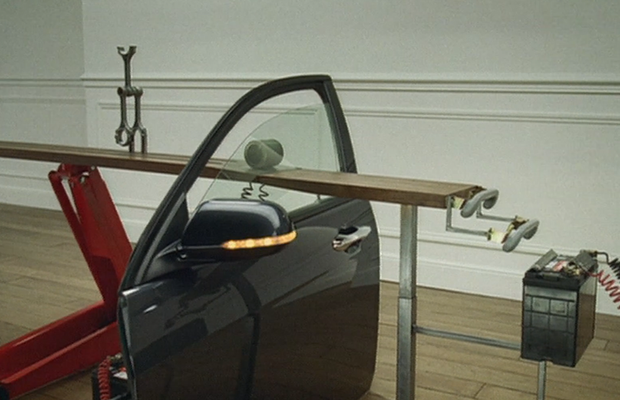 With just a few weeks to go until this year's Immortal Awards deadline, our jurors have been taking it in turns to select the ads and campaigns that are most immortal to them, revealing the reasons why they've stayed with them until this day.
Today sees Davud Karbassioun, president of Pulse Films, head back to 2003 to explore two minutes of masterful, meticulous production from Wieden+Kennedy and Partizan for Honda...
The deadline for this year's Immortal Awards is Friday 10th September. More information on how to enter can be found at the bottom of the article.

I remember seeing the film for the first time.
I was a junior producer at Leagas Delaney in 2002. A creative called a few of us into his office and pressed play on a new Honda commercial out of Wieden+Kennedy London.  We all watched the two minute, one-shot wonder in silence with our mouths wide open. None of us ever having seen anything like it before.
It was so impressive, complex but effortlessly simple at the same time.
I remember feeling like we were watching something that broke the rules and changed everything.
Two mins (yes, no cut-downs) of just the product, every detail, every COG of the new Honda Accord.
No people, no titles, no tricks, no cheats, no tricks, and until the last seconds no voiceover, no track!!!
It wasn’t a cinematic scene from an art house movie, it was ART.  A film that you couldn't take your eyes off and needed to watch again and again (which we all did without getting bored at every awards show that year).
The director Antoine Bardou-Jacquet knew his job was to not let anything break the spell and make it (look) simple in one take (or two spliced together as I later heard).
The film pre-dated Youtube by two years but seemed to predict a trend for meditative, in camera, how-the-fuck-did-they-do-that filmmaking…
Oh and just to rub it in, they license Rappers Delight by the The Sugarhill Gang and just play it as the finale. Finishing with an introduction to one of the greatest cast voices in advertising in Garrison Kielor, and a line - “The Power of Dreams” - introducing us all to one of the most incredible advertising campaigns ever made.
The brainchild of the now legendary Tony Davidson and Kim Papworth, Ben Walker and Matt Gooden, who sold it to the brand as “an engineering problem”.
A masterclass of meticulous production helmed by James Tomkinson (Partizan) and Rob Steiner (Wieden+Kennedy London).
Credits
Client: Honda
Campaign: Cog
Agency: Wieden+Kennedy
Producer: Rob Steiner
Creatives: Matt Gooden, Ben Walker
Production Company: Partizan Midi Minuit
Director: Antoine Bardou-Jacquet
VFX & Design: The Mill
VFX Producer: Fi Kilroe
Shoot Supervisor: Andrew 'Barnsley' Wood
2D Lead Artist: Andrew 'Barnsley' Wood
2D Artist: Adam Grint
Assist: Dave Birkill
Entries to The Immortal Awards are now open and Little Black Book members can make their submissions here today.
Entries into The Immortal Awards will be accepted until September 10th 2021. All entries must be made for a commissioning client, and must have first aired, broadcast, displayed, launched or published between 1st September 2020 and 31st August 2021.
Every member of LBB is entitled to up to five entries, depending on their membership tier. This year, Bronze members receive one entry, Silver members will receive two entries and Gold members will receive five entries. The full list of rules, including eligibility dates, can be found here.
If you’d like to enter the Immortal Awards but you’re not yet a member of LBB, sign up here today. If you’re already a member and would like to increase your number of entries, you can upgrade your membership here.

My Most Immortal Ad: Heidi Black on GEICO's 'Unskippable Family'

My Most Immortal Ad: James Cloete on Budweiser's 'Wassup'

My Most Immortal Ad: Juan David Pardo on Leica's '100'

My Most Immortal Ad: Anthony McCaffery on Channel 4's 'Meet The Superhumans'

My Most Immortal Ad: Rodrigo Rodrigues on Guinness' 'Surfer'