Native Music Reveals How They Created Sound for 'The Fearless'

Native music runs down how they created the music for the BBC's intense, brooding Winter Olympics animation 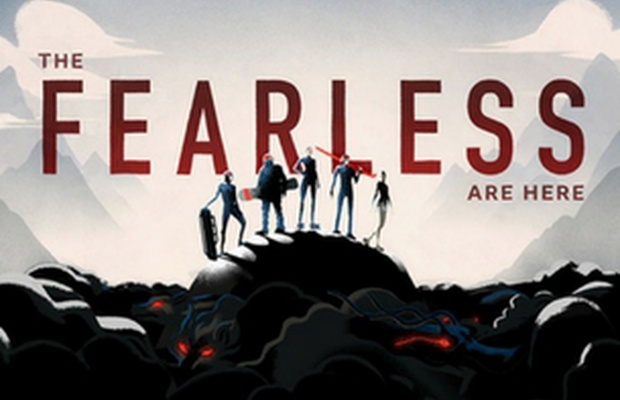 Native Music Supervision and Production, the BBC and Y&R London worked together again for the BBC Winter Olympics 2018 trailer.

The film, entitled, 'The Fearless' is the latest in a long line of outstanding Olympic trail and broadcast packages that the agency have produced for the BBC.

The following is a statement from the Native team about how they produced the music for the spot.

We were brought in at a very early stage, when the directors Smith & Foulkes at Nexus Studios were at the animatic stage. From the very beginning the concept was that the music should be built around authentic Korean drumming, and should be a composed piece so that it intertwined perfectly with the sound design. As well as the animatic we saw some concept art, that showed the intended look and feel, and we knew it was going to be visually stunning and abstract, and that the music needed to match the tone everyone was heading for. It was a tricky balance as everyone wanted it to feel edgy and dark, but not too scary. It had to follow the arc from abstract and unusual to heroic and epic, and there needed to be a strong theme to tie each trail, the titles and the broadcast package together.

We studied Korean drumming in depth and discovered two drums that they would use as the foundations for the track – the Buk and the Janggu. These are both relatively versatile instruments and can produce a variety of tones and sounds. From big, booming hits, to sharper ‘clack’ sounds made from hitting the rim of the drum, they provided the perfect palate to begin building the track.

Whilst the brief called for something modern and edgy, we still wanted it to feel recognisable as an Olympics promo so were wary of making it too electronic and abstract. With this in mind we used a lot of traditional, organic instruments and textures that you might expect to hear, such as strings and brass, but played them in an unconventional way. For instance two french horns playing a single sustained note, but with each player drifting slowly in and out of tune with the other created a familiar yet unusual and unsettling drone. Also a heavily effected organ playing the main theme, and reversed drum rhythms helped contribute to a sense of unease. We also spent a lot of time (and had a great deal of fun) creating twisted, synthesised sounds to layer in and help give the track a modern edge.

All of this, along with with the sound design and visuals, combined to create an almost dream-like portrayal of fear – an emotion many of the athletes must at some point have had to battle with in order to compete. You certainly wouldn’t catch us hurtling 80mph down an icy track, headfirst on a plastic tray.

The final part of the film is where everything comes together to create an epic finale, and is where the music needed to be at its most heroic. We let the orchestral elements take centre stage here, with french horns boldly playing the theme, and ostinato string lines bringing a sense of urgency and action, all still counterbalanced with distorted synth layers underneath to maintain the other-worldly tone.

We’re really pleased with how the spot has turned out, and are incredibly proud to be the soundtrack for what promises to be another fantastic games.