As part of a series celebrating the iconic studio’s 25th anniversary, Nice Shoes’ producers reflect on the company’s past, present and future… 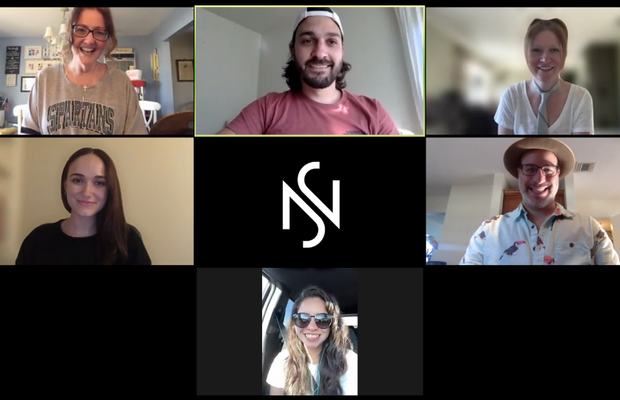 There are precious few companies which can claim to have had as meaningful and enduring an impact on our industry as Nice Shoes. Originally co-founded by Dominic Pandolfino in 1996, the past 25 years have seen the studio bring to life some of the most iconic work in short and long-form alike.

In this series of articles celebrating the studio’s 25th anniversary, we’ll speak to the people who made it all happen - as well as those behind the work that continues to push boundaries today.

Here, six producers reflect on how the company has evolved and maintained its distinct culture, and the impact that culture has on their day-to-day roles. Executive producer Tara Holmes, co-heads of production Elizabeth Fitzpatrick and Jason Farber, and producers Serena Bove, Andrew Pandolfino, and Charis Mound spoke to LBB…

Jason Farber> You know it’s funny, in a lot of ways it’s a completely different company. But in a lot of other ways it’s exactly the same. What I mean by that is that I’ve been here for 15 years now, and I came up having started working in the shipping department. That sentiment of giving opportunities and helping staff realise their potential is still here even after all that time, and it obviously creates quite a distinctive, family-like culture at the company.

But what’s certainly changed is that back when I started it was all colour and finishing. Whereas now you look at us and we’re an end-to-end production company - I would struggle to think of anything the team here couldn’t do. So while the culture has stayed the same, the capabilities have expanded hugely.

Elizabeth Fiitzpatrick> I guess you could say that the day I started working with Nice Shoes was 25 years ago as a client - and I would agree the culture and attitude of this place has stayed consistent!

Nice Shoes is still one of the best post production companies that exists.  The production staff is kind, helpful, knowledgeable and have been no matter who made up that staff. The talent is unmatched and has always been the best of the best. No matter when you called Nice Shoes you could rely on dealing with great people and getting outstanding work.

What Nice Shoes has done and done really well is evolve. When you think about technology in post production over the last 25 years and all of the advancements that have happened it’s mind-blowing - but no matter what the next big thing was, Nice Shoes was already there with the knowledge and technology to meet the need.

Charis Mound> I joined Nice Shoes a couple of years ago, in the summer of 2019. I was working in our office in Toronto, and it was easy to get used to the smaller environment - forgetting that you’re a part of a much larger team of people located all around the world. What’s changed due to the pandemic is that we’ve found new ways of communicating, which I think has bought us all closer than ever. I love chatting with and learning from my colleagues around the world.

LBB> Before you started working at Nice Shoes, what were your impressions of the company? And has the role lived up to your expectations, or subverted them in any way?

Tara Holmes> Coming into a management position here from outside the company, I was definitely aware of how close-knit everyone was. Fortunately everyone was incredibly welcoming, but it was definitely a culture shock compared to places where I’ve worked in the past. I feel like in most places you’re lucky if you just get along with your co-workers, they certainly don’t feel like family! So that’s been something new I’ve experienced over the course of my five or six years here so far.

Charis Mound> When I joined I remember thinking - wow, these guys are cool - maybe too cool for me!

The role has exceeded my expectations. I knew nothing about Production when I started with Nice Shoes and I’m incredibly proud of the progress I’ve made. I’ve learned that being a producer is a role you can make your own - using your own personal strengths/style to make lasting connections and get the job done while keeping your clients and artists happy.

Serena Bove> So this was my first job out of college, meaning I didn’t really have ‘expectations’ so much when I first came into the company. But I’ve been able to work my way up here so I’m grateful to that culture Jason alluded to. It’s true that the mentorship we have here is amazing, and I wouldn’t be in the position I am now without it. As an extension of that, I also feel it’s my responsibility to kind of pass it along, y’know. So it’s a brilliant, self-fulfilling thing.

LBB> What does it mean to you to be a producer at Nice Shoes?

Elizabeth Fiitzpatrick> A lot! I haven’t made up an ounce on anything I’ve said. To be asked to be on this staff means people will rely on me for great work and I’m proud to have the chance to do that.

Andrew Pandolfino> To me, the role of a producer is an opportunity to be an integral part of really great work. You act as a bridge between a group of very talented and dedicated artists, with a variety of expertise, and our clients.

I absolutely love when you're working on a great project, and you get to be the one who shares that work with the client. You’re the first one to hear their feedback and appreciation, and then get to spread that back to everybody on your team who worked on the project. It just makes everyone feel proud of all the hard work that was put in and contributes to that culture we’re all talking about.

Jason Farber> I also think that being a producer at Nice Shoes specifically adds an interesting dynamic. A lot of places will very much specialise in a specific thing, or they have different departments that are kind of isolated from one another. So you are a producer for that specific thing - whereas with Nice Shoes you’re part of a much more fluid setup. Whether it's long-form, or design, or VFX, or VR, or whatever, there are always new opportunities. There are no boundaries if you want to learn some of those things. No one's stopping you from talking to your coworker and getting on board, learning different avenues of your career.

LBB> What’s the best bit about working for Nice Shoes?

Tara Holmes> At the risk of repeating ourselves, it’s got to be the people, right? Of course, you have to have a competitive nature to succeed in this business and we do have that, but there’s a clear line between competitive and unpleasant and everyone here is so perfectly on the right side of that line. It’s a pleasure working with everyone on our team - and as a producer, that’s a pretty great place to be.

Serena Bove> Another thing I’d add is confidence. Specifically the confidence that everyone here has your back, and the confidence you feel you’re giving clients by letting them know you have theirs. You also get to project manage so many personalities here and it’s awesome to see how everyone vibes together.

LBB> We hear a lot about the Nice Shoes culture. What do you think contributes most to the unique feeling of the company?

Serena Bove> It’s got to be communication and teamwork. It’s invaluable to know that everyone is able and willing to help each other out, given how much we all tend to have on our plates. I think just communicating with each other and knowing that we're there for you if you’re too swamped, that’s how you create a great atmosphere.

Jason Farber> And the pandemic has made that especially important. It’s not like we’re all in the same office and can easily chat at a moment’s notice. Huge credit has to go out to Paul [DeKams, marketing director] and for wrangling us together for town halls meetings, happy hours, and other opportunities for us to communicate, collaborate, and develop that culture.

Charis Mound> And let’s not forget about the free pizza! We need to bring back pizza Fridays working from home, for sure.

LBB> We also hear a lot that Nice Shoes is like a family. If Nice Shoes were a famous sitcom family, which one would you be and why?

Jason Farber> How about The Simpsons? That’s a show where it started out as a core group of four or so but it expanded to be about so much more that made up the whole town.

Tara Holmes> Yeah I like that one, the characters don’t age!

Andrew Pandolfino> Ha, that’s a good one. I was thinking Cheers - maybe not a biological family, but one which is always there for each other.

Elizabeth Fiitzpatrick> Definitely Cheers. As well as that point about being a family, there’s so much else. The owner is full of great stories about the glory days. Sales (Diane) is smart and welcoming. The producers (Carla) are quick and, well, a bit foulmouthed. The talent (Coach/Woody/Ciff/Norm) are all completely different but make the place feel like home. And the bar itself always has good cold drinks and the customers keep coming back.

Serena Bove> I think that nailed it!