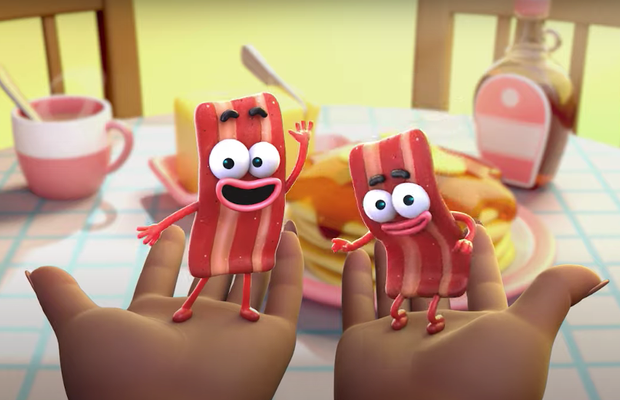 Oscar Mayer has launched a series of new spots as part of its new beloved Keep It Oscar brand platform at a time of major creative transformation for the brand.

In a campaign that’s more akin to pop-art than traditional commercial campaigns, and a nod to what once made Oscar Mayer iconic, the new work continues to break the mold of traditional CPG advertising with ads that don’t look or feel like advertising at all. By looking at OM’s most iconic work such as the Wienermobile and ‘My Bologna Has A First Name’ song, lead creative agency Johannes Leonardo together with Oscar Mayer set out to re-create a brand platform that was inspired by the old, modernised for today.

Expressed through bite-sized ‘meat content’ in the form of :15s, :06s, and :05s, you’ll find almost no context or narratives, breaking the format of comedy commercials and zeroing in on the parts that people love most: the wonderfully odd, humorous parts. The work is intended to show up just like the Weinermobile does without needing much explanation and leaving a trail of grins in the rearview mirror.

In ‘Sandwich Ghost,’ a queen feeds the ghost living in a pyramid by taking a bite of her Oscar Mayer sandwich. In ‘Sandwich Bed,’ a blissfully sleeping woman drops softly onto a slice of bread and is blanketed by a cascade of Oscar Mayer meats and sandwich toppings. In ‘Pick Me,’ two pieces of Oscar Mayer bacon vie to be eaten by the woman holding them, by any means necessary.

To help create this work, JL approached a wide variety of talented and creatively diverse 2D artists, 3D artists, stop motion directors, CG houses and film directors. From unsigned artists straight out of art school to creators at the top of their field, including renowned commercial and music video director Calmatic and Andy & Adeena, a talented director duo known for their work with Wes Anderson, among others, Keep It Oscar delivers a consistent approach with an ever-evolving and always unexpected look and feel from spot to spot.

Keep It Oscar first launched in April marking the brand’s first master campaign in decades as both an attitude and an invitation to look on the lighter side of life - a new creative rallying cry and state of mind built to unite the entire portfolio of products. In its first national advertisement, a ‘Yum Choir’' gave the word ‘yum’ - a natural reaction when thinking about Oscar Mayer meats - a reverential choral treatment to celebrate the brand, and launched with subsequent ads including ‘Dancing Bacon,’ ‘Turkey Record' and ‘Laser Eyes’ across TV, social, OOH and Tik Tok.

Keep it Oscar marks the first collaboration between Oscar Mayer and NY-based advertising agency Johannes Leonardo, which became the AOR in 2020.