OutSystems Sums up 2020 in Memes, TV Shows and the Year's Weirdest News Headlines

Pioneer of modern application development launches its 'How Fast Are You?' campaign by Creature London - a digital infographic comparing time spent coding with 2020’s cultural milestones 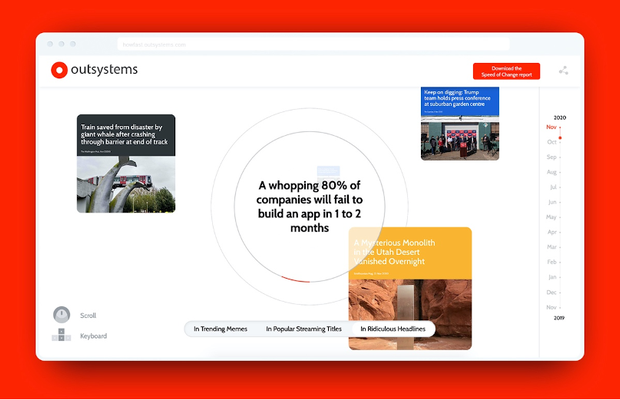 Global technology company, OutSystems, has launched a new campaign today to highlight the time-saving benefits of building software with its industry-leading, modern application platform.
'How Fast Are You?' compares the time it takes to code with culturally relevant events from 2020 that everybody, not just developers, can appreciate. Hosted as an interactive microsite, the digital infographic allows visitors to sum up the year in either memes, TV shows, or ridiculous news headlines, and discover the benefits of building applications faster with OutSystems as compared to the inefficiencies of traditional coding.
Throughout the experience, visitors will be served with OutSystems case studies highlighting how customers have been successful in building a wide array of solutions with the platform. It provides a fresh perspective on the dramatic results that can be achieved by building with OutSystems.
'How Fast Are You?' is the first piece of work for OutSystems by creative agency Creature London and is a precursor to a global brand campaign launching in 2021.
Ben Middleton, chief creative officer and co-founder of Creature London, said: “In a year where it's felt like time has stood still it felt appropriate to have a bit of fun with the concept of time itself. So, with our partners at OutSystems, we binned off boring old seconds, minutes, days, and hours and allowed customers to measure it in memes, headlines, and popular streaming titles. They could then see just how quickly they could have built an app if they'd been using the OutSystems platform.”
The campaign will be promoted across Reddit, Twitter, and Facebook and, unlike a traditional static PDF Infographic, the microsite will be updated regularly to include the latest cultural examples to stay relevant.
“For developers, traditional development tools are causing software projects to last longer and longer, and this year’s crisis has put even more emphasis on speed of delivery,” commented Robson Grieve, CMO at OutSystems. “OutSystems is changing the relationship developers have with time, and we are thrilled with the fun and unique way this campaign highlights the benefits of modern application development.”
You can experience the campaign on the dedicated microsite.