Alex Borthwick, director of digital strategy at Toronto Arrows R.F.C. (part of North America’s burgeoning professional scene), and Alex Shifrin, president of LP/AD, on the lasting effects of Covid-19 on the sporting world 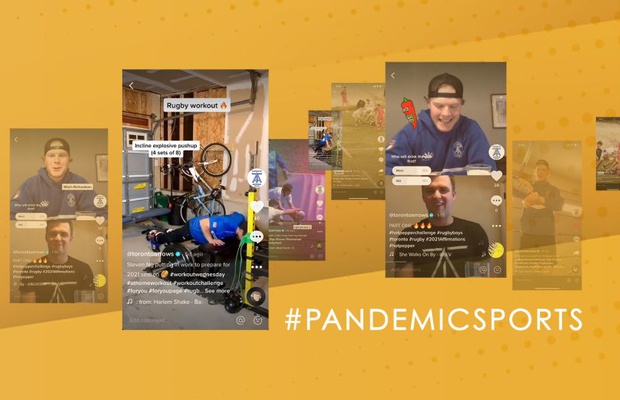 With all sports fixtures affected in some way by the pandemic, sports marketing and creative has had to heavily pivot in order to stay relevant to an audience hungry for content, yet fatigued in their own ways. Professional rugby in North America, very much a start-up venture, faces some unique and representative challenges.

The first challenge is rebuilding trust. When the plug was pulled on the season last year, many fans were left wondering what would happen with season tickets, the health of their team, or the league as a whole. Healthy and established organisations, such as the NHL or the NBA, were always expected to weather the storm. However, smaller leagues such as Rugby Union’s Superleague or the MLB’s minors underwent some dramatic shifts, which left fans wondering whether it was worth supporting them in the long run.
Today, revenue has become secondary. The first goal is now trust and loyalty. The interruption of a season has happened before in professional sport. The back to back NBA and NHL lockouts in 2011 and 2012 left fans alienated. It was difficult to feel sympathy when it felt like it was about rich players getting richer at the expense of the fans. This is very different. This time it feels like we’re all in this together and there is sympathy. Sympathy from fans, but also sympathy from sponsors and partners. Everyone feels like they’re running headfirst into the unknown, and thus the whole financial question has been removed from the equation. Trust needs to be rebuilt, but the fans have given sport a lot of rope.
However, entry level games need to play.

It is generally very difficult to plan anything not knowing the extent to which one will have a season. This state of helplessness and flux has become retail, as kids are pulled from school and lockdown orders are put in place. There’s a general sense of helplessness in that things are happening to you, rather than you having control of them.
This has given priority to a whole new revenue model for sports, which is rooted in a re-imagined game day experience. It’s important to note that for professional sports, most games are generally viewed on a screen anyway. Ticket sales and arena proceeds are critical, as is stadium advertising revenue, but in-person viewership has always been finite and any league doing it right has relied on broadcast to homes, bars, and other establishments to reach the widest audience. Now, however, with restrictions in place for likely the next year or more, the expanded experience is where it’s at.
The infinite audience approach looks to capture a wider net of interests by making available not just the game, but value-added experiences such as watching the game online or on television, followed by post-match activities online. A press conference, exclusive interviews with the manager and players available at a premium, perhaps an exclusive virtual event with the team via Zoom for a select group of fans. The approach is to make the remote experience bigger than the live experience. To really exceed expectations and turn the fanbase on to a new understanding of ‘game day’.
It’s really about a bigger off-the-field content play.

The NBA did this years ago and continues to do it better than anyone else. When a team sport was a chance to see and cheer on your hometown, the NBA took that to a new level. They created superstars outside of the stadium. Think LeBron James, Kareem Abdul Jabbar, Larry Bird, Wilt Chamberlain, Magic Johnson, Dr. J, Shaq and MJ. The NBA put armies of publicists behind players to make them larger than life. You knew everything about them on and off the court and that content sold merch, season tickets, Nike shoes, cereal, film, video games, anything. Even the uniforms helped. When you watch a hockey game, the players are covered in layers of protective game gear. You don’t see them. Basketball is more revealing. When you went to watch a basketball game, you were there to watch rock stars. It’s like watching Mick Jagger running the court. In his underwear. The NBA exposed everything about their players in and outside of the game.
This is the future of sport. And it’s all digital. The challenge now is to reveal more about the players and their lives and make that part of the broader game experience. Just like the NBA. With sports stars, sometimes you dehumanize them. They’re famous. They make a lot of money. They’re not you. They are still human, and like many people today, they’re also not working. So, you develop a story and a narrative around that. You look at how they’re spending their time, how they’re exercising to stay in shape, how they’re staying mentally fit, you explore their sense of humour and that finds its way to TikTok, Instagram and other owned platforms. That’s the story of sport today and the creative foundation to stay connected to fans.
In one short (read: long) year, we’re now playing a very different game.

Sport, as anything, is now competing in a much bigger arena. People in lockdown only have 24 hours in a day and generally one screen to devote their attention to. So, rugby is now competing with hockey, basketball, soccer, birthday parties, work meetings, news, home-schooling, YouTube rabbit holes, Amazon shopping junkets, Netflix binges, Friday night get-togethers, and an exhausting list of anything and everything. It’s a tougher sell for any piece of content to find itself in front of a pair of eyes these days.
The upside is that we have better and unprecedented access to players. And players are the one who put “bums in seats”, wherever those seats are. No one else. Players are more willing to create content. Superstar players are less precious about their time. They’re more willing to go along, especially in start-up sports like North American Rugby. We have the ability to create unique and much more engaging content, built on some of the sensibilities that the NBA has paved for sport in general.
And that’s kinda how we’re going to do it.
Alex Borthwick is director of digital strategy at Toronto Arrows R.F.C. and Alex Shifrin is president of LP/AD

LP/AD Explains to Canadians What Rugby is All About in Campaign for The Toronto Arrows R.F.C.

A New Kind of Ball Game