Past, Present and Future: Jungle Sound Designs Radical Retelling of 'A Christmas Carol' for 2020 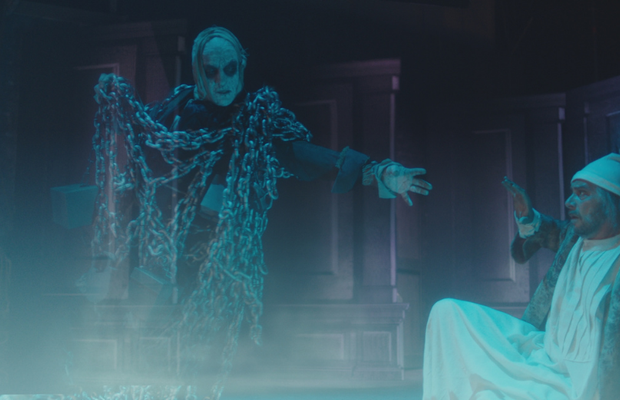 2020 has served up a new feature film version of ‘A Christmas Carol’ like you have never seen before. This retelling of Charles Dickens’ classic story from sister-brother directing duo Jacqui and David Morris is part contemporary dance, part audio play, part theatre production and a part feature film all in one.
In this adaptation, the novel’s well-known characters are portrayed by dancers and voiced by a variety of top acting talent including Martin Freeman, Simon Russel Beale, Daniel Kaluuya, Carey Mulligan and Andy Serkis. The narrative follows a Victorian family as they prepare for their annual performance of 'A Christmas Carol', which takes place in a toy-theatre where the real dancers and stylised sets come alive.
With high profile voice actors and a unique intersection of visual, aural and performance arts, Jacqui and David called on the help of Jungle Studios to craft the sound design for this special piece. We speak to Chris Turner to find out how he brought both the humbug and the Christmas magic to this intriguing new film.

LBB > How long were you working on this feature?

Chris Turner > I spent almost a year between other sessions sound designing and bringing all the elements together as well as field recording for the film. Stuart and Alex then spent a month with me as we finalised the piece.

LBB > How closely did you work with the director?

Chris > I worked very closely with Jacqui - we caught up about once a fortnight. It was an interesting process as knowing how to approach the sound design was, without a doubt, puzzling. However, with the strength of all these arts and talent combined - world class dancers and choreography, award-winning A-list actors, a theatre set with so much detail I still can’t stop looking, direction with an understanding of how all these elements would come together and the best adaptation of Dickens I’ve read - it was obvious that it needed a multi faceted approach.

LBB > So how did it work on set, were there any challenges?

Chris > The film was recorded to temp music, so no production sound was usable except for the intro and outro sequence. For this reason, every sound - from footsteps to chained up ghosts - is designed to be heard without distraction. What you hear is exactly what we want you to hear.
The second challenge was working in tandem with the composer. As he was writing the score we were designing the sound and therefore there were many conversations about how the key, tempo and tone would fit the scene.
The third challenge was not having any of the VFX elements to work with as we went. In many ways, this allowed us to design the ghosts that we imagined rather than designing to a visual cue.

LBB > How did you strike a balance creatively between the theatrical elements and the cinematic?

Chris > Overall we felt there could be a chance of a disconnect between the acted voices and the dancers. For this reason, we added far more detail into the foley elements than would generally be needed. There are many subtle layers that bring the choreography into the real world when needed and fade it out when not.
To bring the recorded dialogue into the stage environment we used a technique that hasn’t been used in quite some time – Worldising. We hired a theatre and played the dialogue into the room, recording the real reflections and echoes in that space. When the worldised element was brought into the tracklay to mix the film, suddenly all the elements came together.

LBB > Where did you record the elements to make it sound like the mid-1800s?

Chris > Creating Victorian England is a painstaking job. Of course, there was no traffic or no planes then. The street noises were completely different - even accents in the background were different to what you’d hear now. As a result, many of the soundscapes and scenes were recorded in Bath due to it being very pedestrianised and cosmopolitan. Here we were able to record crowds, church bells and background tones free from traffic and planes.

LBB > What was your favourite part of this project?

Chris > My favourite piece of sound design in this film is the church organ playing Hark the Herald at half speed. The most difficult part was syncing the chain link foley to the action and processing it to give a real sense of the weight of them.