EE is giving foosball fans the chance to go head-to-head with famous faces including Gareth Southgate, Chelcee Grimes and more in the world-first tournament 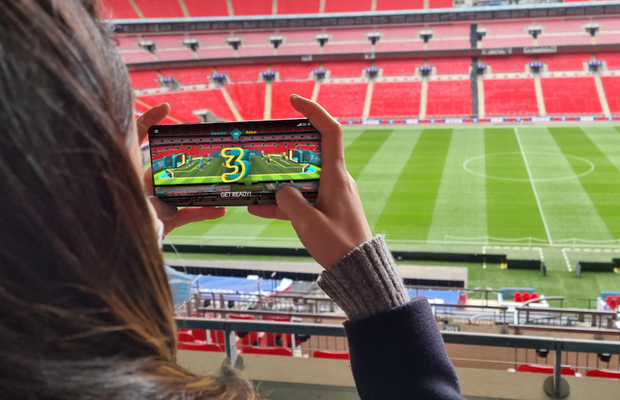 Two competition winners, along with a plus one, will have the chance to play 5G Foosball after the tournament with the football legends and celebrities, including England manager Gareth Southgate, songwriter Chelcee Grimes, and rugby player and TV personality James Haskell,  along with others, at the UK’s most iconic football ground, Wembley Stadium, later this month, as well as enjoy the entertainment as they slide, power kick and bounce to the top of the tournament.

Launching Thursday 15th April, the competition will be available for all EE customers across the UK and will operate as a ‘like and comment ⚽ to win’ via EE’s Twitter. Whether they emerge victorious or admit defeat, the lucky line-up of competition winners will take home an  epic Samsung Galaxy S21 5G as well as enjoying a meet and greet with the full line-up of stars.

Sam Kemp, products and devices technology director at EE said: “We’re excited to be giving our customers a one-of-a-kind experience from the most iconic sporting venue in the world. Live from Wembley turf, they, along with our nation’s sporting greats, will be putting our network to the test, in the ultimate game of AR foosball. Our customers are always a step  ahead at Wembley Stadium, but during the tournament, our award-winning 5G capabilities will ensure they’re on equal footing – whether they’re head-to-head with an England manager or defending against a football legend – you won’t miss a kick!”

EE is the lead partner of Wembley Stadium, making it the most connected stadium in the world. Since the partnership kicked off in 2014, EE has introduced many technological advancements including EE’s publicly available 5G network, unlocking new capabilities, so customers are always a step ahead and fans are always connected.

For more information on EE’s Wembley competition and to enter, please visit EE on Twitter and find the T&Cs here.