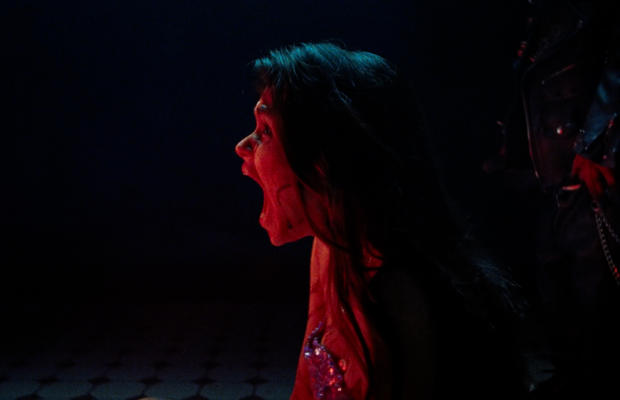 After years in the music industry, it’s natural for bands to evolve their sound. For one girl group, however, the shift from aggressive heavy metal to marketable pop comes at a brutal cost. Directed by Great Guns’ Ilya Naishuller through his own production company, Versus, in Moscow, the graphic 18+ music video for Naishuller’s own indie rock band Biting Elbows follows the ultimately deadly evolution of Boy is Dead - as one member deals with the idea of selling out.

The film begins at a school talent show, as young girl group Boy is Dead appears on stage, performing a strikingly thunderous heavy metal song. Cut to the future, the band has evolved to glamorous, marketable pop music, appearing on chat shows and winding in their original gothic image. Despite the success, however, one member struggles with the band’s new status. Confronted by a disappointed young fan, her imagination is triggered. One night, as her bandmates are partying, Satan himself appears next to her at the bar. Encouraged by his presence and in a fit of rage, she brutally murders her manager and bandmates. Before she’s able to take her own life, the reanimated corpses of those around her rise up, with one hitting her around the head with a guitar. Waking up, she’s back behind the curtain of the chat show, gazing out at her bandmates.

Shot over two days and starring a mix of Russian movie stars and TikTok personalities - as well as a cameo by the young star of Ilya Naishuller’s recent spot for Brusnika - ‘Boy is Dead’ is Biting Elbow’s latest foray into cinematic, story-driven music. The promo is also part of a collection of 15-25 minute short films, entitled ‘A Musician’s Nightmare’.

Director Ilya Naishuller comments: “I think sooner or later, everyone that plays in a band faces a moment of uncertainty towards the other members. If a band is a living organism, what happens when its legs start walking in different directions?”