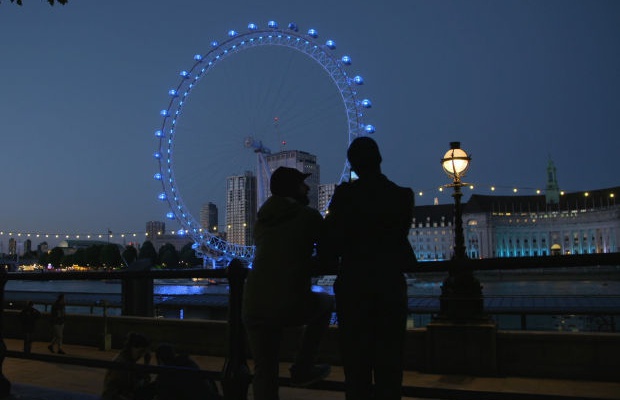 In a large-scale stunt that spans all the way from London to the USA, Porsche and Grabarz & Partner have started an unprecedented dialogue. The participants? Very bored and underused electricity and the sports car manufacturer. The campaign, aimed at a younger demographic, focused on social media hype by introducing #ElectricityTalks. The stunts that followed acted as the prelude to the first fully electric sports car with the soul of a Porsche: the Porsche Taycan.

On the 30th of June, a puzzling scene occurred in London. The London Eye - one of the most recognised landmarks in the world - suddenly began to flash randomly and emit strange sounds. Influencers and bloggers filmed the unusual spectacle and posted live videos and short film sequences on their social media channels. Millions of followers started to rack their brains: what exactly was happening in London? What was behind the mysterious blinking lights on the London Eye? Followers’ suggestions ranged from possible alien landings to a teaser for the new James Bond film. But no-one was actually able to explain what was going on in London.

Mysterious social media accounts set up at the same time fuelled this curiosity. The Twitter user ‘Electricity,’ for example, tweeted ‘Hey London, there is something I have to say. Meet me tonight at the London Eye. Love, Electricity. #ElectricityTalks’. Numerous Londoners as well as influencers shared the impressive images from the Thames via their social media channels. As magazines began to report on the event, the content reached 65 million users in a short space of time.

One day later, a Twitter user was able to solve the puzzle. He identified the message as Morse code and even decoded it. He proudly posted the translation of the London Eye’s flashing lights: ‘Hey Porsche, get me out on the road. Love, Electricity’.

In the spectacular stunt at the London Eye, Electricity turned to the people for the first time – and of course to Porsche in particular – with the request to finally free it from being underused and bored. While electric power was once a powerful, formidable force, it is now reduced to charging electric toothbrushes and driving escalators or illuminating screens. Not exactly exciting.To make sure that the plea really hit home in Stuttgart’s Zuffenhausen region, Electricity also took over the porsche.com website as well as all the sports car manufacturer’s social media channels and repeated its plea.

Soon, the action headed to the US. As part of a guerrilla campaign, the Hoover Dam saw the message ‘Hey Electricity, all that cold water making you numb? Get ready to feel again. Love, Porsche’ projected onto the wall on the night of 10 July. With this message, Porsche promised Electricity that it would finally be given something meaningful to do to counter its boredom: powering the first electric sports car with the soul of a Porsche – the Porsche Taycan.

"With the Taycan, we’re entering into a new era with Porsche and therefore also forging new paths in our marketing communication. With unexpected measures such as the two stunts at the London Eye and Hoover Dam in the USA, we appeal primarily to young target groups and enter into a direct dialogue with them by giving electricity an emotional component," says Oliver Hoffmann, manager marketing communication at Porsche AG.