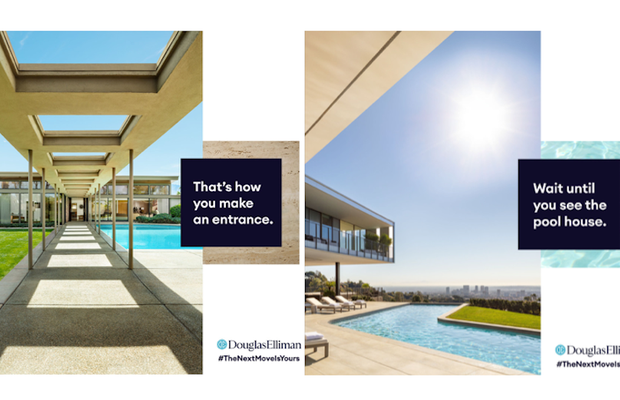 Douglas Elliman, one of the largest independent residential real estate brokerages in the United States, announces the launch of its new advertising
campaign designed and produced in partnership with global advertising agency, Grey. The campaign will integrate media across all platforms, including streaming video, digital, print newspapers and magazines, social media and outdoor advertising.
While paid media for the campaign will commence in March, Douglas Elliman enlisted a roster of dozens of its celebrity and influencer agents - including Eklund | Gomes, The Altman Brothers and Tracy Tutor of 'Million Dollar Listing' - to introduce the campaign on Instagram on 24th February, utilising the hashtag #TheNextMoveIsYours.
"With this new ad campaign, we celebrate our belief that everyone's vision of luxury is entirely their own," said Scott Durkin, president and chief operating officer of Douglas Elliman. "It is our job to turn that vision into reality and connect our clients with the place they want to call home no matter what that may be."
Encompassing the firm's new branding, logo and tagline 'The Next Move is Yours', which debuted last spring, each advertisement underscores Douglas Elliman's commitment to finding every customer their personal, unique sense of home.
After months of research and informed focus groups, Douglas Elliman and Grey established that the definition of home is entirely individual. It could be as simple as one extra bedroom, a pool or even enough outdoor space for a collection of pet llamas. This ideal became the foundation for the campaign playing on aspirational, one-of-a-kind properties to inspire consumer's hopes and needs.
"If Elliman can find these properties, imagine what our agents can find for their customers", added Scott.
Executions include 'That's how you make an entrance', 'A view with a room', 'Wait until you see the pool house', 'The coast is clear' and 'The treehouse they never built you'.
"We are thrilled to introduce our new advertising campaign to the marketplace," said Stephanie Garbarini, senior vice president of marketing at Douglas Elliman. "After sheltering-in-place for nearly a year, there is a new sense of appreciation for our homes and at Douglas Elliman, we understand that everyone's vision of luxury is unique. Our new campaign drives that notion home perfectly."
The new media rollout will debut across digital and print media in all of the markets the company services including Manhattan, Brooklyn, Queens, Long Island, the Hamptons and North Fork, Westchester and Putnam Counties, Connecticut, Florida, California, Colorado, Massachusetts and Texas on 15th March. "It is expected to garner over 40,000,000 impressions," added Stephanie.
In addition, Douglas Elliman is running the campaign on streaming video platform, Hulu as well as the iconic bus service, the Hampton Jitney, to capture the attention of drivers throughout all of Long Island. Douglas Elliman will also make an appearance at the West Palm Beach International airport.

TikTok Owns the Infomercial - and Everyone Is Buying