Problem Solved: How a Simple Hand Gesture Turned into a Globally Recognised ‘Signal for Help’ for Women

Graham Lang, chief creative officer at Juniper Park\TBWA, on the agency’s work for the Canadian Women’s Foundation that became a global tool that women could use to ask for help for protection against domestic violence 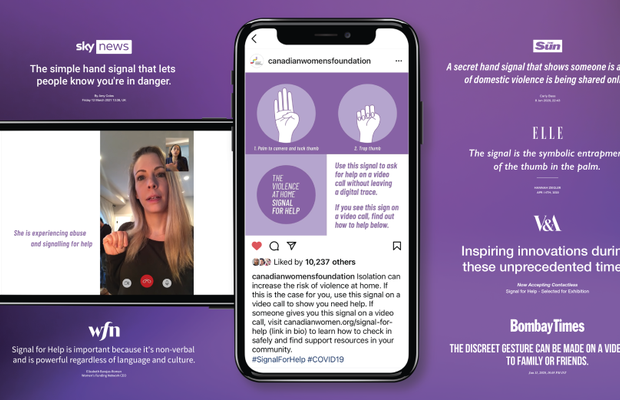 One year ago today, one in 10 women in Canada were concerned about the possibility of violence in the home during the pandemic. Lockdown measures necessitated by it had made it more difficult for those at risk of abuse or violence to safely reach out for help, and there was no simple or covert way to ask for help.
Through a viral campaign from Juniper Park\TBWA in Canada and the Canadian Women’s Foundation, there is now a globally recognised silent, covert one-handed gesture: ‘Signal for Help’. Invented at the height of the pandemic during a surge in gender-based violence, the signal became a tool that women could and were proven to use to ask for help. It has inspired activism and action on a global scale, with 200+ organisations adopting the tool and making local resources available in 40+ countries and in 20+ languages.
As we collectively go through yet another lockdown in Canada, gender-based violence is sadly still on the rise here and around the world. And the signal continues to be deployed by organisations and users on social media to respond. What began in Canada has become a symbol in the fight against ending gender-based violence. So how did it all happen?
Graham Lang, chief creative officer at Juniper Park\TBWA, reveals how a simple hand gesture turned into a viral strategy to help keep women safe during the pandemic one year post-launch.

We invented Signal for Help for the Canadian Women’s Foundation: a first of its kind silent, covert one-handed signal that someone at risk of domestic violence can use on a video call to communicate that they need help.
Intentionally designed as a single continuous hand movement that could be made easily visible and understandable across cultures, the signal involves holding your hand up to the camera with your thumb tucked into your palm, and then folding your fingers down and trapping your thumb in your fingers.
We intentionally designed unbranded social media assets to generate awareness of the Signal for Help so anyone could adopt it. The Signal for Help has been mobilised by a global community, largely as a result of social media virality and PR. It has become an internationally recognised hand gesture that has helped many women all over the world in high risk situations.

When disaster strikes, the incidence of gender-based violence increases. It’s a documented fact all over the world. Of course, the Covid-19 pandemic is a disaster on a global scale. This means that women, girls, trans, and non-binary people are at higher risk of experiencing violence in their own homes. Homes that by law, they couldn’t leave during lockdown.
In March, the Canadian Women’s Foundation was bracing for a surge of violence in the weeks and months to come as the virus made its way to Canada. In fact, a startling figure we came across noted that one in 10 women were very concerned about the possibility of violence in the home during the pandemic.
To respond, we were tasked with interrupting the anticipated increase in gender-based violence by inventing, deploying, and promoting a tool that would be potentially life saving to women in danger during lockdown.
Women facing violence in their own homes are not free to do as they choose. We know that their communications are being controlled and monitored and that they have little, if any privacy. Now imagine how much worse that is in lockdown.
We realised that those at risk needed a new method of communication to ask for help. One that was covert, silent, and untraceable, and could be easily done over a video call – due to our collective global adoption of this technology in our social and professional life’s during lockdown.

Research and development. We started researching different movements, other hand signals, and international sign languages. It was critical that whatever it was that we created was unique and different, to not cause confusion across languages and cultures.
Secondary to this, we began planning how the deployment of this gesture into culture would work. With no media budget available, our options for amplifying the message were limited. Any tool we developed or message we crafted would need to be easily shareable on social media and through PR.
Unlike other gestures for help, such as the American Sign Language sign for help (which is a two-handed gesture), we needed to develop one that could be made by a person while holding their phone – a one-handed gesture was the solution. This was even more important given our mobile devices became our primary way to reach outside of our home and communicate with one another during lockdown.
With the volume of time and the attention people were paying to social media, we were confident the message would travel and garner attention through those channels. People were aware of the increase in violence against women and sharing Signal for Help would make it easy for them to help.
An instructional social media asset (#SignalforHelp) was designed to demonstrate the two-step process needed to make the gesture. The post linked back to the Canadian Women’s Foundation website, where everyone could access a downloadable social toolkit and FAQs were available in English, French, and Spanish.
There were several challenges. The first and most notable issue was timing. Due to the nature of the issue, we needed to turn around the development of the tool quickly to respond to the expected spike in gender-based violence.
The other challenge was finding a completely unique sign. Following the R&D process and numerous conversations with the Canadian Women’s Foundation team, we decided against a few other gestures which conflicted with existing signs before eventually landing on Signal for Help.
It came to us from the idea of tucking your thumb as a metaphor for being trapped.
Creativity should always be used as a force for good. This was a global disaster on a scale like we’ve never seen before. So, the idea was born out of a desire and necessity to help some of the most marginalised and vulnerable.

Learning about sign language and the different underlying meanings associated with gestures was a critical part of the process. Making sure we were not appropriating any meaning from existing languages was very important to us. We landed on a gesture whereby you trap your thumb, as a symbolic reference.
The client was instantly enthusiastic about the idea, but it needed scale to work. The problem was that we didn't have the budget to buy media to ensure that it could go global. So, we were truly relying on the good nature of partner NGOs and women's groups to adopt, share, and advocate for the Signal for Help. There was a chance that it would just fizzle out, but as it turned out, the opposite happened. It has organically grown and spread across the globe, garnering over 1 billion impressions.

Testing and iteration were integral. Before launch, we ran the proposed signal by multiple experts in the fields of sign language, domestic violence, and gender equality to ensure that it would adequately convey our message. A message that involves specific and serious subject matter requires substantial vetting, because the risks associated with getting it wrong are high.
We had to ensure that it was communicated that the process to make the Signal for Help was one seamless gesture rather than two separate hand signs – which are associated with letters in ASL.
While the Signal for Help is a defined tool, we have accepted professional and public feedback on various aspects of it and used it to refine our communications. Whether that be clarifying its difference from other hand signals that are static, noting its limitations, or working with the Canadian Women’s Foundation to provide tips about how to help someone if you see the signal used.
For example, in May 2020, we developed a PSA to ensure people on the receiving end would know how to act and what action to take if they saw the signal. It’s since gone viral on TikTok, helping people around the world visually recognise it and take the appropriate action.
It’s incredibly important that the signal not be utilised for purposes other than intended. Monitoring social media, having conversations with women’s organisations around the world, and keeping an eye on the issue at large has helped us keep its purpose focused and intentional.
The most interesting thing was seeing it go viral. It spread across Canada very quickly, with news outlets, celebs, and influencers all sharing it via social media. But, then it became a mainstream news story on a global scale. Every day there were new updates from a new country. If you Google ‘Signal for Help’ you can see how it’s now part of culture and has become its own entity. And that’s what we always wanted. It’s not meant to be ‘owned’ by the Canadian Women's Foundation, it’s a tool that can be used freely by anyone that needs it.
Before the pandemic if you were at risk of abuse there was no simple, covert way to ask for help. Today there is a globally recognised gesture – Signal for Help. Invented at the height of the pandemic, during a surge in gender-based violence it became a tool that women could and were proven to be using. To date it has been adopted and institutionalised by 200+ organisations around the world including women’s organisations, domestic violence helplines, police forces, and governments, who have made local resources available in 40+ countries and translated it into 20+ languages.
News outlets and influencers have helped us relay the message, with the initiative garnering 1 billion organic impressions across earned media and social media. It has been covered by both Vogue and The Howard Stern Show, and shared by celebrities such as Billie Eilish.
As a result, the Canadian Women’s Foundation has become a global thought leader in gender-based violence prevention and was able to turn international awareness into an initiative that could create positive change. Ultimately, inspiring people around the world to become social activists and learn how to safely answer the call for help – creating a global wave of action.

UNICEF Canada Underscores the Importance of Vaccinating the Vulnerable in PSA