The team at adam&eveDDB dig into the detail on how they designed and developed the NOSEiD app, providing a simple way for people to protect their pets 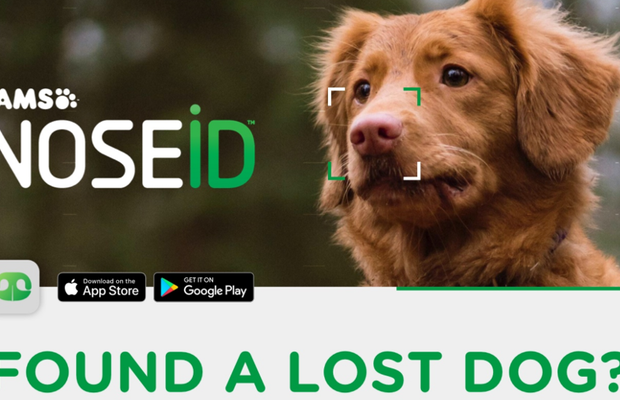 The NOSEiD app was made to solve a genuine problem: that 10,000,000 pets get lost in the US every year and that just a fraction of those make it home.
Microchipping is a powerful solution to dog loss but in the US, it is not compulsory and so many pet owners don’t get their dog chipped. All that’s needed to create a nose scan is a smart phone camera and the NOSEiD app, making it simple and cost-free for anyone to register and protect their dog. It’s a real example of how technology can be used to solve a problem.

Sara> The user testing process was also fascinating as it really made us challenge some of the assumptions we made during the early ideation and when we created the prototype; for example the digital community often talks about streamlining processes like registration to avoid asking people to fill in lengthy forms but what we heard from the beta community of dog owners we’d recruited is that they felt reassured by a product that asked for more detail rather than less. It gave them the sense that everything they’d want someone to know about their dog had been covered.
From a technical point of view, one of the key challenges we had to solve very quickly was to find the data we needed to train the machine learning component of the product; in order to scan and recognise a dog’s nose, we needed a big set of data around what they looked like. Initially, we compiled a database of images of dog noses from image banks to start training and used our own dogs to help us train the ML, but, if we were going to use this tech to save dogs, we knew that we needed to test it on more live dogs.
So we created a very bare bones prototype and recruited a “scan squad” - a group of people who could seek out dogs in parks, and dog hot spots across London and scan their noses to give the scanning tech and intelligent matching behind the NOSEiD app a wider amount of data to learn from.
Sara>  Working with the beta community brought us one of the most interesting challenges of the project - dogs themselves. When a human goes to have an X-ray or an MRI they know to stay still, but scanning a live animal is a very different prospect, and our beta community showed us that whilst some dogs were very chill and obedient, others would sit to be scanned for a lot less time.
Nick> From a technical point of view, we wanted as long as possible and as many scans as possible to create the most accurate nose scan, but from a user experience point of view, we needed creating the nose scan to be something any pet owner could not only accomplish but would not find too difficult.
Consequently, we needed to find the perfect balance between getting the most detailed scans of the nose we could and the optimal experience for the pet owner. Working with owners, we discovered the best scan duration that enabled us to be accurate and also for it to work with more energetic dogs. In the process owners also shared a lot of their tips and tricks with us, and we’ve incorporated a few of these into the interface – like the ‘squeak button’. This came about after some dog owners told us an anecdote about using a YouTube clip of a squeaky toy to get their dog’s attention. We thought this was genius and put a button to recreate this effect into the app itself.
Drew> The emotional response from people when they saw that we included features like an “Automatic Poster Generator” (creates a “lost dog poster” that can be printed or shared to social straight from their phone) was overwhelming. People who had actually lost a dog before commented on how many little things we’d done to make that part of life easier. It was great to hear comments about how we’d focussed on the needs of the owner, not just the dog during such a difficult time.
Nick> Mars Petcare has an amazing network of pet specialists who have helped us to shape the product. During development of the product we were able to speak to several of Mars’ shelter partners in Nashville who gave us amazing insight into the types of things that help them identify a lost dog when it comes in to them and the process that many pet owners who’ve lost their dog go through.
We’ve also partnered with Psycle Interactive, an app development specialist on the product development and partnered their developers with our CX, UX and design team to develop the solution.

Drew> We’re launching in Nashville as a beta test; although we’ve tested continuously throughout the project we’re now really excited to see the product being used by a wider range of users and to look at live data and user feedback to help us steer where we go next.
Along the way, we have tested with users across a variety of methodologies. From paper prototyping and video interviews over a mobile ethnography platform to larger stress-tests of the technology build. Testing and iteration has informed every stage since the very first brainstorm.
Sara> Live data is a huge factor determining where we go next. Whilst we have a really exciting roadmap planned, we’ll be reprioritising and adding to that based on what the data tells us.
Nick> Now we’re live, we’re pairing up our experience specialists with Numbers, our team of analysts to identify what users are telling us about the product and to identify how we optimise and build out new features to respond.
Sara> There wasn’t a “standard” process or solution and we had to think creatively to find a path through and put a plan in place even when things aren’t 100% certain. For example, how do you work out how to test a proof of concept piece of tech without starting on a full app build, or how do you deal with the fact that there isn’t a standard way of scanning an animal’s nose yet?
People often talk about working like a start-up to get this type of work done, but really success lies not just about embracing lean or agile or any other of the things we hear about from startups, but in creating a team dynamic that embraces uncertainty and acknowledges we may not know if this is going to work but that we’re OK with that and we’re going to forge ahead anyway.
Nick> Mars Petcare’s ambition is ending pet homelessness, and the NOSEiD app is a genuine solution to help solve that problem. The goal is to keep making it better to help ensure every lost dog finds its way home.
The NOSEiD app is available for Apple and Android devices in the App Store and Google Play Store.