Marc Maleh, MD, technology and emerging experiences at Huge, on an open-source service with the power to change how companies communicate to their audiences 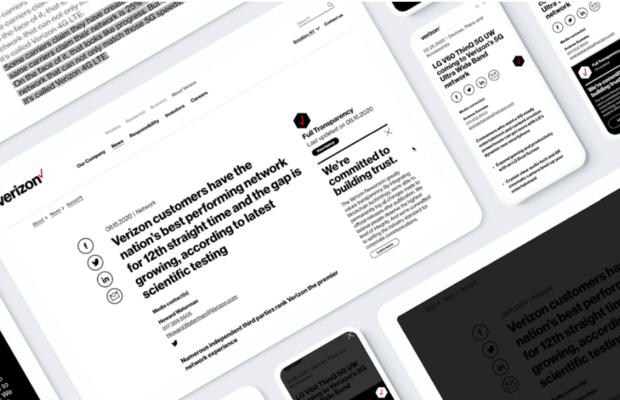 In November 2020 we launched Full Transparency by Verizon. A transparency technology platform built on a public, open-source blockchain service, Full Transparency has the potential to forever change the way companies communicate to their audiences in an open and more transparent way. The system shows a permanent record of Verizon’s corporate news and content changes written to the public blockchain in addition to their owned Content Management System. Revisions and omissions are tracked and shown to the public in a simple and intuitive design system. Emerging research into human perception and misinformation suggests that when online platforms integrate visual cues like this - like badges or symbols to take ‘accuracy stances’ - users become more discerning about what they believe and share.
Full Transparency was intended to kickstart a nationwide conversation around the need for more transparency in corporate newsrooms while simultaneously rebuilding public trust, establishing integrity in online content and setting new benchmarks for others to follow.

The initial brief was fairly open, yet focused on corporate newsroom innovation. We were fortunate enough to have very brave clients who wanted to push the boundaries of how technology could really change the way that they communicated with the public. The brief led us to areas ranging from experiential kinetic sculptures that were impacted by daily news trends to product platforms that used Machine Learning to assess data and trends. However, we were doing a fair amount of research around how the truth was under assault. And because online information can look and sound legitimate, misinformation often hides in plain sight. That’s perhaps why 47% of Americans say it’s difficult to know if the information they receive is true (AP-NORC/USAFacts poll, November 2019). Against this backdrop, we were tasked with communicating Verizon’s core brand pillars of innovation and transparency in a novel, differentiated and unexpected way that also served the public good.

After a three-week ideation sprint with highly cross-disciplinary teams both at the Huge and Verizon side, we met (face-to-face back then) to go over a short list of ideas, ranging from experiential concepts to product platforms that used Machine Learning to assess data and trends. We purposefully embraced the Full Transparency product utilising blockchain because the technology represents a novel, disruptive, and ultimately newsworthy way to serve the public good, while also helping set a standard for others to follow. It also made many of us uncomfortable which frankly was a good thing since we knew that meant we were making something new and innovative. That slight bit of fear kept us up at night but also drove us to launch the product.
While the problem itself wasn’t that hard to ideate around, making it real was quite difficult since it had never been done before. The painstaking process took 16 months from concept to launch, and included a cross-discipline team of product developers, tech experts, visual designers and communications professionals. To fully develop the concept, we held briefings with analysts, journalists, industry organisations and influencers to discuss the implications of Full Transparency, solicit input and generate endorsements. Blockchain is a topic with a fair amount of history and baggage (ie many people still see blockchain just as cryptocurrency and bitcoin) so collectively we did have to ensure that terminology, processes, and expectations were always set. 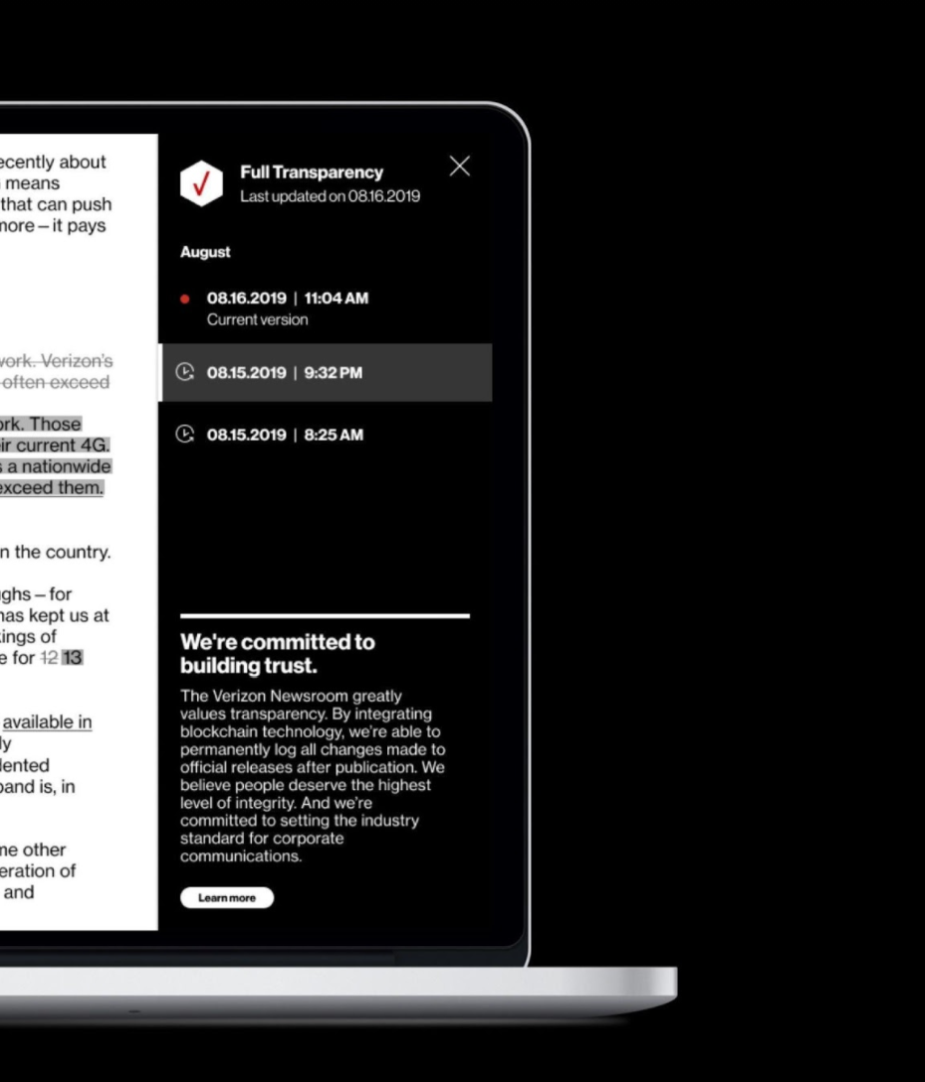 Prototyping is core to what we do across the board not only for never been done before highly complex projects but also for the simple design exercises. They can come in many forms from technical proofs of concept to motion prototypes using frames in Figma, but they are always grounded in what the value of the prototype is. For this work we focused on both a technical prototype that helped us understand the crypto engineering framework and connections to the CMS with our partners at Madhive but also a decoupled visual prototype which allowed us to focus on more of the front-end design and motion elements that we knew we wanted to achieve.
We were thankful that we had most of the skills internally across design, engineering and strategic communications (who played a role from day one concept, through prototype and into launch) but also knew that we did not have specific expertise in the crypto engineering side so we approached Madhive and Adledger to help land not only the execution side but also helped validate and push a lot of our initial thinking around the concept.
Yes, there have been creative executions before using crypto. Everything from ads written on the blockchain to the recent NFT bubble but for many the space of crypto is more focused on the products that you can build on it. For years supply chain organisations, smart contracts and media have been using crypto technologies to help secure their content and process and we wanted to leverage the same theory to content.

We tested A LOT. Both with employees at Huge but also at Verizon. The initial product was first launched just to Huge and Verizon employees so that we could test the design and the core features both from a front-end perspective but also from a content perspective. Verizon employees had to have a deep understanding of the internal systems that were built for them to create content and publish it to the blockchain so that was validated throughout the process well before launch as to cause minimal disruption to their flow.
Very early in the project we had a lengthy discussion around public vs. private blockchain networks and the pros and cons of both. How would our selection impact the design, the engineering, the reception of the product we were launching and the concept in its own right.
The product just launched at the end of 2020, and we are currently assessing next steps. As with any good product launch, it is treated as a living object that needs to be supported and cared for while it grows and evolves. We also knew long term there were other content types that we were interested in supporting since on launch we only supported copy. But through prototyping and feedback we have always looked at video, photography and audio as being the next frontier.
As part of the public launch, we facilitated important discussions with our target audience through a number of virtual events, which saw engagement from over 5,000 industry professionals. Polling results from these events showed significant support for the product and initiative and provided a lot of actionable feedback.
Personally the projects in my career that have kept me up at night - the ones that made me and my clients and teams uncomfortable - are typically the most rewarding and potentially career-defining for some. Yes, they are always the hardest, but isn’t that what we are in this for? I also think the timeliness of this project was very rewarding. By the time we launched, the conversation around misinformation had already reached a fever pitch, coupled with the entire team suddenly working fully remote during Covid made for interesting dynamics.
Since launch we have had more than 800 million media impressions and have started to win a few design and innovation awards but more importantly since the product was engineered in an open source format we have been able to publish a white paper as well as GitHub repository around the product so that other brands can take advantage of the work that we did. For our client, Verizon has made Full Transparency a fixture of its corporate communications strategy, having already published scores of releases on the blockchain, bearing the tell-tale hexagonal Full Transparency logo. Every news release presents a teachable communications moment for our target audiences, while reinforcing Verizon’s status as a communications technology leader and helping to rebuild public trust in online content. In this case, the product really is the message. As an expression of what we call transparency technology, Full Transparency by Verizon is a powerful tool for building narratives we all can believe in.