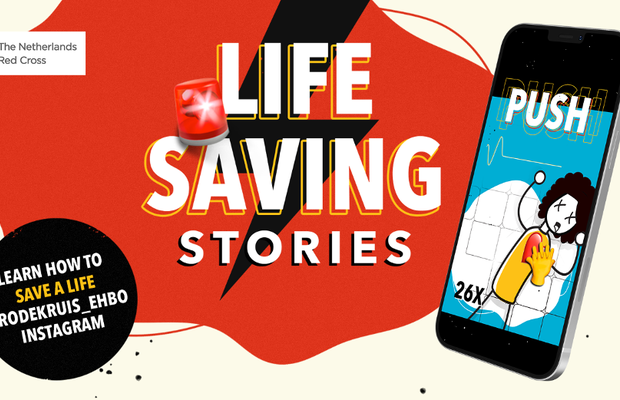 ‘Life Saving Stories’ created by 180 Amsterdam and the Dutch Red Cross is an Instagram game designed to teach the next generation essential CPR skills and empower them to act when it’s needed most.
The game consists of 35 animated Instagram Stories in which someone is resuscitated after a cardiac arrest based on the rhythm the person taps through the slides. By continuing to tap to the next story, the character stays alive.
With 'Life Saving Stories', 180 Amsterdam has, quite literally, tapped into the behaviour of young people on social media and converted it into life-saving actions. By gamifying the serious training, it appeals to the attention of this target group and closes the gap between education and action.

In the Netherlands, about 300 people each week have a cardiac arrest simply going about their daily lives. Research shows that bystanders, and frequently the younger generation, often don't know what to do, with five in six unable to perform CPR or use an AED, a device that can restore the heart rhythm. If both are used, the chance of survival increases by up to 50% if action is taken within six minutes.
The Dutch Red Cross was finding it difficult to reach this younger audience, to teach them the CPR skills that their generation was lacking, but needed.

Encouraging young people to attend courses or watch educational videos didn’t seem like the right approach. Dutch Red Cross needed to reach young people where they were already spending time, where in actual fact, they were already tapping.
Instagram Stories don’t last long. But then neither does the attention span of a young Instagram user. It’s just tap, tap, tap. The campaign sought to ask whether Dutch Red Cross could take this behaviour and use it for something good. To hack young people’s social behaviours to teach them about CPR and turn tapping into training.
The social campaign is designed as both an educational tool and also a way to give bystanders the confidence to act, and act quickly.

These stories were designed to be skipped through, to teach young people CPR one tap at a time. It taught people both the steps they needed to take when performing CPR and also the rhythm, captured through bespoke music created by MassiveMusic. Instead of the Bee Gees’ ‘Stayin’ Alive’, a funky disco track provided the soundtrack to the training.
The campaign was conceived, produced and delivered entirely in-house at 180. The decision was taken to animate the stories, to create a bold, colourful design that would stand out on people’s feeds.
The series of Stories were then saved as a Highlight on the Dutch Red Cross Instagram page, turning the profile into a digital training spot and making the information easily, and rapidly, accessible to all 500 million users of the platform.

‘Life Saving Stories’ launched only a few days after the collapse of the Danish football player Christian Erikssen during a Euro game, after which he received life-saving CPR on the pitch. It became a timely reminder of how vital it is to have CPR skills and training, just in case and the Dutch Red Cross saw a tenfold increase in the number of visitors to its website with people looking to sign up to its CPR training courses.
The Stories were not designed to disappear after one use but to exist long after, to become a resource for the digital generation, whenever they might need it.
The campaign was designed to hack young people’s immediate social behaviours to teach them vital skills. But its legacy is long lasting, and we are extremely proud of the entire team who worked on the brief, from start to finish. From the in-house production to account handling and design, this work was championed by a team who believed strongly in ensuring that everyone receives life-saving CPR training.