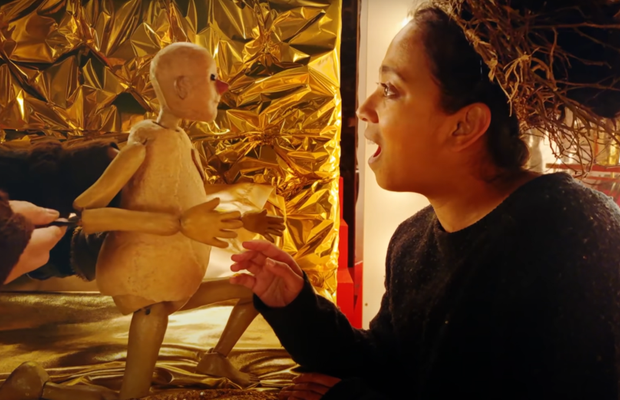 Filmed at the medieval Restormel Castle in Cornwall, one of the most remarkable castles in Britain, the 20-minute short is a beautifully crafted and wonderfully weird film told through the cinematic storytelling vision of Wright, capturing the power of magic, the magic of love, and the right to choose who to give your heart to.

“My parents ran and founded the first dedicated puppet theatre in the UK, and I’ve never made a film with any puppets in it so I thought this was the perfect opportunity to return to those roots and explore what that might be like,” said Wright.

“We’ve had great experimental fun making it, working with shadow play, puppetry and the simplest of moving lights” added McGarvey. “It’s very much back to the filmmaking that I started off doing with a Super 8.”

Wright was afforded complete creative control of the project, allowing the filmmaker to fully express his creative inventiveness, “My only piece of advice for all fledgling filmmakers is that it’s the imagination that is important” said Wright, “everything else should be at the service of the imagination. Imagination is key.”

Samsung partnered with RSA on the film, with the project being shot entirely on a Samsung Galaxy device, adding even more intrigue to the impressive production values.

Released ahead of Wright’s feature Cyrano (Haley Bennett, Peter Dinklage, Ben Mendelsohn), ‘Princess & Peppernose’ is now available to watch in full, with an exclusive behind the scenes featurette from director Jacob Hopewell.