The short film sees Hardy Caprio, who has spent lockdown working on his debut album, share how gaming has unlocked and fuelled his creativity and will be featured as part of the opening package for the BAFTA Games Awards ceremony 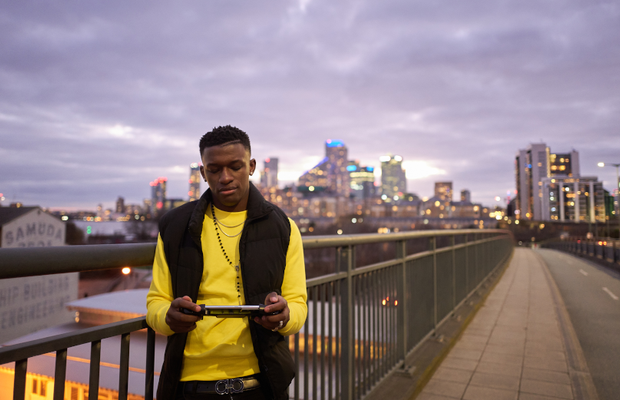 The short film is screened just days before voting closes for the much-anticipated EE Game of the Year Award and will be featured as part of the opening package for the BAFTA Games Awards ceremony. The new award is the only category at the BAFTA Games Awards to be voted for by the global community of games fans, with the public vote open until 5pm, 23rd March 2021 at ee.co.uk/BAFTAGames.

The rapper, who racks up more than two million streams per month, shows off his versatility as the star of the short film, sharing how he brings his competitive nature, intensity and drive from the music industry to every game he plays – whether he’s at home or on the move. The short film tells how gaming has allowed Hardy Caprio to keep fresh when he’s touring and entertained during lockdown, keeping him connected with friends, and as he works on new material, even providing respite and unlocking creativity for the songs he writes.

EE Film Stories: BAFTA Games depicts a familiar scene from our pre-lockdown life, two friends bringing their all to their favourite Xbox game. Caprio opens with “Yo, it’s your boy Hardy Caprio. You probably know me from the music I make but I can be a bit of a gamer as well”.

We see Hardy move outdoors, with the London skyline in shot, as he’s seen gaming on the go on his Samsung Galaxy Z Fold2 5G handset, he adds: “5G tech has really changed the way I play. Means I can game with my friends on the move, on tour, or when I’m working late nights at the studio”.

The long-time gamer harks back to his early game memories growing-up, “I used to love FIFA, [Dragon Ball Z:] Budokai 3, even that Sonic [Classic] Heroes. All them sort of games”.

Arriving at the iconic Lightship 95 studio, Hardy can be seen warming-up in front of a microphone. A familiar setting for the 24-year old, who has spent the several months recording new music, aiming to top the charts again soon. He adds: “Escapism is so important – but on the other hand, I’m also really competitive. You know, I just love a challenge. And I love beating people at their favourite game”.

On how gaming relieves the pressures during production, he adds: “It’s so important to have a release and a break from work. You know, gaming definitely just helps keep fresh and in a creative headspace for when I’m just trying to write songs”.

He adds: “As a creative myself, I have a real respect for the work and art that goes into making a game”; before urging the gaming community to “Have your say” and vote for the EE Game of the Year Award, the only category voted for by the fans.

The short film is released ahead of the artist’s much-anticipated debut album, due out this Summer, which focuses on themes of self-awareness and self-acceptance. Hardy Caprio added: “In music, at least in rap, there can be a lot of pressure to be someone you’re not. It’s my first album, so I've experimented with different styles but made sure to not lose sight of what makes music fun to me. As long as you have fun listening to me, I’m good.”

When speaking exclusively about the EE Film Stories film, UK rapper, songwriter, record producer, and long-time gamer, Hardy Caprio said: “Over the past few months, I’ve been working on new music. It’s intense work, so I take 20 minutes, even an hour if I’m onto a good thing, just to play a game. Like music, when I put on my headset, gaming just takes me away.

“There are loads of parallels between music and gaming - probably why they call it the music game. I don’t mind a cheeky gaming reference in my music too, like the #Hollywood 3 Freestyle, ‘I was 16 when I done shh shh and I made squares hit like Budokai 3’. I even travel with my portable console when I’m on tour. It keeps me entertained, no doubt. But it also keeps me connected to people back home. Even when I’m on the move, me and my friends are still running through our favourite games. Then, during the downtime, mobile gaming keeps my days interesting.”

Pete Jeavons, marketing communications director at EE comments: “For so many, gaming has provided entertainment, escapism and connection, and as Hardy shared with us, it can fuel creativity too. We’re thrilled to be sharing Hardy’s story, and for this year’s BAFTA Games Awards give the gaming community a chance to have their say too through the EE Game of the Year Award. For the first time, fans have the power to vote for their favourite game. As the UK’s number one network for gaming, we understand the importance of gaming, which is why our reliable network is focused on providing the performance for gaming, so you can game on the go”.

The EE Game of the Year Award is the only category at the BAFTA Games Awards to be voted for by the public. Voting closes 5pm, 23rd March 2021 at ee.co.uk/BAFTAGames

The Work That Made Me: Chris Chung