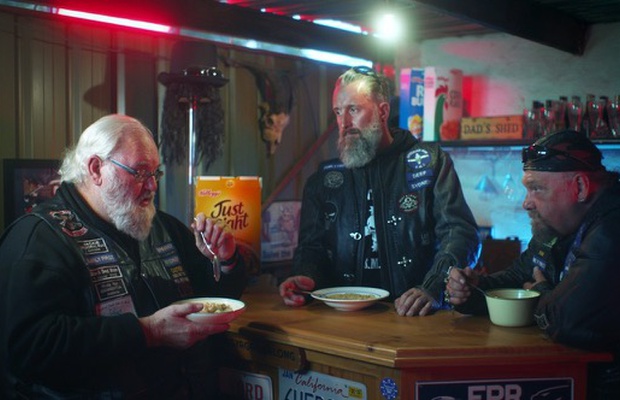 What do a mermaid, a bikie, a crane-driver, and a State gymnastics team all have in common? They all love eating a perfect bowl of Kellogg's cereal.


The documentary-style ads feature ten groups of real families and friends, all genuine Kellogg's fans, debating their version of perfect. The unscripted testimonials show the many mysterious and wonderful ways Australians enjoy their cereal - from Dane, who works on a crane and eats his Just Right while watching the city wake 30 storeys up, to Colin who's been a fan of Corn Flakes for 65 years, and Annie Mation, a drag queen who loves her Rice Bubbles after doing a late-night show.  All true stories that are irreverent and, at times, touching.

The cast was found by reality TV casting agent, Lucky Price, of The Block fame, who was engaged by J. Walter Thompson late last year to take to the street and social media to find true Kellogg's fans who would allow a crew into their homes - and bowls.

Says Lucky: "To have the opportunity to apply a television approach to casting an advertising campaign is really exciting. From bikers to baristas, school teachers to surfers, you name it, we saw it. The quality of our submissions was incredible, the final cast was whittled down from almost seven thousand respondents."


Says Sinead Roarty, creative director, J Walter Thompson, Sydney: "We wanted to show the genuine love Australians have for the brand, yet My Perfect Bowl isn't just a campaign about cereal. It's a portrait of contemporary Australia. Our goal was to not only find what unites and connects us, but to also celebrate how different and diverse we are."

She said the campaign also aims to get people across the nation talking about their kind of perfect bowl, by encouraging fans to enter the debate using the hashtag #perfectbowl.

Says Tamara Howe, marketing director, Australia and New Zealand, Kellogg's: "Everyone has their own way of enjoying their Kellogg's cereal. Whether it's the topping they put on or the time of day they have it, it's their perfect bowl - and why mess with perfection? We wanted to ignite debate amongst fans while celebrating the simple, universal joy of having a perfect bowl of one of Australia's most loved cereals."

My Perfect Bowl is an extension of a global campaign which kicked off in the UK last year. The 60-second TV is supported by a suite of 15-second spots and longer-form online content, social and packaging.