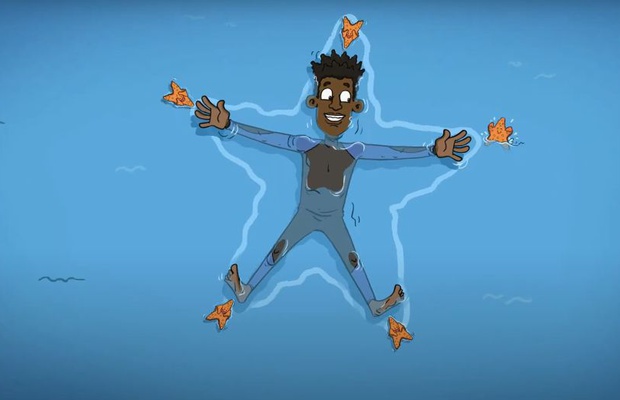 Every year, around 140 people lose their lives at the UK and Irish coasts. This year in particular, owing to international travel restrictions and a greater reluctance to holiday abroad, we expect millions more people to visit the coast between May and September. In order to ensure these families keep safe when visiting the coast, the Royal National Lifeboat Institution (RNLI) has debuted an animated sing-along campaign to educate children on water safety.
RNLI’s internal agency worked closely with independent creative and production agency Five by Five on the ‘Seaside Safety Song’, which sees Sandy the lifeguard and her friends offer advice on how to stay safe on the coast. The song recommends choosing a lifeguarded beach, swimming between the flags, and floating like a starfish if you get in trouble in the water, as colourful animation plays out the scenes and adds a lighthearted element to the PSA.
Five by Five were approached by RNLI to help turn around the production and management of the campaign at a fast pace, supplementing the client’s internal agency who had drafted the initial storyboards and scripts. The team was briefed in May and had six weeks to complete the project, ensuring it could air in time for the summer holidays. Five by Five immediately got to work after receiving the brief, leveraging their capabilities in project management and client communication to ensure the process ran smoothly and they delivered on time and budget.
Knowing that the animation style was vital to the film’s impact, Five by Five also worked to secure an animation studio that could deliver a fun and engaging aesthetic for a young target audience. Providing this attention-grabbing, easily understandable, and memorable style was WONKY Films, capable of delivering perfectly-pitched animation within the tight time frame.
Sarah Shaw, client director at Five by Five, comments: “Our role was to help problem solve, manage, and deliver a beautiful ad at a pace - helping to turn RNLI’s vision into a reality. Their creative team had drafted the storyboards and scripts, so it was a real case of us working as an extension of their team, acting as the creative mouthpiece for their brilliant ideas. Working closely with WONKY Films, we devised a solution that delivered something fun, engaging, and relevant - and most importantly, on time!”
The ‘Seaside Safety Song’ is part of RNLI’s Water Safety communication strategy, supporting the charity’s vision ‘To Save Every One’ through national campaign messaging and sharing advice at a local level. The campaign will run from the 16th July to 5th September across a number of major television channels, including Sky, ITV, Nickelodeon, and MTV.