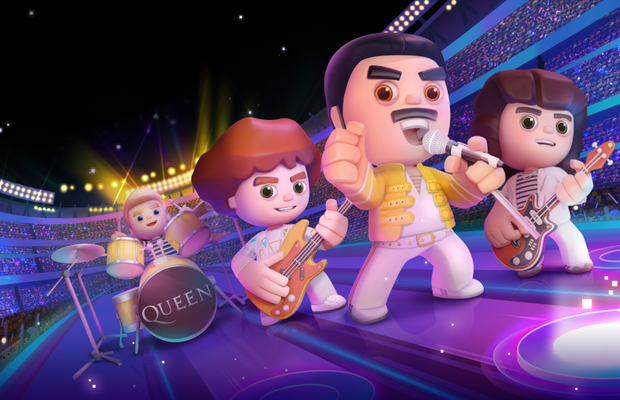 Although live music has been put on hold due to the pandemic, the legendary rock group Queen has come up with a safe alternative: Queen: Rock Tour!

The band’s first-ever official game for mobile devices was created in partnership with Universal Music Group and Hollywood Records and allows Queen fans to experience their greatest hits like never before.

A new generation of Queen fans

Whether you’re a fan or not, everyone has heard at least one song from Queen. What is the real game-changer for the band? The release of their official movie Bohemian Rhapsody in 2018, making its way to the second-best debut of all time for a music biopic.

Part of what drove the movie to such success was that a younger and new audience for the band came out to see the film. According to Hollywood Report, 17% of ticket buyers aged 18-24, while 26% of the audience was between the ages 25 and 44, a new wave of Queen fans coming from new generations who helped Freddy Mercury’s biopic to reach a box office win.

The opportunity to extend the engagement beyond the movie

With huge traction on the music band since the movie release, comes a challenge: how to extend the engagement with this new audience beyond the movie? What does this audience like and resonates with beyond movies and music?

Working together with Universal Music Group and Hollywood Records, Gameloft tried to answer the question of hooking on mobile a young audience that does not necessarily know Queen or just discovered the band through the movie.

And with its 20-year experience in mobile gaming, Gameloft are naturally inclined towards a mobile gaming experience. Also, figures don’t lie: younger generations like to talk about gaming and 97% of 18-29 do own a smartphone.

The first and only Queen game on mobile, Queen: Rock Tour, retraces the band’s life, history and progress throughout the years and builds upon the movie’s success and its new audience. It was developed around one vision: bringing the music game genre back, by modernizing it and giving a timeless look to Queen’s band in order to appeal to this new generation of players.

Queen: Rock Tour is a mobile experience based on four pillars. Players are able to play, engage, discover, and customise.

Play - Discover the full band’s discography by actually playing it

Queen: Rock Tour is a rhythm game where users have the feeling they’re creating the music themselves by just tapping on a mobile screen. Gameloft made the choice to go against the casual gaming trend by having a landscape orientation, making the game more challenging.

Each song within the game has been broken down to have each instrument as a separate track, meaning if you fail to properly hit a note, one of the instruments will mute and you will hear a version of a song you have never heard before. This serves as a perfect incentive for Queen fans not to miss their play session if they don’t want to hear a distorted song that would make Freddy Mercury spin in his grave.

Gameloft's creative team developed a happy and comforting visual style to appeal to this new younger target audience, giving a timeless look to the band members. To stay relevant and authentic to the fans, we devoted enormous attention to characters’ animations, history and small details: this took a year of research and a lot of photos and videos references from the band’s live concerts to capture the exact same style and spirit of their costumes and movements on stage.

Players relieve Queen’s historical career by participating in the key moments of their greatest performances. To keep fans engaged, Gameloft built a digital coin system in-game where players go on tours and collect coins as they deliver a great performance on stage. The game currency allows them to release new albums and therefore new venues, as well as special outfits & moves to spice up their live concerts.

Through a linear progression, users start the game by playing early classic Queen songs from 1973 and slowly move along to the most famous hits. Anytime a player unlocks a new Queen period or venue, he will have access to exclusive content directly taken from the band archives, keeping him engaged and incentivized to rock his live music performances in the game.

Customise - Players create and become their own members of the band

Gameloft analysed and recreated the iconic costumes and choreographic movements of the band for players to select the ones they prefer so they can perform their very own unique live show on stage! More than forty outfits, hairstyles, accessories & moves can be acquired with in-game currency.

Queen: Rock Tour was awarded the number one hot game (all genres combined) by Touch Arcade with more than half a million downloads in only two weeks. Gameloft also aimed for the right audience: 65% of downloads are from users aged 16-34 and 23% aged 35-54. What matters most though, is that fans around the world enjoyed it by sharing their enthusiasm and uploading their playing sessions on social networks.

A great example showing how gaming can fit a brand objective and resonates with an audience that heavily relies on digital and mobile. The good news is, gaming can work well with every type of business objective and industry, whether it’s music or healthcare. The question is: why are you not into gaming already?

Start by chatting with us here. Have a look at our creative team presenting Queen: Rock Tour