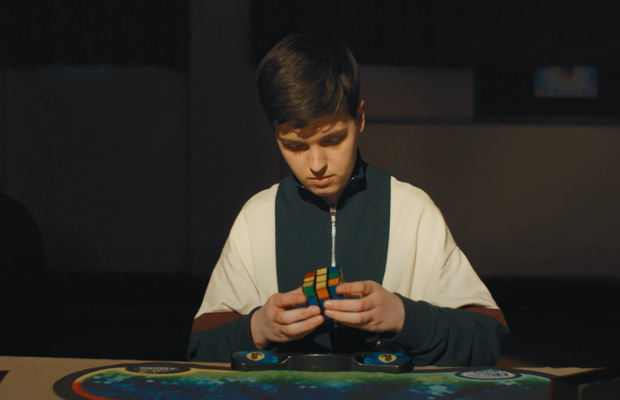 The story of a young girl learning how to master a Rubik’s Cube doesn’t immediately shout ‘science fiction’ - but that’s not the case in Ross from Friends’ latest promo. Accompanying the electronic DJ’s new single ‘The Daisy’, the promo blends a reverence for speed-cubing competitions and a bittersweet twist worthy of a sci-fi classic - and was recently selected as a Vimeo Staff Pick.
Directed by Ruda Santos, represented by Ballistic – Great Guns’ label for emerging talent, the promo transports us through a trippy time-warp to an unassuming park, where a young girl discovers a Rubik’s Cube and a timer on a bench. Her passion for ‘speed-cubing’ ignited, we then follow her on a journey where she works to master her skills, ending up in a speed-cubing competition and battling through all the step countdowns to reach her goal in time. As she wins the competition, however, viewers are confronted with a surreal twist. It’s revealed that the girl is trapped in a never-ending time loop, and must now deliver her cube and timer to her past self.
After Ross from Friends suggested the concept of a kid working through a speed-cubing competition, Ruda Santos chose to add a conceptual layer to the narrative, making the story feel fresh and enticing - and giving the cube itself a magical quality. Blending an admiration for speed-cubing with the unexpected ending, Ruda also employed 3D animated sequences to bookend the film and reinforce the sci-fi elements. In order to capture authentic, realistic performances, he also chose to cast real Rubik’s Cubers in the promo, including Katie Mouchan-Davies as the protagonist.
Ruda Santos comments: “I’ve always thought the cube was a mysterious and fantastical object - so the idea to play with some sci-fi elements seemed very fitting and came naturally to me in the writing process. Having some of the UK’s best speed-cubers performing in the video also helped us bring the vision to life. Ultimately, we wanted the promo to function as both an ode to speed-cubing as a sport, and a thrilling and engaging short piece of its own.”

Per Diems are in the Envelope: Part 1