Campaign developed by Host/Havas Sydney and produced by AIRBAG 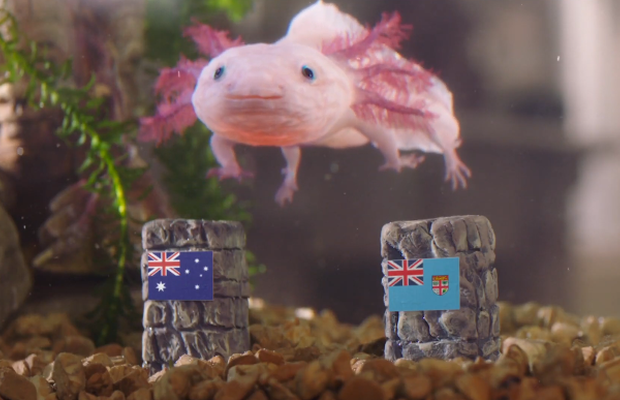 In 2010, a psychic octopus named Paul shot to fame by correctly predicting the result of every game of Germany’s FIFA World Cup campaign. In 2019, there is a new oracle animal on the scene – Kayo’s Rugby World Cup 2019 predicting axolotl, Owen, who is the star of Kayo’s latest campaign via Host/Havas.

Kayo is set to kick off its Rugby World Cup marketing campaign next week and, following the success of the Cricket World Cup TVC, the campaign will be led by a new TVC starring Kayo’s very own ‘axol-oracle’.

Says Julian Ogrin, CEO, Kayo: “The Rugby World Cup is one of the biggest sporting events in the world, providing the perfect opportunity to demonstrate how people from all walks of life can get more out of their favourite sport with Kayo.

“This campaign allows us to continue to grow awareness of Kayo, as well as build deeper knowledge about our offering and encourage customers to enjoy the ultimate World Cup experience with the additional features exclusive to Kayo.”

The TVC will feature Owen, the loveable psychic amphibian, whose fish tank has been conveniently positioned in front of the family TV, giving him the perfect view of all Kayo’s rugby coverage and allowing him to correctly predict the outcomes of World Cup games.

Owen is just one example highlighting that no matter who you are, you’ll get more out of the Rugby World Cup with Kayo. Kayo will have every game of the World Cup LIVE and On Demand, instantly streamed to your favourite device. In addition, Kayo Minis will be available following the conclusion of every game, along with live stats and key moments accessible as the action unfolds.

Owen will be brought to life through a Facebook Messenger Chatbot, where he will become every rugby fans ultimate World Cup companion. Within Messenger, Owen will share his predictions, insights about teams and provide fans with useful rugby updates, garnered from watching so much rugby on Kayo from his conveniently positioned tank. The “Owen Predicts” bot will be live on 12 September.

Kayo’s integrated campaign will be live from Thursday, 12 September and in addition to the TVC will include digital video, radio, press, social and digital performance marketing.

Kayo partnered with Host/Havas, AIRBAG, Alt.VFX and Song Zu on the TVC, which will run heavily on free-to-air television and digital video throughout the Rugby World Cup. Kayo partnered with OnMsg on the Facebook Messenger Chatbot.

Catch every game of the 2019 Rugby World Cup LIVE and On Demand plus more than 50 other sports by signing up now at www.kayosports.com.au. Start your 14-day free trial today and start streaming instantly.