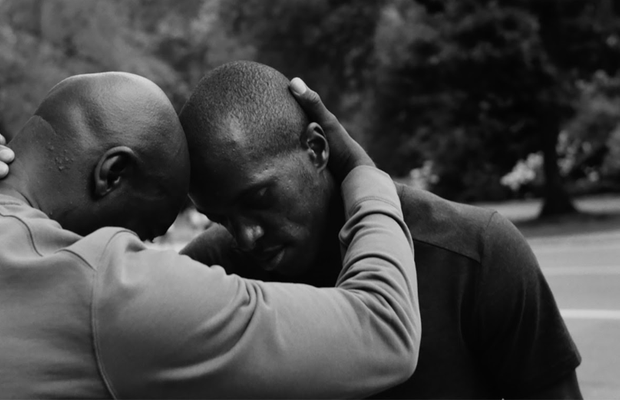 Since contracting Kawasaki disease at 15 months-old and losing his sight by the time he was a teenager, Paralympic champion and 100-meter world record holder, David Brown, has not seen the lane lines, starting blocks or the curves of the track. Bound by a four-inch tether, David and his running guide, Jerome Avery, have formed a unique partnership that has endured for more than seven years, during which Brown became a gold medallist, two-time World Champion, world record breaker and the first totally blind athlete to run 100m in under 11 seconds.

Now – as David returns to defend his title at the 2020 Tokyo Paralympics – their  inspiring story of companionship is being told in an original branded documentary, Untethered, presented by Swiss sportswear company On. Written by award-winning creative director Andy Fackrell and directed by Little Minx’s Andrew Dosunmu (Mother of George, Where is Kyra? and Netflix’s soon-to-be-released Beauty), the 21-minute short encompasses the extraordinary ambition and courage of all Paralympic athletes – seen through the prism of one man’s drive to succeed.

“One of the main reasons I made this film is to dispel the notion that disabled people have a less full life than the norm,” says writer Andy Fackrell. “In David’s case, he refuses to let blindness slow him down in his dream to be an even faster sprinter, and to experience all that life has to offer. This film is about reframing disability in a positive light.”

Filmed on location at some of New York’s most iconic and cultural landmarks, ‘Untethered’ mixes reality and documentary to stunning effect. As much an homage to the New York skyline and cityscape as a moving tale of trust and enduring friendship, the film explores David's youth and the impact of a life-changing disease on his sporting ambitions, while also subtly tracing his changing relationship with his running guide.

Sparsely yet poetically shot in black and white, the film’s monochrome palette is matched with an evocative score by BAFTA award-winning composer Peter Raeburn. Following the duo from the Staten Island ferry to Central Park, Coney Island and the suburbs of the Big Apple, Andy and Andrew capture moments of kinship and tension with honesty and authenticity.

Alongside appearances by David’s early mentors and his mother, there are also unexpected cameos by two of his favourite entertainers: J.B. Smoove, of Curb Your Enthusiasm fame, and The Roots’ Black Thought. Bringing an extra dimension to the black-and-white documentary, they share candid conversations about parallel perspectives in the atmospheric settings of Coney Island’s boardwalk and Harlem’s iconic Apollo Theatre.

In perhaps the most surprising narrative twist of the film – revealing the unconventional approach taken by the brand and creative team - a coda to the closing scene reveals that, after seven years of training and competing together on the world stage, Jerome will be replaced by a new running guide at this year’s Olympic Games in Tokyo, leaving David ‘untethered’ from his long-time companion for the first time. “From a film about two brothers in arms preparing for Tokyo to defend their gold medal and world record, I was witnessing the end of an era, maybe even a friendship. I felt privileged to be able to capture this rawness of emotion between two wonderful athletes and people,” says Andy.

“Untethered demonstrates the true meaning of unwavering human spirit,” says Feliciano Robayna, head of sports marketing at On. “This is a story about conviction and a shared belief in being able to let go of all fears when deprived of sight and have faith in another human being.” Echoing the growing trend for out-of-the-ordinary choices in brand storytelling, the film exemplifies On’s ‘Dream On’ philosophy, which encourages us to take the path less explored in order to achieve the ultimate reward. More than just a beautifully crafted piece of content marking a historic sporting event, it’s a bold statement that aims to change attitudes towards disability for good. “This film is about the athletes’ mindset, and their individual takes on the power of the human spirit to… Dream On, no matter the setbacks or obstacles in their way,” says Feliciano.

Andy Fackrell concludes: “The film touches on perseverance, trust, and unflinching self belief - a lot of big themes.  At times in our life we need to put trust in other people to pull us forward, but trust in ourselves is ultimately what steers us all. As Black Thought says: ‘It ain’t the setback, it’s the get back.’”