Scaling Creativity: How STADIUM Is Changing The Game

LBB goes behind the scenes at the LA and London based production company to find out how its dynamic, scalable model is challenging preconceptions 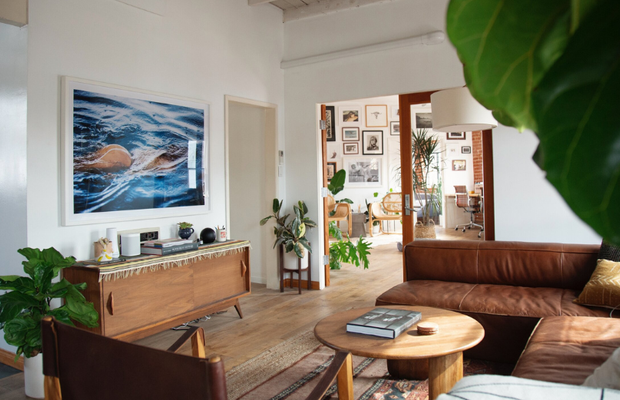 From his office, a stone’s throw from the sun-kissed Venice shoreline in LA, STADIUM Founder Samy Mosher is reflecting on his company’s journey so far. “Those humble beginnings underpin everything we do now, right down to our ethos and our culture. We may have left those days behind, but we’re keeping that attitude with us!’.
Having started life operating out of a garage, STADIUM’s staff are in no rush to forget those less auspicious origins. “The office may be bigger, the team may have grown, but the perspective of the company still remains one of humility”, explains Eric Maldin, a partner and director at STADIUM. “That feeds into our ability to be dynamic, nimble, and the potential to scale projects up and down on a whim”.
Helping with that is Mickey Voak and Giorgio Bruni, STADIUM’s EP and CD, respectively, based in London. “Joining the STADIUM team was hugely organic, as with so much else we do”, recalls Mickey. “Having capabilities in the States and here in London offers this enormous turnkey solution for big brands looking to shoot globally but stay lean in their approach”.
"With the company now working alongside brands and agencies such as Nike, Samsung, and Wieden+Kennedy, their humble and dynamic philosophy now finds itself regularly applied to industry-leading productions with the highest-profile clients STADIUM could ask for. "We keep our feet on the ground”, explains Executive Producer Michael Bergin. “And that’s easy to do given we’re often working with the same small crews we were with when we began. So even on the largest productions, the whole process can still feel very small in spirit."

STADIUM’s nimble culture lends itself to what could be described as the company’s USP, the ability to deliver quality no matter the scale of production. “You find that most companies are capable of scaling up for the big productions, and of course we’re used to doing that for the larger projects we get awarded”, notes Samy. “But on the other hand, not all companies can scale down for smaller projects which is where we feel we have a unique place in the market”.
“With the way in which advertising spends are handled nowadays and the number of platforms all this content can exist on, we see huge fluctuations when it comes to the scope of each project”, explains Eric. “Our entire roster and company ethos depends on us being able to take on different roles and responsibilities so when a small social project comes up that only involves a handful of people creating social content we feel we are always able to welcome that work in the doors with open arms”.
For STADIUM, the advantage of their small team and agile philosophy is that the company doesn’t have to contend with the kind of overheads which burden the traditional production process. For any agency or brand looking to experiment with smaller-scale projects without compromising on quality, it’s an attractive model.
Recently, that model (as well as STADIUM’s dynamic approach) has been tested thanks to the Coronavirus pandemic. “Being a non-union partner, we were able to adapt fairly quickly to the new set of challenges the virus presented”, says Samy. “The result was our Shoot Small initiative, which we hope gives confidence to anyone looking to produce amazing work with us while we move through these unprecedented times”.
The 18-page handbook (available here) outlines filming techniques such as having zero crew on-set, instant feedback whilst filming remotely, and a stable of Covid-safe locations. Additionally, the document outlines steps that can be taken on-set, where necessary, to limit risk.

An example of STADIUM’s unique approach is well-represented through their 'Makena: Dream Further’ work for Nike, directed by Monroe Alvarez.
“I feel like this project was something of a benchmark for the new-age approach to advertising”, says Michael. “Wieden + Kennedy approached us with an opportunity to create a film showcasing the story of the campaign from a unique perspective. We pitched them on the notion that this was not a behind the scenes film approach but what we called an ‘Elevated Editorial Campaign’, where a nimble crew was armed with the goal of capturing the campaign’s spirit while Prettybird’s Francois Rousselet was tasked with directing the broadcast spot”.
The result was a brilliant film that takes audiences on an authentic and heartfelt journey through the production of the film. “The work we created ended up being one of the most-watched pieces of content on Nike’s main Instagram page”, recalls Samy, “the likes were soaring into the millions in the first 24 hours!”.
For STADIUM, the project also shows how their model can work in harmony alongside traditional campaigns, taking them in a different and exciting direction. “I’m enormously proud of the work we did there”, says Eric. “It shows just what we can bring to the table, and how much audiences enjoy and value that”.

For the STADIUM team, all of this work is underpinned, and inspired, by their individual passions for creative expression. “We’re always looking to foster creativity in everything we do, whether that be our work or more widely in our communities”, explains Mickey. “Finding and mentoring young talent is what inspires us to keep moving forward, and we absolutely encourage all of our talent (on the roster and off) to keep developing their short films, music video and documentary ideas. Anything that keeps the flame of creativity alive is good to us.  We will back the idea and the person if the idea is strong enough”.
“Staying inspired and creatively hungry is essential to what we want to keep doing”, agrees Samy. “Our doors are always open to all artists and producers who want to collaborate creatively or even just bounce ideas. Ultimately, we’re all lucky enough to be working with our friends, and with the freedom to express ourselves creatively. I think I speak for all of us when I say we’re never going to take that for granted”.
At a time of looming uncertainty for the industry, STADIUM has hit on a model that combines creativity and practicality to marvellous effect. Amidst a climate of insecurity, the company’s versatile and adaptable approach may well have found its moment.