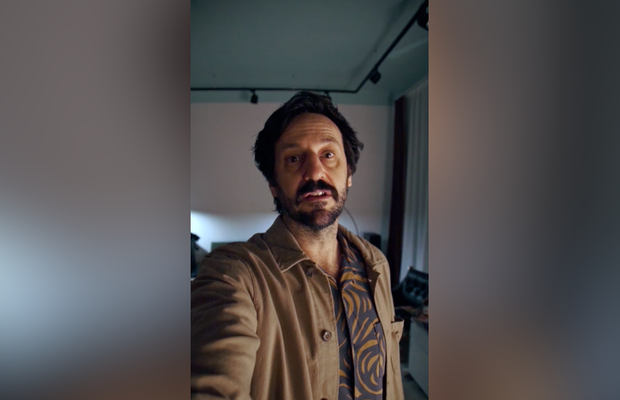 Have you ever heard your own voice on an answering machine and were convinced that this strange sounding person could not possibly be you?

​Most of the time, we get to avoid these moments, where we’re directly confronted with ourselves, especially the less flattering parts – we don’t know how weird our hair looks on the back of our head, how deranged we look when we laugh, get angry or come. We keep busy and entertained, we spend most of our time around colleagues or friends, our very selves for the most part as unexamined as that silly laugh, or the awkward sneeze. Now Covid has given a lot of people the unwanted time to have a long hard look at themselves. Many didn’t like what they saw and that goes beyond appearances. Have you been telling yourself for years how you’d get fit, write a book, do your taxes or go through that pile of old mail if only you had time? Well, did you? We bet you didn’t. Neither did James, the protagonist of this curious short who is confronted with himself in a way most of us can't even imagine. It is truly CONFRONTING.

​Of course, the genre that filmmaker Scott Pickett chose for this unique and unsettling look at one of us, is worth noting as well. We’ve been celebrating the internet as a tool for democracy, most recently we’ve decried it to be its very doom, yet for the most part, people have been using it as a tool to feed their craving for self-promotion and attention. Beyond the aesthetics of Facebook and Instagram, some of the unboxing and tutorial videos on YouTube offer a peak into the minds and homes of some of the stranger people out there in their pursuit of that serotonin rush that being watched, liked or commented on has been proven to provide us with. It’s interesting. And a bit sad. And a reflection of the narcissism that exists in all of us, whether we like it or not. James, our protagonist here, simply takes this whole narcissistic bit a whole lot further and like narcissus, well, you should look that up or watch The Unboxing Video.

​You can find Scott as a director with Scoundrel- Australia, Division- France, Pumpkin Films- Switzerland and Soup.Film - Germany.​