Screwfix celebrates eighth year of football sponsorship with an expanded platform of idents and activations, created in collaboration with independent creative and production agency Five by Five 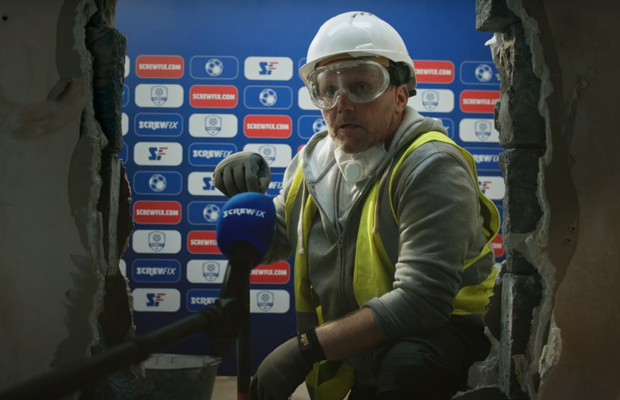 As the 2021/22 football season commences, Screwfix is entering its eighth year as a football sponsor on Sky Sports across the UK and Ireland. As an extra touch this year, the retailer will also be adding Soccer AM to its sponsorship line-up alongside Sky Sports, Quest, and S4C, offering a nine-month campaign full of humour, positivity, and a real celebration of the sport.
Working once more with long-time collaborators, Five by Five and media agency Wavemaker, Screwfix will continue to sponsor Sky Sports’ broadcast and digital coverage of the English Football League (EFL), Scottish Professional Football League (SPFL), and the Carabao Cup - comprising over 200 live games across the season. This includes 13 different idents broadcast throughout the coverage, as well as owned and earned media and instore.
Whilst last year’s sponsorship focused on enjoying football at home during the pandemic, this year’s idents focus on returning to some sense of normality, and celebrating a job well done for both the audience and the players. The light-hearted spots begin with real-life scenarios of tradespeople finishing their work, before a sponsorship board slides into the background of the scene, and a voice-over asks them about the work they’ve just completed - reminiscent of a post-match interview.
Five by Five worked with Screwfix to devise the concept for the new series of idents, as well as CHIEF who managed the production for the shoot.
Screwfix’s sponsorship also extends to the Soccer AM Pro AM Challenge, the popular in-show segment that sees guests’ team up in their attempt to win money for charity. The Soccer AM sponsorship will run until the 2021/22 season in May 2022 across Sky Sports’ broadcast and social media platforms, including YouTube, Facebook, and Instagram.
Andy Mancuso, creative director at Five by Five comments: “This year’s idents are all about connecting the football world with tradespeople and DIYers and celebrating a job well done. It was great to collaborate once more with Screwfix on this sponsorship, and craft some feel-good idents that really captured the spirit of the brand.”
Jack Wallace, director of marketing at Screwfix, adds: “As the Official Partner of Sky Sports Football, we wanted to create an idea that would provide a real connection between football and our customers. Our idents for the 2021/22 season are all about ‘A Job Well Done’, they bring fun and personality to the partnership and it’s been fantastic collaborating with our creative agency.”

How Screwfix Supercharged Black Friday With Its Lightning 2021 Campaign

Five by Five on Their New Gold EcoVadis Rating, and Why Carbon Neutrality ‘Isn’t Enough’

Strength and Clarity: Why Following Crowds Will Leave You Lost In The Noise

Play On: How Gaming Brands Can Inform a Next-Gen Approach to Advertising