The EE Film Stories: BAFTA Scotland, commissioned for this year’s BAFTA Scotland Awards live-stream, tells an optimistic story of how technology is keeping the film and TV industry connected throughout change 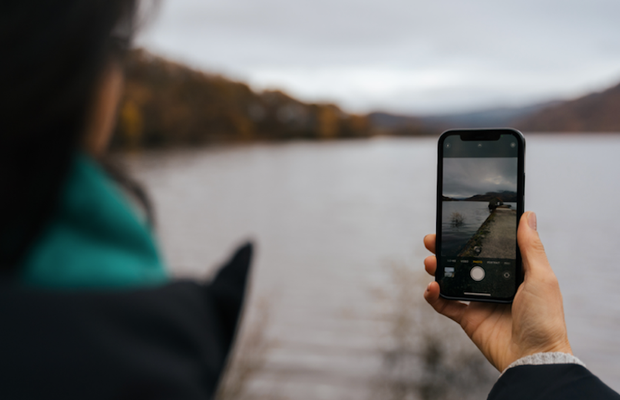 Last night, audiences from across the globe tuned in live to watch the annual British Academy Scotland Awards; a celebration of the very best in film, games and television produced in Scotland over the last year.

The event, which was hosted by broadcaster Edith Bowman, set the scene by opening with the exclusive short film, EE Film Stories: BAFTA Scotland, which gave viewers at home a taste of the natural beauty of Scotland, through the eyes and the 5G phone of one of the nation’s most respected supervising location scouts, Lloret MacKenna Dunn.

In the film, MacKenna Dunn, who is responsible for discovering some of the now-iconic locations for productions including T2 Trainspotting, Patrick Melrose, Outlaw King, Stag, World War Z, The Jacket and Doomsday, transports viewers through a diverse terrain of locations. Each setting all within 2-hours from Glasgow – including the majestic Falls of Falloch; Loch Katrine, featured in Doomsday, 39 Steps, What We Did on our Holiday; and Luss Estates, the majestic backdrop in The Eagle, Outlaw King, Falling for Figaro and Stag.

As a supervising location manager, MacKenna Dunn is responsible for helping to bring to life the vision of many – from the director and creative producer, all the way to the costume and make-up artists. As such, she and her team are in constant communication with various departments, as well as each other. The EE Film Stories: BAFTA Scotland highlight how new technology, such as EE’s latest 5G network, is supporting, and will continue to support and enhance the lives of those working in the Scottish film and TV industry.

The film opens as MacKenna Dunn captures the majestic view over Loch Lomond on her 5G phone. Cutting away, the audience sees the winding roads of the Duke’s Pass before the scene opens at Loch Katrine.

Here viewers get the first glimpse of MacKenna Dunn’s colleagues, location scout Amelia Jacobsen and location assistant Evie Harkins, who, with MacKenna Dunn, are in pursuit of the perfect location. Capturing and sharing their latest discoveries on the go.

The viewer is transported again, now along the Duke’s Pass, as MacKenna Dunn explains “It’s my job to find locations in a film script and help bring the director’s vision to life”. The audience see a figure standing by (the cut) Loch Katrine photographing the idyllic setting in high-resolution on their phone, before the drone footage once again draws attention away to the next destination.

Travelling off-road by vehicle we hear MacKenna Dunn say: “I love that travel is a huge part of my job and takes me to so many amazing parts of the country”. But, as we see the team spread across unique backdrops, capturing and sharing images and video, MacKenna Dunn concedes that the role is highly pressured, “We always work to tight deadlines to find the right locations quickly. So being able to review locations remotely over video calls, and receive and send big files, means I can work much quicker than I used to”.

As the day draws darker, MacKenna Dunn is seen capturing the last shot, this time the dramatic vista overlooking Loch Katrine. We hear her say “I’m so glad we have the technology that enables us to keep working through this tough time and allows me to do the job I love”.

Lloret Mackenna Dunn, acclaimed supervising location manager, says of the film: “In my job, it can sometimes take months and months to find the right location. A spot that is worthy of the script and that sings on screen. I count myself incredibly lucky to have the Scottish terrain as my backyard. It offers so much diversity – as the Film Stories show – just hours away from Glasgow, you will find highland cattle, streams, mountains, lakes, waterfalls, you name it, you can find it here.

“That’s why connectivity is so important to me – I rely on it to find, capture and share what I discover, quickly and efficiently. It’s my duty to help to put these locations on the map and convey their true beauty to directors and teams across the world. EE 5G has transformed the way I can do that.”

Jude MacLaverty, director at BAFTA Scotland, adds: “We are absolutely thrilled to have partnered with EE again this year. Undoubtedly technology has played a crucial role in allowing our industries to continue to create content and keep the nation both entertained and informed, during these challenging times. Film Stories, which EE specially commissioned for this year’s virtual BAFTA Scotland Awards, not only highlights how vital technology has been in keeping the industry connected but also beautifully showcases Scotland as a film and TV location, and we are really excited for people to see it".

Pete Jeavons, marketing communications Director at BT and EE comments: “It was a great privilege working with Lloret and her team to understand how new technologies have, and will continue, to support the film and TV industry through this period of change. Through her work, Lloret has brought eyes from across the world to Scottish shores – so it was only fitting that we bring these otherworldly locations to life on screen. In a true celebration of the nation and its talent, what better way than to premiere our short film at the live-stream of the BAFTA Scotland Awards.”

The production was supported by Julie Dunn, a locally based camera assistant, and member of BFI NETWORK x BAFTA Crew; the professional development programme that supports the next generation of film, games and television talent with insights from BAFTA-winners and -nominees, a community of peers and future collaborators, and mentoring.