SKITTLES, GAY TIMES, Switchboard and Queer Britain have team up with adam&eveDDB to to highlight historic LGBTQ+ moments, as well as help support and fill the gaps in the UK’s LGBTQ+ photography archive 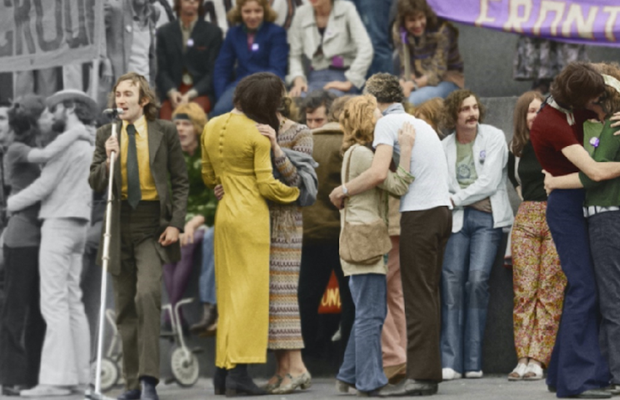 SKITTLES has today announced its ‘Recolour The Rainbow’ campaign for Pride month, as the brand joins forces with leading players in the LGBTQ+ space, Switchboard, Queer Britain and GAY TIMES, to recolour a selection of historic LGBTQ+ archive images.

As a long-standing supporter of Pride, it’s been six years since SKITTLES declared in an open letter that it would ‘Give the Rainbow’ to the LGBTQ+ community in recognition of Pride month, demonstrating that there is only one rainbow which deserves to be seen in June.

The rainbow is a recognisable symbol of pride and is also linked to the colourful SKITTLES brand. As such, every year since 2016 SKITTLES has given up its rainbow colours in order for Pride’s rainbow to take centre stage, acknowledging that it is the only rainbow that matters during the LGBTQ+ celebrations.

Renowned colourists Dynamichrome, along with SKITTLES, GAY TIMES, Switchboard and Queer Britain have collaborated to re-colour four LGBTQ+ archive images – restoring them to full colour for the first time ever, and ultimately bringing new life, visibility and celebration to each image.

The featured images are a 1971 Gay Liberation Front protest in Trafalgar Square; a Lesbian Strength March in 1985, including prominent activist Femi Otitoju; and photos capturing Pride events held in New York City in the 1970s. 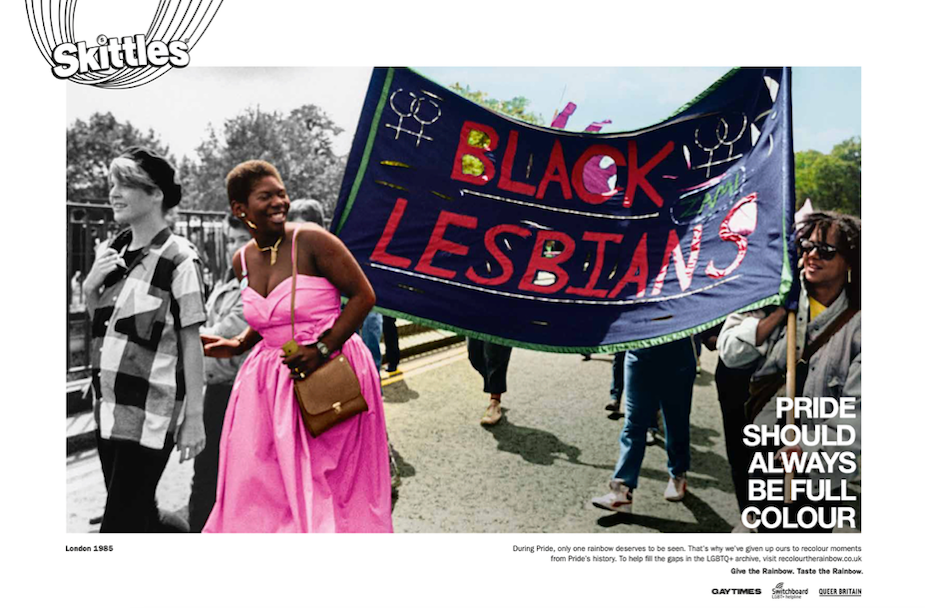 The campaign is also aiming to add to the UK’s LGBTQ+ photography archive, led by Queer Britain, as the group are calling on the UK’s LGBTQ+ community and allies to submit their black and white historical photographs of Pride’s past, a number of community photo submissions will be handpicked to be re-coloured and donated to Queer Britain. The submission portal can be accessed via www.recolourtherainbow.co.uk.

The portal has been created by GAY TIMES Group, a strategic media partner of the campaign, and sits alongside a dedicated campaign hub on gaytimes.co.uk that includes an intergenerational video series, featuring people from the images, such as Femi Otitoju, in conversation with younger people from the LGBTQ+ community. The hub will also feature a series of behind the photo editorials to bring to life the stories behind each image, along with a zine and sticker sheet to celebrate Switchboard’s history, which will also be donated to Queer Britain. 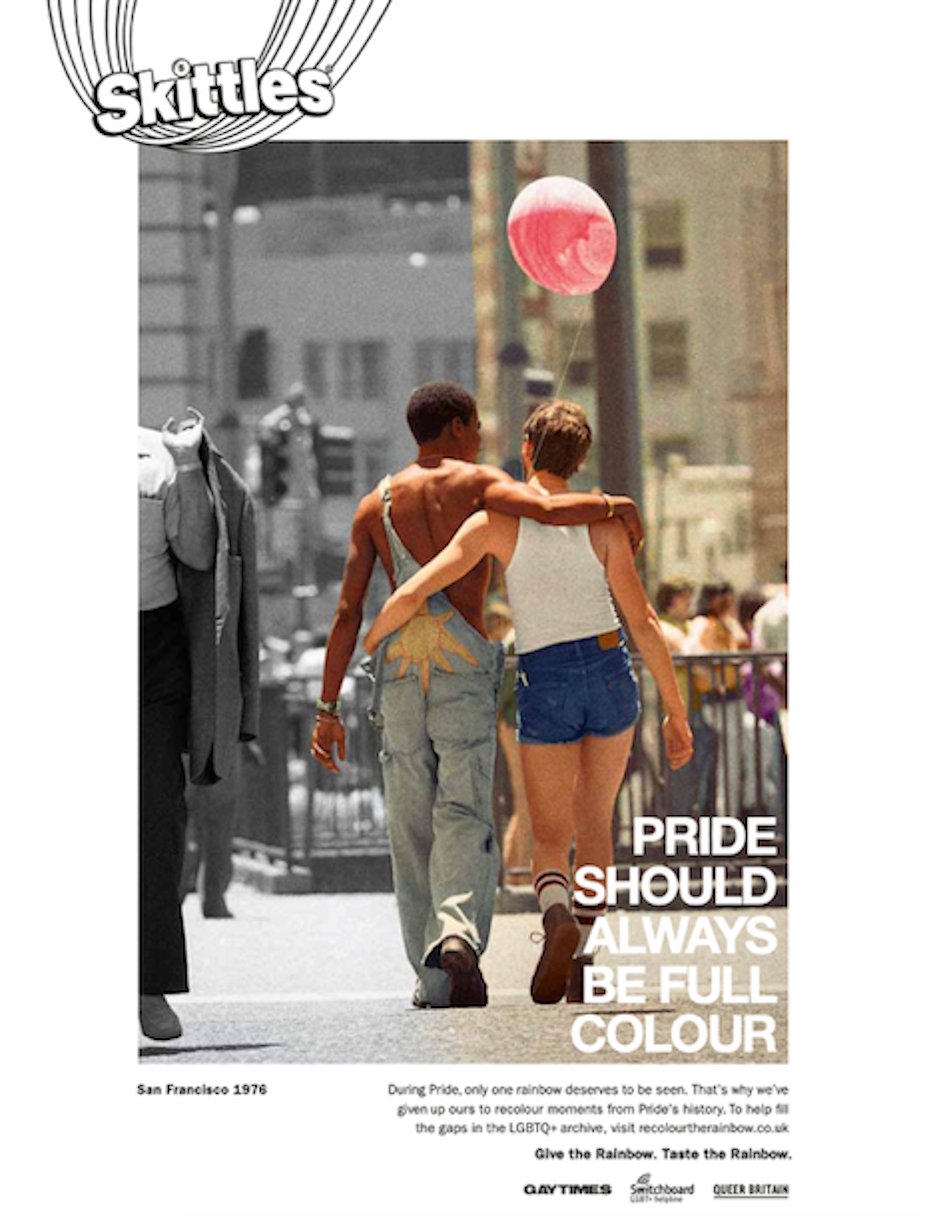 Speaking about Recolour The Rainbow, Victoria Gell, SKITTLES brand director said: “SKITTLES is passionate about advocating for the LGBTQ+ community and we’re excited to use our platform to do our part in driving visibility and celebration this Pride month. We believe that giving up our rainbow means much more than just removing the colours from our SKITTLES packs, which is why we have supported Switchboard for the last four years.  We are thrilled to continue our partnerships with Switchboard and GAY TIMES, as well as connect with new leaders in the space such as Queer Britain, to support the important work they do year-round.”

Joseph Galliano, CEO and co-founder, Queer Britain, the National LGBTQ+ Museum said: "Queer Britain is delighted to be the Cultural Partner on this exciting project that helps bring these rare images of early Prides to life for a new generation. We are delighted to be adding these to our growing collection for the National LGBTQ+ museum we are building.”

Natasha Walker, co-chair Switchboard said: "This year’s campaign is fantastic - it has really pushed new boundaries, not only highlighting our incredible heritage and LGBTQ+ history but drawing attention to the importance of reflecting on our past to push forward for a better and brighter future. At Switchboard we have been supporting LGBTQ+ people since 1974 and we have no plan on stopping. This invaluable partnership with Skittles has helped support us financially but more importantly enabled us to raise even more awareness of our helpline services so that those most in need know they have someone to turn to. I look forward to seeing what the collection creates and urge everyone to remember that this isn't just Britain's LGBTQ+ history, this is Britain's history full stop.” 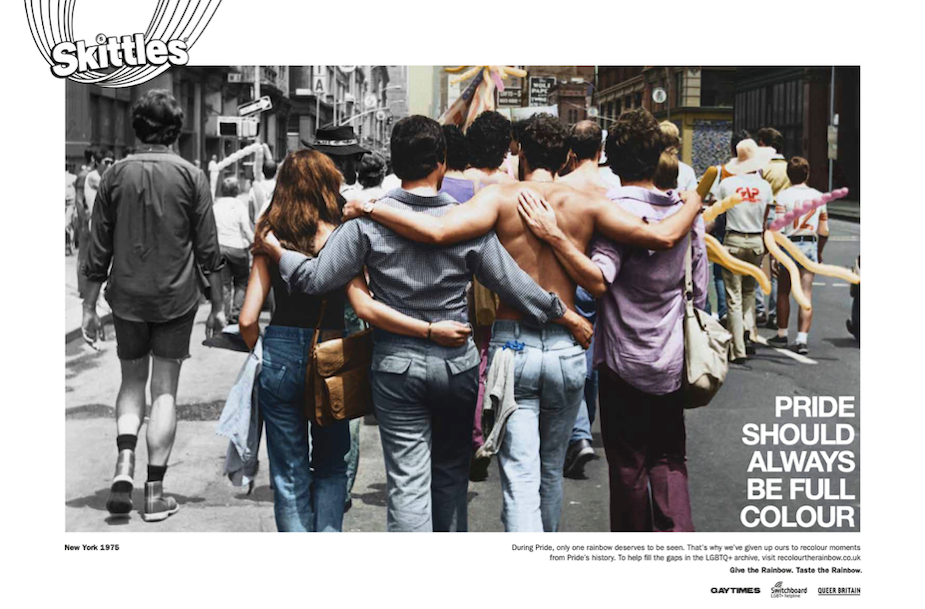 Josh Fletcher, executive creative director at GTX, GAYTIMES Group said: “Skittles has actively involved and listened to its LGBTQ+ partners, leveraging community expertise and insights to create a campaign that has real purpose, impact, and legacy. This campaign marks the start of an important and necessary conversation around the gaps in the LGBTQ+ archive while highlighting and celebrating some of the photography that does exist. Through community submissions, we hope to unearth never before seen photography that will live forever in Queer Britain's museum."

Richard Brim, chief creative officer at adam&eveDDB, said: “Every Pride, Skittles takes the rainbow off their packs, so Pride can take centre stage. This year we’ve taken this a step further by using our rainbow to restore iconic black & white photographs from Pride’s history to their full colour and vibrancy. Because what better way to celebrate Pride than to tell the stories of the movement’s first marches to a new generation of pride-goers.”

This year’s SKITTLES Pride campaign is being supported with a more than half-a-million-pound investment that will focus on experiential initiatives and the promotion of togetherness.

The campaign will be activated from the 25th June on social and digital channels. Video formats will be seen across Facebook, Instagram and Pinterest to target people whilst they are in the mindset for inspiration. OLV will also be running on YouTube pre-roll against relevant Pride content.

Alongside this, geo-targeted SKITTLES Snapchat filters will be live in both London and Manchester over the Pride parade dates.

Readers are urged to help fill the gaps in the LGBTQ+ archive by visiting Gay Times’ Recolour The Rainbow Hub.

This Pride month, it’s time to ensure the history of the LGBTQ+ community is as colourful as its future.